A quiz on the PDC professional dart players who competed in the 2010 Whyte and Mackay Premier League.

Share on Facebook
Share on Twitter
Share by E-Mail
Author
McrLove
Time
4 mins
Type
Multiple Choice
Quiz #
328,406
Updated
Dec 03 21
# Qns
10
Difficulty
Average
Avg Score
7 / 10
Plays
268
This quiz has 2 formats: you can play it as a or as shown below.
Scroll down to the bottom for the answer key.

John Part was one of the 8 players taking part in the 2009 Premier League, but did not compete in 2010. He did not qualify for the 2010 competition as one of the top 6 in the world rankings (PDC Order of Merit).
2. What reason did James Wade give for failing to win his first 5 games in the Premier League?


Answer: He was heartbroken over his split with Helen Chamberlain

James lost 3 and drew 2 of his first five matches in the league, and he claimed it was because of his heartbreaking split from then-girlfriend Soccer AM presenter Helen Chamberlain. He went on to win most of the remaining matches (he lost only 2 of the remaining 9 games) to finish 3rd at the end of the season and qualify for the playoffs.

He won his semi-final 8-6 against second place Simon Whitlock, and went down 8-10 to Phil Taylor in the final.
3. Which two players were picked as wildcards?

Adrian Lewis and Simon Whitlock were picked as wildcards by Sky Sports as they were not ranked in the top 6 players in the world. The PDC Premier League had contestants who play each other twice over 14 rounds.
4. Why is Simon Whitlock known as "The Wizard"?


Answer: Because of his long pleated hair and beard

Simon Whitlock is known for having waist length hair which is pleated using black elastic bands, and he has grown a beard and a moustache to make himself look more like a wizard. He played in his first-ever Premier League in 2010.
5. What usually happened when Mervyn King played a game in the Premier League?


Answer: The crowd would boo him for no reason

Mervyn would be regularly booed by the crowd when he walked on and throughout the game. Mervyn was known for wearing earplugs so that he could not hear the crowd and be put off by them. He played in his first-ever Premier League in 2009. The reason for booing him was because Mervyn threw a dart over Phil Taylor, while Phil was stooped down to pick up his flight that he had dropped.
6. Which player lost most of his matches at the start of the league, but came back to win the rest of his matches?

Raymond van Barneveld had lost three out of the first four matches and then lost another five matches. He came back in week 12 to win his last three matches, but was unable to make it into the playoffs.
7. Who was Phil Taylor's mentor?

Phil Taylor's occasional dart playing in his local pub grabbed Eric Bristow's eye. Phil has mentored Adrian Lewis who also comes from Stoke-On-Trent.
8. How old was Adrian Lewis when he won money while gambling in Las Vegas when he competed in the Desert Classic in 2005?

Adrian Lewis was playing at a Las Vegas casino while competing in the 2005 Las Vegas Desert Classic and won the jackpot on a slot machine but, although he was eligible in the UK as he was over 18, he was underage by US gaming laws and didn't know that to gamble the law was over 21. He was unable to claim the prize money. This event led to his nickname 'Jackpot'.
9. What does Ronnie Baxter usually have as a design on the front of his darts shirt?

Ronnie's shirts have consisted of a white union jack against the colour of his shirt, e.g black, blue, or orange.
10. What nickname did Terry Jenkins use for his matches before using 'The Bull'?

Terry used the nickname 'Tucker' for some time before changing it to 'The Bull', because he was born in Herefordshire which is famous for its bulls. 'The Gladiator' and '009' were nicknames used by James Wade.
Source: Author McrLove

This quiz was reviewed by FunTrivia editor Nightmare before going online.
Any errors found in FunTrivia content are routinely corrected through our feedback system.
Most Recent Scores
Jan 21 2023 : ozzz2002: 5/10
Jan 16 2023 : Epic97: 3/10 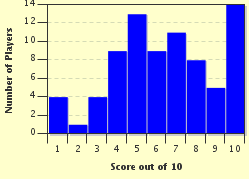 
Other Destinations
Explore Other Quizzes by McrLove