This darts quiz tests your knowledge of darts world champions. All questions are the PDC World Championships only.

Keith Deller won the title once, in 1983 with a shock win over Eric Bristow.
6. How many times has Richie Burnett won the world championship?

Bobby George went to two finals but lost both; to Eric Bristow in 1980, and John Part in 1994.
Source: Author bighands 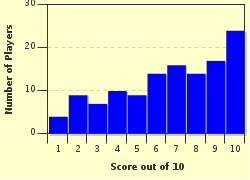 
Other Destinations
Explore Other Quizzes by bighands