Contrary to general public opinion, there is more to darts than just Phil Taylor. This quiz celebrates the times when it just didn't work out for 'The Great One'. See how much you know.

Although James Wade won the tournament, his first-ever televised tournament win, it was Jenkins who won Taylor's challenge with a stunning 17-11 win in the semi-finals. As so often happens when Taylor loses, his 3 dart average was a good 4 points higher than 'The Bull', but trebles for show, doubles for dough.
2. Who was responsible for Taylor's demise in the 2010 Players Championship Finals at the Circus Tavern?

A few weeks after his antipodean friend Simon Whitlock gave Taylor a fright in the World Championship final, Paul Nicholson shocked everybody by going one better and beating the former toilet handle maker in the semi-finals. A very shakey double 5 gave Nicholson a deserved win. He then held himself together sufficiently to beat his good friend King in the final an hour or so later.
3. As we know, Taylor rarely loses at all but it is even less common when he loses in a final. He did lose in the internet streamed Championship League final in 2009. Who won it?

At the time of Osbourne's victory, Taylor was in a rich vein of form and very few people gave the Derby man any chance of success. A huge surprise followed and Osbourne won the game. Taylor has a genuine respect for Osbourne, who he had previously beaten in the UK Open final, as he believed that Osbourne had the right attitude to be a champion.
4. The 2010 Grand Slam of Darts saw a shock result as Taylor was dumped out of the competition, after a quarterfinal loss to whom?

The 'Adonis/Magnum/Marathon Man' enjoyed his finest hour since his world title 14 years previously. Taylor had led 14-11 and looked set to go on and make it 4 straight Grand Slam wins, but Beaton produced some incredible darts in his silky style to claim the win. Sadly, Taylor blamed the crowd for his loss.

This being the same crowd which incessantly chants Taylor's name and boo his opponents throughout the season.
5. Who was responsible for knocking Taylor out of the 2008 World Championship?

Probably the lowest point in Taylor's career, his 5-4 loss to Mardle came at a time when his form was shaky to say the least. He was the width of a wire away from going out to wunderkid Van Gerwen in the first round and looked scratchy from then on. In some ways, it came as little surprise when he slumped to defeat with a pitiful 92 average. John Part went on to defeat Kirk Shepherd in one of the poorest quality finals in the modern era.
6. Who beat 'The Power' in the 2010 World Grand Prix, the double in tournament held in Dublin?

This match marked the turning of a tide as the 'apprentice' finally beat the 'Grand Master'. Taylor was, of course, a former practice partner of Lewis and is often credited with having a huge hand in Lewis's career.
7. Taylor crashed out of the 2009 Premier League playoffs at the semi-final stage, the first time he had ever failed to lift the title. Who defeated him?

King's victory was sweet revenge for the Norfolk man who had been effectively labeled the villain, in a spat between the two during a 7-7 draw in week 5 of the league phase at Newcastle. King had thrown a dart whilst Taylor was collecting a flight from the floor which angered the Stoke man.

Despite Taylor being a massive odds-on favourite for the semi-final between the two, Taylor produced an inexplicably poor performance, and King did just about enough to beat him. He lost to Wade in the final.
8. Who was the conqueror of Taylor in the 2008 UK Open finals at the Reebok Stadium in Bolton?

Barneveld was very much Taylor's bogey player over a period of a few years in the FA Cup of Darts, knocking 'The Power' out of the quarterfinals in 3 consecutive years from 2006-2008. The rivalry between Taylor and Barney is often considered the greatest in the world, following the Dutchman's code switch in 2006.

The two most celebrated players in history have shared over 20 world titles between them.
9. The 2007 World Grand Prix in Dublin saw Taylor lose to which opponent?

Whilst Taylor had won the double start competition on nine occasions, he has also suffered shock first round losses to three players, Painter in 2001, Callaby in 2004, and finally Gray in 2007. This loss was during Taylor's most barren spell. Gray was touted as a future star following this victory, but sadly failed to push on in his career.
10. After his final defeat to Osbourne in the 2009 Championship League Darts tournament, Taylor also lost in the final the following year. Who was his conqueror on this occasion?

Five of Wade's six major titles at that point had come as a result of him capitalising on other's defeating 'The Power', but this title was the exception. This victory over Taylor at the very height of his career.
Source: Author belmontrebel 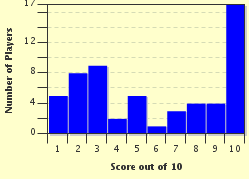 
Other Destinations
Explore Other Quizzes by belmontrebel