A short quiz about the players/characters involved in the P.D.C (Professional Darts Corporation), the Premiership of World Darts.

Quiz Answer Key and Fun Facts
1. The Master of Ceremonies in the P.D.C was whom in 2004?

Phil became Master of Ceremonies in 1992 when the P.D.C was founded, and was still warming the crowd in 2004.
2. Which one of the following was not a P.D.C referee at the World Matchplay in Blackpool 2004?

Fred, Russ, and Bruce, shared the job between them in 2004.
3. A well known face on the P.D.C circuit during 2004 was Keith Deller. With what checkout did he win the 1983 world darts championship?

Eric Bristow could have gone for the bullseye to win the leg. Instead he chose to throw a single 18 to leave himself 32, thinking that Deller would not checkout. Keith stepped up to the oche and threw treble 20 with the first dart, treble 18 with the second, and double 12, to win the 1983 championship by 6 sets to 5.
4. At which venue did Phil Taylor throw his first perfect 9 dart finish in 2002?

Not satisfied with one 9 darter in July 2002, Taylor also managed another one in Bolton at the Reebok Stadium in June 2004.
5. The darter known as Kevin "The Artist" Painter, was originally from which part of England?

Dennis "The Heat" Ovens, did not drop out of the top 32 world rankings during 2004.
8. What was the name of the song that Alan Warriner walked into the arena to during the 2004 World Grand Prix at Dublin?

Also known as "The Iceman", this Lancastrian darts player is also a fully qualified psychiatric nurse.
9. "Big" Cliff Lazarenko, a 1980s dart legend, was still ranked in the top 40 darts players in the world during 2004. He said in an interview for The Guardian newspaper in July 2004, that before a game he enjoys a pint of what to relax him?

He was the number one Scottish contender during 2004 in the wonderful world of darts.
Source: Author giantkstacks 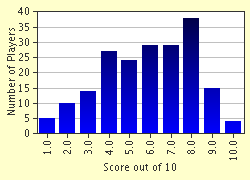 
Other Destinations
Explore Other Quizzes by giantkstacks