Over 250 dart boards were used in the tournament. Japan won the International Team Event in 2009.
2. The Professional Darts Corporation hosted the inaugural U.S. Open steel tip dart tournament in 2007. What tournament did it replace?

The first U.S. Open was won by Phil Taylor. Adrien Lewis was the runner-up.
3. The American Darts Organization was formed as the result of a meeting at which tournament in 1975?

The tournament was hosted by the Wolverine Dart Association in October 1975. The American Darts Organization was incorporated in January 1976.
4. Which city in the U.S. was the first to host the World Cup of Darts?

This took place in 1979. The tournament was the first major international competition to be held outside of Great Britain.
5. Which state was the host of the annual Space Coast Spectacular dart tournament?

Events were held for men, women, and youths.
6. The Las Vegas Open steel tip dart tournament is dedicated to what U.S. darting pioneer?

Tom was an early member of the Southern California Dart Association. The S.C.D.A. was the first English style darts organization in the U.S.
7. What was the name of the first major dart tournament held in the U.S.?

Manny is an avid dart player. His rival is Ricky Hatton whom they contested many matches.
9. Who won the Most Valuable Player Award at the 1998 Las Vegas Open?

Part won 3 of the events in the tournament. Lowe won only 1.
10. The 29th annual Las Vegas Open took place in 1998. Who won the men's cricket singles title?

The others did not finish in the top ten. No one threw a perfect cricket game that year. The women's cricket singles was won by Stacy Bromberg of Las Vegas.
Source: Author dan180dan180 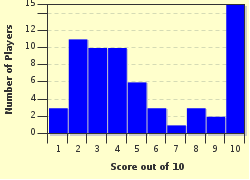 
Other Destinations
Explore Other Quizzes by dan180dan180