Ian Botham, Ian Chappell, Ian Smith and Ian Healy were all well known and respected members of their national teams. Can you identify which of the Incredible Ians accomplished which of these feats?

Share on Facebook
Share on Twitter
Share by E-Mail
Author
Beckyel
Time
5 mins
Type
Multiple Choice
Quiz #
182,484
Updated
Dec 03 21
# Qns
10
Difficulty
Difficult
Avg Score
5 / 10
Plays
815
Awards
Top 35% Quiz
This quiz has 2 formats: you can play it as a or as shown below.
Scroll down to the bottom for the answer key.

Quiz Answer Key and Fun Facts
1. Which Ian was man of the match for an unbeaten 161 against the West Indies in 1996?

This was Healy's highest test score. During his career he played 119 tests, scoring 4356 runs at an average of 27.39. He hit four centuries, two against England and one each against the West Indies and New Zealand.
2. Which Ian produced his highest test score of 173 against India in 1990?

Smith won the man of the match award for this innings, as he scored his century batting at number 9 and rescuing New Zealand from 131-7. In partnership with Hadlee, who made 87, they put on 103 for the eighth wicket. Ian Smith played for New Zealand between 1980 and 1992. He scored 1815 runs, at an average of 25.56.
3. Which Ian scored a century in each innings of a test match?

Botham scored 208 against India in 1982. He shared in a partnership of 176 with Allan Lamb, who made 107. England's total was 594 all out, and the match was drawn. Botham was given the Man of the Match award for his innings.
4. Which of the four Ians scored one double century in test cricket?

Botham scored 208 against India in 1982. He shared in a partnership of 176 with Allan Lamb, who made 107. England's total was 594 all out, and the match was drawn. Chappell scored four test double centuries - 247* against New Zealand, 235 against Pakistan, 204 against India and 201 against Pakistan.
5. Which Ian had the highest One Day International score of 86?

Chappell's 86 was hit off 67 deliveries, and included ten fours and two sixes. Australia made 265, then dismissed New Zealand for 234, giving them victory by 31 runs. The match was played in Christchurch in 1974.
6. Which of the following players hit 60 against Sri Lanka, thereby helping his team to a total of 211 and a 5 run victory?

Botham also took two wickets, dismissing Ranasinghe for 51 and DS De Silva for 8, which helped to stop Sri Lanka from reaching their target of 212. Botham was declared man of the match after this performance.
7. Did Botham and Chappell score the same number of test centuries?

Both Chappell and Botham hit 14 test centuries. Of the two, Chappell finished with more runs (5345 for Chappell and 5200 for Botham) and a better batting average, 42.42, compared with Botham's 33.54.
8. Which Ian played in the most test matches?

Smith was a talented wicketkeeper/batsman, who took 168 catches in his career. In the second test against Sri Lanka at Hamilton in 1991, he took seven catches in the first Sri Lankan innings. Healy's best test performance behind the stumps came against England in 1997, when he took six catches in England's first innings.
10. Which of the four Ians never captained his country in a test match?

Chappell captained Australia between 1972-75. Botham was the captain of England in 1980-81. Smith captained New Zealand in just one test, against Sri Lanka in 1991. Healy was Australian ODI captain 8 times, but never in a Test match.
Source: Author Beckyel

This quiz was reviewed by FunTrivia editor Dalgleish before going online.
Any errors found in FunTrivia content are routinely corrected through our feedback system.
Most Recent Scores
Jan 24 2023 : Guest 1: 3/10
Dec 16 2022 : Guest 146: 2/10 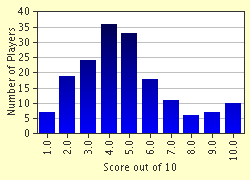