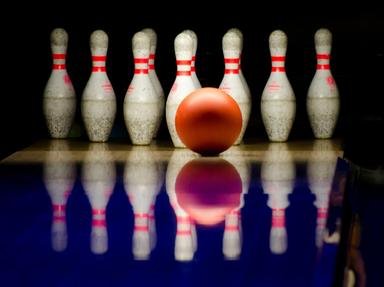 I want to get better at ten-pin bowling. The first step was through the door of my local bowling center's pro shop. Here are some questions about what you I found.

Quiz Answer Key and Fun Facts
1. The friendly bowling pro shop operator introduced himself and found out why I was there. I informed him that I was looking for a ball, bag, shoes, and that I was new to the game. He explained that the bowling balls come in a range of weights. The lightest are generally for children and people who can't handle the heavier weights. What is the range of bowling ball weights that most bowling ball companies will manufacture?

The companies which produce the bowling balls vary the density of the interior materials of the balls to vary the weight. Sixteen pounds is the maximum legal weight allowed by the United States Bowling Congress.
2. We decided that fourteen pounds would be about the right ball weight for me. Then he wondered what material the outside, or shell, of the ball I would want. I didn't know, so I asked for the options. What materials could he have mentioned?


Answer: Any of these are used for bowling balls

There have been bowling balls made out of wood! Over the years different materials have been used. Wood was replaced by hard rubber in the early 1900s. Hard polyester bowling balls started being sold in the 1960s. Urethane bowling balls came out about 1980.
3. Having decided on a lower priced model, we got down to discussing the holes in the ball. He informed me that for most people there are three basic drilling patterns which can be used. Which was not one of the drilling pattern options he mentioned?

Though he was probably the best bowler of his time, you will not find many pro shops steering the customer toward using the grip used by Ned Day. Ned only used a thumb hole and a hole for his middle finger while almost all of the bowling balls drilled today have at least two holes for fingers in addition to the thumb.

The differences in the three basic grips deal with how far apart the finger holes are from the thumb hole and the amount of fingers which are inserted in the holes. The conventional drilling is where the fingers are expected to go in the holes to the second joint from the tips while the fingertip drilling has the fingers going in to the first joint only.

The semi-fingertip drilling is somewhere in between the two drillings and is the least used drilling of the three choices.
4. We picked out the ball and decided on a conventional drilling. I was then informed that there some important things we had to measure and specifications to be decided on before the holes would be drilled. What wasn't one of the important specifications the pro shop operator mentioned for optimal fit?


Answer: The surface material of the ball

For a great fitting bowling ball, sizes, angles, and spans are critical. There are a lot of factors which go into a great fit but let's not bore you with them here. Let's just say that a well-trained bowling ball driller is worth finding if you want to have more fun bowling.
5. The ball was drilled and we enlarged the thumb a bit and rounded some of the edges of the holes, so it feels great! Which hole in the ball was the most important according to the ball driller?

Of all of the holes in a normal drilling, it is crucial to get the thumb hole drilled and shaped well. In a normal release of the ball, the thumb exits the ball before the fingers and if it comes out of the hole too early or late because of its shape or size it can ruin accuracy and ball roll.

While also important, the size and shape of the finger holes are a bit less critical and also easier to get correct. The weight or balance hole isn't necessary in the vast majority of drillings.
6. It's time to look at shoes. There such things as right-handed and left-handed shoes.

Most right-handed bowlers will slide with their left foot while releasing the ball. The sliding sole should be made of leather. In order to get better traction with the non-sliding sole, it is usually made of a non-marking rubber material. For normal lefties, the right sole will be leather and the left sole will be rubber. If you rent your shoes at the front counter there will normally be a leather sole on each shoe so either a left-handed or right-handed bowler can use them, but not get the traction from the non-sliding shoe.
7. I see a nice pair of black shoes for sale with a kangaroo logo sewn into the uppers. They're quite expensive but I curiously ask the employee why there is a kangaroo on the shoe. What does he reply?


Answer: The shoes are made of kangaroos leather, which increases comfort

You were looking at Dyno-thane's DynoRooz shoes. The company says that the use of kangaroo leather creates a stronger and lighter shoe than conventional cow leather.
8. I decide to get a lower priced pair of shoes. What feature of bowling shoes is usually offered in the higher priced models which makes them cost more?

Many models of bowling shoes, especially for better bowlers, come with heels and sole inserts which can be changed depending on how the bowler wants to slide. Since sliding conditions are different at times, a bowler can change his sliding sole and heel to try to maintain a slide with which he or she is comfortable.
9. I have my ball and shoes, now for the bag. I pick out a nice model which will hold my ball, shoes, and quite a few necessities, such as a towel and some ball cleaner. I also notice that there are quite a few bags larger than mine. "They fit more than one ball", replied the employee when asked about them. What is a possible reason for owning more than one bowling ball?


Answer: All are reasons

Bowling is similar to golf in that the environment changes from shot to shot. It may be a small change, but there is a change, and all of the small changes can add up to drastic changes in how a ball will act going down the lane over the course of a few games or a tournament.

When some bowlers travel to tournaments they don't know exactly how their equipment will act, so they like to be prepared by having a variety of different acting bowling balls with them. For those who want a "spare" ball, the ball is usually a hard-shelled polyester ball which is more predictable and easier to control, thus increasing the bowler's accuracy.
10. According to some sports commentators, "Anyone can bowl and be good at it". They try to make it sound as if the game were simple. Are they right?

Bowling, like many sports and games, is anything but simple if you want to be good at it. Trying to make it sound simple is usually just ignorance and trying to use a put-down to make yourself look better. It is also a game that a lot of people play and enjoy without having to get into the learning of the game at a higher level.
Source: Author dobbywestham 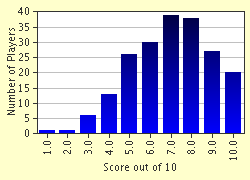 
Other Destinations
Explore Other Quizzes by dobbywestham