This is a quick easy quiz based on the Must See Tv Show "Friends". Not all questions are from the show. Enjoy!

Quiz Answer Key and Fun Facts
1. Let's begin with an easy one. What are the three main male characters on the show named?

Joey is played by Matt LeBlanc, Chandler is portrayed by Matthew Perry, and Ross is brought to life by David Schwimmer.
2. Joey once dated a girl who punched people when she was giddy. This actress was a former child star. What television show was this mystery lady on?

Soleil Moon-Frye, star of "Punky Brewster" played Joey's one time girlfriend who liked to punch people. She thought it was funny, but she didn't know she was hurting people!
3. What is the name of Phoebe's twin sister?

Ursula and Phoebe are both portrayed by Lisa Kudrow. Phoebe is my FAVORITE character on "Friends".
4. When Joey meets with the lady from 'Soap Opera Digest', Gunther takes their order. What does Joey order?

The lady made a comment on how intimate the atmosphere at the coffeehouse was and how usually the stars she interviews take advantage of the fact that Soap Opera Digest pays for whatever they eat, so usually they take her to a fancy restaurant. Joey then orders all of the muffins.
5. What creature hurts Monica at the beach?

She gets stung on the leg.
6. In the first season, Rachel was engaged to an orthodontist before she got involved with Ross. In the pilot episode, we see her run into Central Perk in her wedding dress. What's the name of her ex-fiancé?

Rachel always wanted to marry a rich doctor, "just like her father".
7. How did Ross and Carol decide on the name Ben for their child?


Answer: Nametag on a uniform

Ross and Carol's son's name is Ben, due to the nametag on a janitor uniform. Phoebe actually had on the janitor's uniform while crawling through a vent in the hospital. Susan, Carol, and Ross were fighting about what the baby's name should be, then Ross remembered the name Ben.
8. What was the color of the checkered floor in Monica's bathroom when Joey chipped the tile?

Yep, it's black and white. Joey accidently chipped up a piece of the tile in the middle of the bathroom floor and covered it with a toilet plunger.
9. What singer played "Stephanie" on the episode, "The One With The Baby on the Bus"?

Chrissie Hynde, frontwoman for The Pretenders played Stephanie. She sang in Central Perk and Phoebe got angry with her.
10. Who sings the "Friends" theme song, "I'll Be There For You"?

That should have been easy!
Source: Author PhoebeGrl21 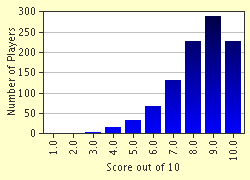 
Other Destinations
Explore Other Quizzes by PhoebeGrl21