Have fun and good luck!

Quiz Answer Key and Fun Facts
1. What song was Ross trying to learn on the bagpipes?

He wanted to play the bagpipes at the wedding because Chandler is half Scottish.
2. Name two things Phoebe bought Joey to try to drive Rachel out of his apartment.

Phoebe thought Rachel would not want to live with her anymore because she was having too much fun living with Joey.
3. When Phoebe fell asleep in Central Perk, what did she say kept her awake the night before?


Answer: her grandmother and her new boyfriend

4. When Joey and Chandler took Ross to a hockey game, who got hit in the nose by a hockey puck?

5. Who said this? "Oh, I think this is the episode of 'Three's Company' where there's some kind of misunderstanding."

Phoebe then says 'Then I've already seen this one' and turns off the TV.
6. When Phoebe found a thumb in her soda, how much money did the soda company give her?

At the end of the episode she offers the money to Chandler to stop smoking!
7. When Chandler plans on breaking up with Janice she had just been shopping. What did she buy him?

She bought them so he could mix and match 'Rocky and Bullwinkle'.
8. Why did Phoebe want to go to the beach for the weekend?


Answer: to meet her mother's friend

Her mother's friend's name was also Phoebe. She turned out to be Phoebe's actual birth mother.
9. Phoebe says her relations may have the cookie recipe Monica wants. What country are these relations from?

Phoebe's grandmother used the recipe from a packet of cookies and told her she got it from her French grandmother!
10. In 'The One With Phoebe's Uterus' what job did Joey get?

12. Where did Chandler first meet Aurora?

Chandler goes out with Aurora only to find out she's married and has another boyfriend!
13. Why does Phoebe say Ross wants to stay married to Rachel?


Answer: Because he loves her

14. What does Chandler want to turn Rachel's old room into?

15. When Ross tells everyone to sing along with him while he's playing the bagpipes. Which friend tries to?

She doesn't actually sing, she imitates the bagpipes.
16. Who sees Janice kissing her ex-husband?

Monica and Joey go back to the 'Mattress King' to return the race car bed that Phoebe accidentally signed for!
17. In 'The One Where No-one's Ready' a woman left a voice message on Richard's answering machine. Who was it?

18. In 'The One With Ross' Teeth' Ross has a date with a girl Monica works with. What is her name?

Ross puts gel on his teeth to make them white and left it on way too long and he spends the whole date covering his mouth!
19. Joey once hired someone to be his identical twin for a medical study. What was his name?

20. In 'The One Where The Underdog Gets Away' where do Ross and Monica's parents go for Thanksgiving? 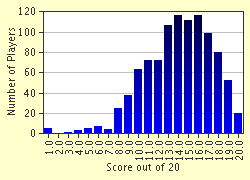 
Other Destinations
Explore Other Quizzes by alice22