Full name: Rachel Karen Green
2. Rachel decided that Barry looked like a child's toy. Which toy did she say he looked like?

Mitchell Whitfield played Barry Farber (Finkle in the pilot episode).
3. What song did Rachel sing at Barry and Mindy's wedding?

It was to make up for an embarrassing moment for her when she was younger, when she was supposed to sing the song at another event but couldn't.
4. When Ross, Chandler, and Joey went on a ride along with Phoebe's boyfriend Gary a car backfired, which they all thought was a gunshot. Whose life did Joey 'save'?

Chandler was very upset that Joey did not try to save him, so Joey explained that he was really saving his sandwich.
6. "The One With The Ride Along"- Monica and Rachel were at Ross' apartment when he called home to leave himself a message. What did he remind himself to buy?

He also said something about not taking life for granted because he thought he had just had a near death experience.
7. When Monica first met Joey, what did she invite him into her apartment for?

He thought lemonade meant sex.
8. What did Ross give to Ugly Naked Guy, when he was trying to get his apartment?

He gave him a basket of mini muffins. I think someone else gave him a bike though. Ross still got the apartment.
9. Which of Joey's sisters did Chandler fool around with?

Chandler couldn't remember which one it was.
10. Which of these characters wasn't able to ever look right in a picture?

When Monica and Chandler were having their engagement pictures taken, we discovered that Chandler cannot look natural.
11. Who had a job as a charity 'bell ringer' in a Christmas episode?

Phoebe loved it until she got fired, because she was yelling at people who left anything other than money in her bucket.
12. What was the first name of Monica's roommate before Rachel?

In one of the first episodes, Phoebe was gradually moving out so that Monica wouldn't notice.
13. What was the name of Phoebe's friend, who she brought over for Rachel when she was 'erotically charged'?

Rachel was not too happy about that.
14. Where did Rachel work when her boss was Mr. Zelner?

She worked for him from seasons 5-10. Steve Ireland played Mr. Zelner.
15. According to Ross, why did he major in paleontology?


Answer: He was dared to

He told this to Ben before he was born.
16. When Monica and Chandler went away, before anyone knew about the two of them, they saw someone famous. Both of them told Joey that they saw this person and that was one of his clues to figuring out their secret affair. Who did they see?

He put this information together with the fact that Monica said she forgot her eyelash curler, and the hotel had called Chandler about an eyelash curler left in his room.
17. Who really created the recipe for chocolate chip cookies that Monica thought Phoebe's dead grandmother created?

Monica made over ten batches of cookies trying to get the recipe right until Phoebe told her where they came from.
18. In the episode where Monica and Chandler got married, Joey was playing a character in which major war?

As Monica, Phoebe, and Rachel were sitting around the table on the morning of Monica and Chandler's wedding, Joey said he was off to fight the Nazis. Rachel informed him that we didn't fight the Nazis in WWI. No one there knew who 'we' fought against in WWI, and one of the girls suggested Mexico, which they all agreed to. Not even close.
19. In the episode where they all played the game to see who knew whom best, what was the last item in Rachel's shopping bag that then led to them playing the game?

Chandler and Joey knew this because they had used the last of the tape.
20. Which one of Ben's moms did Phoebe pretend to be to try and meet Sting?

The teacher had already met Carol, so Phoebe said she was Susan.
21. What physical ailment landed Joey in the hospital when Phoebe was having the triplets?

Ross stayed with him while everyone else stayed with Phoebe.
22. In what order were Phoebe's triplets born?

Phoebe was the surrogate for her brother Frank and his wife. Chandler ended up being a girl, much to the dismay of the original Chandler.
23. Ross, Joey, and Chandler made a list comparing Julie and Rachel. When it came to the cons for Julie, they put: She's not ___________(the answer that was on the paper, not what Ross actually said)?

Chandler misspelled it and Rachel thought that was some paleontology phrase that she didn't understand because she was 'just a waitress'.
24. How many sisters does Rachel have?

We met both of them throughout the series. Reese Witherspoon played Jill, and Christina Applegate played Amy.
25. The first time Monica, Phoebe, Chandler, and Joey got stuck in Monica's room during a Rachel and Ross fight they didn't have any food. Joey put a box of things in there in anticipation of being stuck there again. What did Phoebe claim as her own when Joey pulled the box out?

She was very excited about the "Mad Libs". She'd never eat a Slim Jim unless she was pregnant, which was the one time we saw her eat meat.
Source: Author browndog 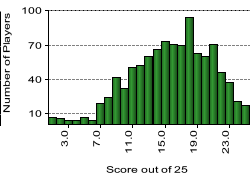 
Other Destinations
Explore Other Quizzes by browndog