Welcome to my zoo. Test your brains with these questions regarding animals featured on 'Friends.' Just remember, don't feed the animals!

Quiz Answer Key and Fun Facts
1. Joey once decided to get Chandler a chicken for Easter. When Joey showed Chandler for the first time, what was Chandler's response?

Joey bought the chicken for $5 after seeing an article on the news about people buying chickens. Joey missed the article's contention, as he didn't hear the reporter say, "most of the little guys wouldn't live to see the 4th of July."
2. Danny, recently back from a trek in the Andes, moved into the same building as Monica and Rachel. When in the basement, what mythological creature did Rachel call Danny?

The lights went out, and Danny surprised the girls. In a panic, Rachel set a bug-bomb on Danny. Danny later had to cut his wild and bushy hair to get rid of the "fogger smell."
3. When Tommy, played by Ben Stiller, was going out with Rachel, he was known for shouting at strangers. When Tommy was yelling at Joey and Chandler's duck, which of these words didn't Tommy use?

Whilst Tommy had an anger problem, Ross was the only friend aware of this. Until Tommy snapped at the birds, everyone else thought Ross was jealous or paranoid.
4. Ross and Monica had a dog, when they were children, named Chi Chi. Ross once revealed that Monica couldn't get braces because of what?

Monica was unaware of this, but was told it was her fault. Ross confirmed that Monica was "the two hundred pound eleven year-old who rode her."
5. While deciding whether to use Chandler's savings for the wedding or the future, Chandler told Monica what he saw in their future. When Chandler was telling Monica of the vision he saw of their future, Chandler said they had which type of animal?

Monica, after telling him that they should save for their future, asked if he meant dog. We discovered in a different season that Chandler is actually afraid of dogs.
6. Ross' monkey, Marcel, was sent to the San Diego Zoo, but later broke into show business. When Ross tracked Marcel down, what movie was Marcel filming at the time?

The movie also starred Jean-Claude Van Damme. Joey also ended up scoring a minor role as a virus victim.
7. While on a date, Rachel couldn't stop talking or thinking about Ross and Julie getting a cat so soon in their relationship. When Rachel called Ross to prove she was over him, what did she suggest as a name for their cat?

Michael was the name of the guy Rachel was on the date with during the phone call. Because of Rachel's message, Ross began to think of Rachel and himself again, and eventually broke up with Julie to be with Rachel. And Ross and Julie never did get that cat.
8. When the 'Friends' gang went to the beach so Phoebe could meet a friend of her mum, the group comments on how loud Ross and Bonnie had been the night before. Chandler told the others that which animal had came up to the house during the night?

Rachel later convinces Bonnie to shave her head again, and Ross and Rachel ended up getting together again. However, Ross fell asleep reading a letter Rachel wrote, and agreed to something without knowing. Ross and Rachel broke up soon after returning home.
9. After all the years that Chandler had paid for almost everything for Joey, Joey decided to give Chandler some money as an initial payback. What did Chandler say he could get because of the money?

Joey also gave Chandler a gold bracelet, with the words 'To my best bud' engraved on it. Chandler lost the bracelet, bought a replacement, then found the original one. Despite hating it from the start, Chandler wore his and gave the other one to Joey. Joey colourfully referred to them as "Bracelet Buddies."
10. Phoebe once got a job singing songs for children, however sang songs telling kids the harsh truth. After the parents complained, she sang a song about farm animals. What was the first animal she sung about?

The cat belonged to a little girl, and none of the friends wanted to tell Phoebe the truth. Ross ultimately told her the truth, and Phoebe gave the cat back to the girl.
12. Over the years, Rachel mentions many pets she has had. Which of these pets hasn't she had?

Rachel vacuumed up her hamster. A car hit her dog, and we don't find out what happened to her pony. Rachel is scared of fish for those of you who didn't know.
13. Although vegetables are not animals, I decided to include a question on them as they are living things. During one Thanksgiving, Phoebe made flying noises while holding a dish of food in Chandler's direction. Chandler, who hates Thanksgiving, claimed it wasn't funny. What type of food was this?

After his parents divorced on Thanksgiving when he was 9, Chandler has never eaten any Thanksgiving food. This was a recurring theme in most seasons of 'Friends'.
14. When Ross was pining after Rachel, Phoebe said everything would work out. Ross asked her how she knew, and in response she compared Ross and Rachel to which animals?

Phoebe claimed lobsters fell in love, and mated for life. According to Phoebe, old lobster couples walked around their tanks holding claws.
15. Which of these animals was never been seen on 'Friends'?

Ross dressed as an armadillo for Ben when he couldn't find a Santa costume. Phoebe got Joey a tarantula for Christmas to try and scare Rachel out of the apartment. And Rachel once bought a Sphinx Cat because she had always wanted one, but ended up selling it to Gunther. Thanks for playing.
Source: Author ace_zeke 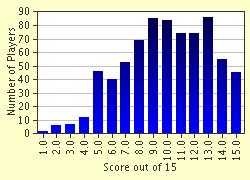 
Other Destinations
Explore Other Quizzes by ace_zeke