Do you remember the following shows from the 1980's. This quiz shouldn't be too hard. I hope you will have fun with it.


Answer: 'The Facts of Life'

George Clooney was a semi-regular on this show.
2. On 'Family Ties', who played the role of Alex P. Keaton's (Michael J. Fox) girlfriend in a few episodes?

'Family Ties' aired from 1982 to 1989. Meredith Baxter (Elise), Michael Gross (Steven), Justine Bateman (Mallory) and Tina Youthers (Jennifer) were the other regulars.
3. Two of my favorite shows of the 1980's were 'Cheers' and 'Night Court'. Which of the following stars won the most Emmys for their role on these shows?

John Laroquette (Dan Fielding on 'Night Court') won 4 Emmys. George Wendt (Norm on 'Cheers') was nominated 6 times but never won. John Ratzenberger (Cliff on 'Cheers') received 2 Emmy nominations but never won either. Markie Post played Christine Sullivan on 'Night Court'.
4. Robin Williams and Pam Dawber starred on 'Mork and Mindy' from 1978 to 1982. Who played the role of Remo DaVinci on that show and later played the part of Eddy Lebec on 'Cheers'?

Eddy Lebec was the hockey goaltender who married Carla on 'Cheers'. Tom Poston starred on 'Mork and Mindy' and he later was a regular on 'Newhart'. James Noble was Governor James Gatling on 'Benson' (1979-1986). Fred Dryer starred as Detective Sargeant Rick Hunter on 'Hunter' (1984-1991).
5. A Mediterranean sheepherder comes to the United States and lives with his distant cousin in Chicago. Which show was this?

The show aired from 1986 to 1993. Bronson Pinchot (Balki) and Mark Linn-Baker (Larry) were the main characters. Balki loved to say: 'Don't be ridiculous!' Here are a few other gems said by Balki: 'New York City, the Big Banana' and 'That's the straw that broke Glen Campbell's back'.
6. An ex-model and a private detective run the Blue Moon Detective Agency. What is this television program?

Bruce Willis and Cybill Shepherd starred in this show from 1985 to 1989.
7. Stephanie Zimbalist played in two detective shows in the 1980's: 'Remington Steele' and 'Hunter'.

She was Laura Holt on 'Remington Steele'. Pierce Brosnan played the title role on that show. It was Stepfanie Kramer who starred in 'Hunter'. She played the role of Detective Sargeant Dee Dee McCall alongside Fred Dryer.
8. This show was about a struggling actor and substitute teacher. Howard Hesseman and Robin Givens starred.


Answer: 'Head of the Class'

Howard Hesseman played Charles Moore, the teacher. Robin Givens (who once was married to boxer Mike Tyson) played Darlene Merriman, a student.
9. Who played the role of Frankie, the Governor's joke writer, on 'Benson'?

'Benson' (Robert Guillaume) was on the air from 1979 to 1986. It was a spin-off from the comedy 'Soap', a popular comedy of the 1970's.
10. Colt Seaver, a Hollywood stuntman, moonlights as a bounty hunter with his nephew Howard Munson (Douglas Barr). Name the TV show.

This show was on the air from 1981 to 1986. Heather Thomas also starred and played the part of Jody Banks.
Source: Author Mr.Gazoo 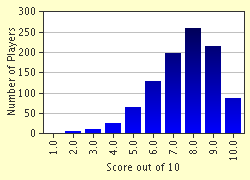 
Other Destinations
Explore Other Quizzes by Mr.Gazoo