I'll name a character or characters, you tell me what show they appeared on.

Quiz Answer Key and Fun Facts
1. The Seaver family, including Mike, Carol and Ben were on what show?

"Growing Pains" debuted in 1985 and ran for seven seasons. The show followed eldest son Mike Seaver as he navigated growing up, in later years the focus shifted to his younger siblings.
2. Michael Knight and K.I.T.T. appeared in what show?

Starring David Hasselhoff as Michael Knight, the show ran from 1982-86 in the U.S.

The show put Knight inside a specially built Trans Am that had more gadgets than a typical "James Bond" car. Knight and the car solved various crimes in each episode.
3. Tony, Angela, Mona and Sam were all together in which show?


Answer: Who's the Boss?

Starring Tony Danza and the break out role for Alyssa Milano, "Who's the Boss" was an instant hit from its debut in 1984 until it went off the air in 1992.

The premise had Tony and his daughter Sam (Milano) move in with a highly successful female advertising executive, Angela, to be her housekeeper. Of course having a male housekeeper led to interesting story lines throughout the show.
4. Mike Torello often battled crime boss Ray Luca in what show that ran from 1986-88 on the US airwaves?

The show struggled for ratings with the more popular "Miami Vice" airing at the same time in the United States. Due to the struggle for ratings, the critically successful show was short lived.

The Fraggles on "Fraggle Rock," were created by Jim Henson and first aired in 1983.

The Fraggles were a follow up to "The Muppets," which had gone off the air two years prior, but had nothing to do with those characters other than having similar design elements.

The show used puppets and its flights of fancy to educate younger audiences on real world problems like prejudice, religion and other topics that children might not normally be interested in learning about.
6. This show ran for 139 episodes. Only two characters, Angus and Pete, appeared in more than 25 episodes over the run. Name that show.

Angus MacGyver was the only character to appear in every episode of the "MacGyver," which ran from 1985-1992. Two made for TV movies were also produced after the show went off the air.

Starring Richard Dean Anderson as the titular character, the show followed the special agent who refused to carry a gun. Fortunately for him, an advanced knowledge of science and technology allowed him to built contraptions and tools out of everyday objects around him.
7. This British comedy paired Jim Hacker, Humphrey Appleby and Bernard Woolley as the three main characters.

Jim Hacker, played by Paul Eddington, was the top billed character in both "Yes Minister," and the spin off "Yes Prime Minister," both of which aired originally in the 1980s.

The show was a satirical look at British politics, set int he fictional Department of Administrative Affairs.
8. Jessica Fletcher was a former high school English teacher in what series that ran from 1984 to 1996 in the US?

Angela Lansbury starred as Jessica Fletcher on the show for more than 250 episodes over the 12 year run.

The character was a retired high school English teacher with a penchant for solving crimes. Murder seemed to follow her around wherever she went, and she was always the first to solve the crime.

Early in the series, the show was about her exploits solving crimes and writing about them, in later episodes, the character was simply narrating one of the books she had written. It wasn't always made clear if the viewers were to think she had lived through that crime, or made it up for the book.
9. Howling Mad Murdock, Face, B.A. Baracus and Hannibal were on what show?

Airing from 1983-87, "The A-Team" followed a group of vigilantes that were wanted by the US Government.

The premise of the show was the group traveled from city to city helping those who can't help themselves, all the while avoiding contact with local and national law enforcement.
10. Alex P. Keaton and the rest of his family were the focus of this show.

Fox was the break out star of the show, launching into a film and TV career that saw him become one of the most famous actors in the world until he was forced to semi-retire due to his diagnosis of Parkinson's Disease. 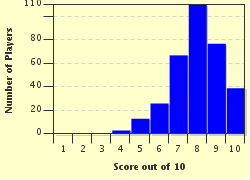 
Other Destinations
Explore Other Quizzes by TMfanNT