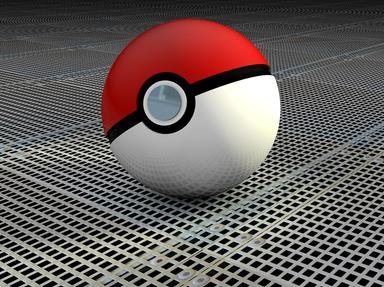 Pokťmon designs have gone a bit crazy over the years. In this quiz, all you need to do is identify if the Pokťmon listed are based on some sort of animal or, alternatively, some sort of mineral or non-animal substance. Good luck!

This poison-type Pokťmon from "Black" and "White" is quite indicative of the direction taken with later-game Pokemon introduced into the fold. Showing up at #568 in the National Pokedex, Trubbish is the trash bag Pokťmon, named as such because he is-- yeah-- a trash bag.

While one could look back to early generations and see that creatures like Muk and Grimer existed, Trubbish's background explicitly involves chemical reactions. It evolves into a trash heap Pokťmon, Garbodor.
2. Mudkip

One of the three starter Pokťmon in "Pokťmon Ruby", "Sapphire", and "Emerald", Mudkip is a water-type Pokťmon designed to reflect an axolotl (or a Mexican salamander), which is a unique amphibian often used as an unconventional terrarium pet. Considered the mud fish Pokťmon, Mudkip evolves into Marshtomp and then into Swampert, eventually bulking up to have a bit of a better center of balance.

As these Pokemon evolve, they also tend to take on more ground-type moves.
3. Cofagrigus

Evolving from the ghost-type Pokťmon Yamask, Cofagrigus takes on the form of a large coffin or a sarcophagus indicating that it's very much not an animal creature. Appearing in the fifth generation of games, Cofagrigus is #563 in the National Pokedex and, because of its preoccupation with death, has mostly ghost-type moves. According to the grim Pokedex entry for this specific creature, it eats people and turns them into mummies which, I must admit, is horrifying.
4. Honedge

Honedge is a steel-type Pokťmon, and while these types were initially introduced back in the era of "Pokťmon Gold" and "Silver" (at least a teeny-tiny bit), Honedge, at #679 in the National Pokedex, was introduced in the "Pokťmon X" and "Y" era. 'The Sword Pokťmon', Honedge is also ghost-type and, as an animated weapon, bases much of its fighting style around slashing and cutting attacks with occasional dark and psychic techniques.

It evolves naturally into Doublade (two swords!) or Aegislash (a royal sword!) when a Dusk Stone is used to help it evolve.
5. Chandelure

'The Luring Pokťmon', as it's known (as if that's not terrifying), Chandelure is another later addition to the Pokedex, appearing in slot #609, implying release in the era of "Pokťmon Black" and "White". Chandelure is a final evolution since a Litwick is evolved into a Lampent before becoming a Chandelure, implying that candles grow up to be lamps and then age into a mature chandelier. What's weirder still is that, as a ghost/fire-type Pokťmon, Chandelure is known for hypnotizing people, burning their spirits, and leaving the body. You know, like safe things do.
6. Sandslash

Sandslash, despite being a spiky Pokťmon that seems to derive from the ground, is actually based on a pangolin, an anteater-like creature with a scaly exterior. Evolving from Sandshrew, Sandslash is a fearsome foe who attacks with his claws. First appearing in the original Pokedex from the Kanto region, this Pokťmon was originally only found in "Pokťmon Blue" (and "Pokemon Yellow").

In "Pokťmon X" and "Y", an Alolan form of Sandslash appeared, taking on an ice/steel-type instead of the expected ground-type.
7. Klefki

Known as 'The Key Ring Pokťmon', Klefki is another great indication of some of the direction taken with later-generation creations since this one appeared during "Pokťmon X" and "Y", taking slot #707 in the Pokedex. While it's probably apparent that, as a keyring, Kelfki is a steel-type Pokťmon, it may also surprise players to know it has fairy-type qualities as well, learning more fairy-type techniques than steel. With reason, Kelfki is said to generate a jingling sound when approaching. Because it's a set of keys.
8. Luvdisc

Aquatic Pokťmon in the games, by and large, tend to reflect the appearances of existing sea life, and while Luvdisc appears to be a unique creation due to its unique shape (a heart), it's based on a real fish known as the kissing gourami, a Southeast Asian fish known for its pursed lips. Luvdisc is a Pokťmon which first appeared back in "Pokťmon Ruby", "Sapphire", and "Emerald", and at #370 in the Pokedex, it's known as 'The Rendezvous Pokťmon', which is weird, I think, because of the implications. Par for the course at this point.
9. Doduo

This 'Twin Bird Pokemon' appeared back in the early days of the game, showing up during the first generation of Pokťmon in #84 of the original Pokedex, though not actually appearing until closer to the midway point of the game (when you're on your way to Fuchsia City and the Safari Zone). Meant to look like an emu, Doduo is a flightless bird with long legs, two long necks, and two heads.

When this creature evolves, he naturally takes on a third head and becomes Dodrio, because as many famous biologists have stated in the past: "three heads are better than two". No problems there.
10. Miltank

Known for its horrifying Rollout usage in the third gym of "Pokťmon Gold" and "Silver", Miltank is a normal-type Pokťmon meant to reflect a cow. All Miltanks are female, as per the games, and are said to be a gendered counterpart to the roaming bull Pokťmon Taurus, known for being found in great quantities in the Safari Zone. Miltank is said to supply a healthy milk that can heal Pokťmon of their ailments.
Source: Author kyleisalive


1. Animal or Mineral Easier
2. California or Bust Enhancement Average
3. Is It, or Isn't It? Tough
4. Duck and Dive Easier
5. By Hook or By Crook Average
6. Fact Or Fiction Tough
7. Still And Sparkling Average
8. Lemon or Lime Average
9. All or Nothing Average
10. Friend or Foe Very Easy
11. Card or Cash Easier
12. Spicy or Mild Very Easy