I've Been Workin' on the Railroad Quiz

Railroads have been an important part of the development of nations, the expansion of frontiers and the dreams of children and adults alike. All aboard for a quick ride on the Trivia Railroad.

Quiz Answer Key and Fun Facts
1. Richard Trevithick is credited with having built the first steam locomotive. In what time period did this happen?

In 1804, this locomotive was used to power a tram. Trevithick built this locomotive with the financial sponsorship of Samuel Homfray.
2. In United States Code, Title 49, Subtitle V, Part C, Chapter 247, Section 24701, what rail system is tasked with operating a national rail passenger transportation system?

Amtrak is the system of passenger trains that spans the United States. Union Pacific is a major freight carrying system. Reading RR is probably best known from a board game, and the Shinkanses is the Japanese organization that operates the famous bullet train.
3. In railway parlance, what is a roundhouse?


Answer: A building for service and repair of train engines

So called because of its circular construction, a roundhouse has a central turntable that allows entire locomotives to be turned while still on track. This enables them to be placed into repair bays located around the circumference of the building.
4. I used to be at the end of pretty much every North American train. Nowadays, I'm all but gone from the rail scene. What am I?

On North American trains, the caboose was primarily used as the offices and sleeping quarters for the train crew. With the event of greater automation and the reduction of crew sizes, the need for a caboose was eliminated.
5. What type of railroad car is used for the transport of liquid and gaseous cargo?

Tankers are often designed for a specific cargo. For example, one type of car is used for the transport of milk, and is designed much like a stainless steel bottle. On the other hand, a tank car used to transport liquid natural gas has pressure relief valves, special safety couplers and protective domes covering the access ports.
6. Train tracks are constantly checked for damage and aging. What would be the probable result of a track having several feet of missing rail?

A derailment, which is an event where the cars leave the track in an uncontrolled, often destructive manner, would probably take place. Even at the slowest speeds, a moving train carries a huge amount of momentum. Any significant damage to the rails can allow that momentum to carry the train off the tracks.
7. You might think I'm talking about cows on roller skates, but what am I actually referring to when I use the term rolling stock?


Answer: Any car that is part of a train

Rolling stock includes anything that is part of a train and has wheels on a track. This includes the locomotives, freight cars, passenger cars and specialized equipment cars.
8. If you like railroad bridges, you should go and see the longest one in the world. But in which country can it be found?

The Wuhu Yangtze River Bridge has the distinction of being the longest train bridge in the world. At a length of over six miles, this is a record that is likely to be around for many years to come.
9. Many trains have specific names assigned to their route. What is the name of the train that connects Chicago and a port city in Louisiana, made famous by singers such as Arlo Guthrie and Johnny Cash?

The City of New Orleans starts off at Chicago Union Station. A distance of 929 miles later, it arrives in New Orleans. It is part of the Amtrak service, and uses tracks that were once a part of the Illinois Central Railroad System.
10. Sometimes trains need a little extra traction to climb grades. What substance can be placed on the tracks to provide that extra grip?

Sand is placed on tracks, either by special trains going along the lines to preceed the larger trains, or by the locomotives themselves. This process is of greater use for climbing grades, such as mountain passes. For environmental conditions, such as ice, snow and debris, other methods are used, such as compressed air, water jets and even lasers.
Source: Author Xallenger 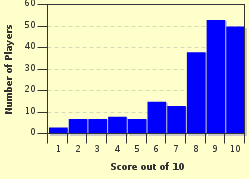 
Other Destinations
Explore Other Quizzes by Xallenger