Railways of the World Trivia Quiz

Come on a photographic tour of railways around the world.

Quiz Answer Key and Fun Facts
1. We start with the preserved Strathspey Railway which runs 10 miles from Aviemore to Broomhill via Boat of Garten. In which country can you ride steam and diesel trains on this line?

The Strathspey Railway runs over 10 miles of the former Inverness and Perth Junction Railway, which was later part of the Highland Railway in Scotland. The line itself dates back to 1863 and the Strathspey Railway Company was established in 1971 following British Rail closures. It is one of only a handful of the old main lines to be preserved in Britain.
The photograph shows a train leaving Station enroute for Boat of Garten with the hill of Craigellachie in the background.
2. The photograph shows a re-powered Hitachi M5c diesel-electric locomotive stopped at Aluthgama Railway Station. In which Asian country could you ride this express west-coast service?

The West Coast mainline of the Sri Lanka Railway runs 100 miles from the administrative capital, Colombo, to the south-coast city of Galle and then onwards to the terminus at Matara. Aluthgama is a popular coastal tourist destination in the Kalutara district of Western Province. Sixteen Hitachi-built Class M5 diesel-electric locomotives replaced steam engines on the Sri Lanka Railway in 1979.

The newer sub-class M5c locomotives are similar to the originals but fitted with Caterpillar prime movers, hence their nickname amongst Sri Lankan railway enthusiasts, "Cats".

They have a top speed of 60 mph.
3. Our next photograph shows a train arriving at the Nahariya Train Station, the terminus for the North-South Coastal Line and the northernmost railway station in which Middle Eastern country?

With a population of just over 50,000, Nahariya is the northernmost coastal city in Israel. The city sits astride the Ga'aton River, called "nahar" in Hebrew from which the city gets its name, the city was founded by German Jewish immigrants in 1935.
The Coastal Line provides an intercity service between Nahariya and the towns and villages of the Western Galilee region in the north to Haifa and Tel Aviv in the south. This is the busiest line on the Israel Railways network.
The northern part of the line was originally built as far as Acre by the British in the 1920s and was then extended in the early 1940s by soldiers from the South African and New Zealand armies across the border to Beirut and Tripoli in Lebanon. The tunnel connecting the line to Lebanon was subsequently blocked after the 1948 Arab-Israeli War and has never been re-opened.
4. The photograph shows one of the two 1966 "Yellow Birds" that operate regularly on the 51-mile Conway Scenic Railroad, a heritage railway located in which U.S. state?

Preservation efforts started in 1974 and Mountain Division operations of the Conway Scenic Railroad began in 1995. The heritage railway located in North Conway NH now runs three regular services. The first two, known as the "Valley Trains", take passengers either on a 55-minute round trip south to Conway (a route that was once part of the Boston & Maine Railroad), or on a 105-minute journey north to Bartlett and back. Passengers can choose the dining car, the 1898 open-deck observation car or one of several restored heavyweight carriages, many of which date back as far as the 1920s.
More adventurous travelers chose the "Notch Train", which takes a 5-hour round trip to Crawford Depot, extended by a further half hour during the fall foliage season when the journey goes to Fabyan Station, near Bretton Woods in the town of Carroll. This is a route that used to be part of the Maine Central Railroad.
The railway also runs special "Polar Express" trips during December.
The pictures locomotive, number 252, is an ex-Boston & Maine unit that was acquired by the Conway Scenic Railroad in a 2010 trade with Pan Am Railways (based in nearby Massachusetts). It had pulled the last regularly-scheduled freight train through Crawford Notch in 1983.
5. This photograph shows a train on the 23-mile Kuranda Scenic Railway, which runs through the Barron Gorge National Park in which country?

Construction of the railway between Cairns and Kuanda in northern Queensland, Australia, began in 1882. Fifteen hand-made tunnels and 37 bridges were required to enable the locomotives to climb from sea level to an elevation of more than 1,000 feet, and many lives were lost in the construction process that took almost a decade.

The first passenger trains began operating on the route in 1891. Tourist trains began running on the same route 1936 and today they are the only ones running on this route. Traveling through rainforest of Barron Gorge National Park, the train stops at an overlook of the 750-foot high Barons Falls, where passengers can disembark to take photographs and enjoy the scenery.

Here is where the Barron River descends rapidly from the Atherton Tablelands to the Cairns coastal plain, although the falls are at their most spectacular after heavy rainfall and it is possible to arrive here and see only a trickle.
6. Opened in 1970, the Prairie Dog Central Railway is a heritage railroad that operates on the outskirts of which Canadian city?

Operating on track built in the early 20th-Century for the Canadian Northern Railway, the The Vintage Locomotive Society began operating the Prairie Dog Central Railway as a heritage line in 1970. Based on the outskirts of Winnipeg, Manitoba, it runs a 4-hour round-trip service with a stop in the town of Grosse Isle on weekends and holiday Mondays during the summer months. Special "Howlin' Halloween Express Trains" operate in late October.
7. The photograph shows a train arriving at Intragna train station in Ticino, Switzerland. In which country is the non-Swiss end of the 32-mile long Centovalli Railway?

Founded in 1923, the Centovalli Railway is a metre-gauge line with 22 stations between Locarno on the northern tip of Lake Maggiore in the Swiss canton of Ticinoin and the city of Domodossola in the Piedmont region of Italy.
One of the stops on the route is at the historic village of Intragna, which dates back to Roman times. Like most mountain railways, there are some dramatic inclines and it takes just over an hour and a half to travel the entire 32-mile length of the route. The name itself sums up the picturesque nature of the trip -- "Centovalli" means 100 valleys.
8. The 130-mile line that is a now a tourist route known as "The Train to the Clouds" was originally constructed to service the borax mines. Through which range of mountains could you ride this service?

It is known as the "Train of the Clouds" because clouds can often be seen beneath the bridges over which the route passes. Although construction began in 1921, the entire line was not operational until 1948. The curved "La Polvorilla", the highest of the route's 13 viaducts at 13,850 feet above sea level, was finished in 1932 and is today a highlight of the trip for tourists.

The trip through the Argentine Andes crosses 29 bridges and passes through 21 tunnels in addition to the 13 viaducts. There are also two spirals and two zigzags that allow the train to climb whilst avoiding steep gradients by going back and forth parallel to the slope of the mountain. A complete 270-mile round-trip, from the colonial city of Salta to San Antonio de los Cobres and back via the La Polvorilla viaduct takes around 15 hours.

The 10-car train that carries as many as 640 passengers averages just over 21 mph. The service departs twice weekly in the early morning and returns around midnight, carrying as many as 30,000m tourists annually.
9. Founded in 1989, Rovos Rail is a private train company that operates a very upmarket tourist service from Capital Park Station. The company's "train-hotel" runs a regular schedule in which country?

Capital Park Station is located in Pretoria in South Africa. The company runs regular services between Pretoria and Cape Town, Durban, Victoria Falls and Swakopmund on the west coast of Namibia. Another regular trip goes from Cape Town to the former capital of Tanzania, Dar es Salaam.

As well as golf safaris and other private charters, the company also puts on a special biannual trip that began in 2008 runs from Cape Town to Cairo in Egypt, utilizing private chartered aircraft and lake cruisers for parts of the journey. The company's train, "The Pride of Africa", is regularly named one of the "World's Top 25 Trains" by The Society of International Railway Travelers.

Its carriage are restored Rhodesia Railways stock, with each train consisting of two lounges, two restaurant cars plus varying sizes of private sleeping compartments, all of which have private ensuite facilities.
10. We finish with one of the world's most modern railways, the Shinkansen. This network extends some 1,500 miles with top speeds of up to 200 mph in which country?

The Shinkansen is a group of four rail companies that began operations in 1964 with 300 miles of track and now has almost 1,500 miles of track linking most major cities on the Japanese islands of Honshu and Kyushu. Although the maximum operating speed is 200 mph, test runs have reached 275 mph and a world record of 361 mph was set in 1996.
The world's busiest high-speed line, the network passed the 150 million passengers per year mark in 2008. As many as thirteen trains per hour (in each direction) run between Japan's two largest cities, Tokyo and Osaka, with each 16-car train providing capacity for 1,323 passengers. For safety reasons, the minimum time allowed between trains is just three minutes.
Source: Author EnglishJedi 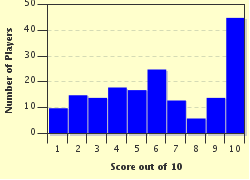