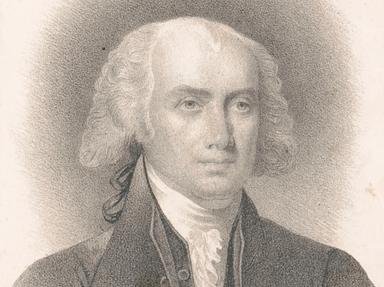 This quiz will cover some of the great moments of America's fourth president whose influence is still felt even today.

Quiz Answer Key and Fun Facts
1. James Madison played a significant role in the drafting of this important American document. He argued successfully for the creation of a strong central government. As a result of his input into the creation of this document he is often referred to the Father of this document. What important document am I referring to?

As a delegate to the Constitutional Convention in 1787, Madison maintained a detailed record of the proceedings and encouraged public opinion in favor of ratifying the Constitution. Since the convention was not covered by the press, Madison's detailed note-taking makes up the definitive record of the convention.
2. Prior to becoming president, Madison served as secretary of state from 1801 to 1809. During this time, Madison supported the purchase of the Louisiana Territory from France. What president appointed Madison as secretary of state?

As secretary of state, Madison strongly encouraged resistance to the demands by the Barbary pirates that the U.S. pay them tribute. He also strongly denounced the British practice of impressment.
3. Madison was elected to the United States House of Representatives where he served from 1789 to 1797. Madison was instrumental in the passage of the Bill of Rights, the first ten amendments to the Constitution. What state did Madison represent in the House?

During his time in the House, Madison showed himself to become one of president George Washington's leaders. However, as Washington came to support Alexander Hamilton, Madison become an advocate for Thomas Jefferson instead.
4. Madison remained single until the age of 43, when he married this widow on September 15, 1794 in what is now known as Jefferson County, West Virginia. Who did James Madison marry?

Dolley was born on May 29, 1768 in North Carolina. In 1790, Dolley married John Todd who passed away in 1793 during the yellow fever epidemic, leaving her a widow with one son, John Payne Todd. She passed away on July 12, 1849 and was buried in Washington, D.C.
5. During the presidential election of 1808, Madison's opponent was this Federalist from South Carolina. This man had previously run for president on the Federalist ticket against Thomas Jefferson in 1804 and lost. Name Madison's opponent in the 1808 presidential election.

After his defeat by Madison, Pinckney served as the first president of the Charleston Bible Society. He passed away in 1825. Robert Smith served as secretary of state under Madison while Paul Hamilton was Madison's secretary of the navy.
6. During his presidency, Madison asked Congress for a declaration of war on Great Britain due to British impressment of American ships and seizure of goods in international waters. Tell me the name of this war.

While serving as secretary of war, Monroe temporarily discharged duties of both state and war departments. William H. Crawford succeeded Monroe as secretary of war. Of course, Monroe would go on to become the fifth president of the United States.
8. During the presidential election of 1812, this man from New York was Madison's opponent. His uncle had previously served as vice president during president Jefferson's second term. Can you name Madison's opponent in the 1812 presidential election?

DeWitt Clinton was the nephew of George Clinton. During the election of 1812, Madison earned 128 electoral votes, while DeWitt Clinton garnered 89 electoral votes. Clinton won the majority of electoral votes in the following seven states: Connecticut, Delaware, Massachusetts, New Hampshire, New York, New Jersey and Rhode Island.
9. After his presidency, Madison remained active. During his retirement, he served on the board of regents at this university, and succeeded Thomas Jefferson as rector there in 1826. To what university am I referring?

In addition to his time at the University of Virginia, during his retirement Madison also represented Orange County at the Virginia Constitutional Convention in Richmond. In addition in 1819, he helped organize the American Colonization Society as a colony for former American slaves.
10. James Madison passed away on June 28, 1836, at his home in Virginia. He had been severely hampered by rheumatism and was confined to his room for the last six months of his life. What was the name of Madison's estate?

There are reports that Madison was offered stimulants to keep him alive until July 4 so he could join three former presidents who died on that date, but Madison refused. Dr. Robley Dunglison was the doctor who attended to Madison during the final month of his life.
Source: Author skevino

Related Quizzes
This quiz is part of series America's Presidents:

Some interesting questions about the men who have served in that all important position of President of the USA. I hope you enjoy!


Other Destinations
Explore Other Quizzes by skevino