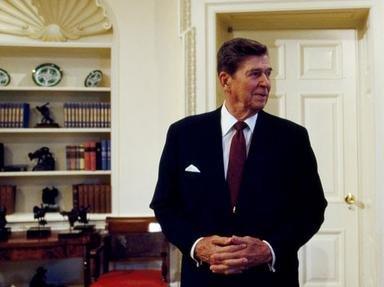 Ronald Reagan: He said THAT too? Quiz

My second quiz on Ronald Reagan quotes, from funny to silly to inspiring.

Quiz Answer Key and Fun Facts
1. Ronald Reagan said there was nothing better for the inside of a man than something. What?


Answer: The outside of a horse

An avid horseback rider, Reagan used his time on his California ranch to boost his spirits and his energies, and had a special affinity for world leaders who shared his interest. The "nothing better for the inside of a man than the outside of a horse" quote is a variation on a similar quote often attributed to Winston Churchill.
2. "How do you tell a Communist?" asked Reagan. "Well, it's someone who reads Marx and Lenin." According to the rest of the quote, how do you tell an anti-Communist?


Answer: "It's someone who understands Marx and Lenin"

As Reagan's relationship with Soviet leader Mikhail Gorbachev warmed up, he enjoyed telling jokes that "real Soviets" were supposedly telling. He started using this one in 1987, beginning with a speech to a meeting of Ukrainian Catholics in July.
3. How did Reagan respond when asked by ABC's Sam Donaldson if he thought Martin Luther King had been a Communist?

The question, during the 1983 drive to make King's birthday a US holiday, was prompted by concerns raised by some people about the onetime Communist ties of one of King's advisors, and by his increasing skepticism about capitalism in the later years of his life.

Reagan's response referred to the fact that many of the FBI's most sensitive files on King would not be open to public scrutiny until 2018. He went on to say that, "since they seem bent on making it a national holiday," he'd sign the legislation. Reagan made good on the promise, albeit "kicking and screaming," according to senator Fritz Hollings.

Perhaps his most famous speech, June 12, 1987, at the Brandenburg gate of the Berlin Wall:

The East German leadership opened the gate in November 1989, and Berliners demolished the wall with sledgehammers in a matter of hours. A large piece of the onetime Berlin Wall is exhibited outside Reagan's presidential library in California.
5. What, according to Ronald Reagan, was "the eleventh commandment?"


Answer: "Thou shall not speak ill of a fellow Republican"

Reagan's sunny disposition made it fairly easy for him to promote himself without deriding opponents within his own party. The reverence for Reagan among Republican politicians has since meant that they violate "the commandment" at their peril.
6. In his 1966 run for governor of California, what did Ronald Reagan say when asked what kind of governor he'd be?

Reagan's easy nonchalance, typified by that quote, so rattled Pat Brown, his incumbent opponent, that Brown actually showed a TV ad with him reminding a child that Lincoln had been shot by an actor. Reagan cruised to victory in the first governmental race of his life, serving two terms. Ironically, Brown's son Jerry was elected in 1974 as his successor.
7. In a 1983 speech to a business organization, what did Reagan say that angered many feminists?


Answer: "If it wasn't for women, us men would still be walking around in skin suits carrying clubs"

The speech was given in August 1983 to the National Federation of Business and Professional Women's Clubs convention, a largely Republican group. His comment to these accomplished and largely self-made women struck some as patronizing.
8. What prompted President Reagan in 1986 to tell 'Time' magazine's Hugh Sidey "There is bitter bile in my throat?"


Answer: The initial disclosures in the Iran-contra scandal

In the fall of 1986, American David Jacobson, held hostage in Lebanon for 17 months, was released, and signs were pointing to possible release of other hostages.

At the same time, accounts were beginning to appear that would ultimately show the connection between support for Nicaraguan contras and US arms trading in the Middle East, and Reagan deeply resented the undermining of the efforts, legal and otherwise, to free the hostages.

The breaking news eventually proved to be the worst scandal of his administration. No further American hostages were released from Lebanon until 1990.
9. "Doveryay, no proveryay," Reagan was fond of saying while dealing with Mikhail Gorbachev. What is the meaning of this old Russian proverb?

The basis for the relationship between the two countries, particularly on arms control, would be that they would trust each other, but maintain and strengthen that trust by verifying the compliance of each other. During the Gorbachev era, Reagan was so fond of the expression that he probably spoke these words more than many common English phrases.
10. When he met Sugar Ray Leonard, who had just unified the welterweight boxing title by beating Thomas "The Hitman" Hearns, what did Reagan say?

From a 1981 appearance by the boxer and his wife at the White House after the Hearns fight.
11. Reagan's first national exposure as a political figure came in a 1964 televised speech for Republican presidential candidate Barry Goldwater. Which line below is from that speech?


Answer: "We have come to a time for choosing"

The Goldwater speech is often referred to as the "time for choosing" speech because of that line. The full quote in context is "The Founding Fathers knew a government can't control the economy without controlling people. And they knew when a government sets out to do that, it must use force and coercion to achieve its purpose. So we have come to a time for choosing."

The other quotes come from his first inaugural address ("No arsenal"), from his accepting the 1984 Republican nomination ("people only as members"), and from his speech after the 1986 Challenger explosion ("The future doesn't belong").
12. President Reagan told reporters that he "learned a lot" during a 1982 trip to Latin America. What was one of those things he learned?


Answer: "You know, they're all individual countries"

Although the quote was widely used to ridicule him, he was talking about how, like Europe, individual Latin American countries each have their own unique priorities and interests:

"I think one of the greatest mistakes in the world that we've made has been in thinking, lumping -- thinking 'Latin America.' You don't talk that way about Europe. You recognize the difference between various countries. And the same thing is true here."
13. What figured prominently in one of Reagan's favorite stories to illustrate his own optimism?


Answer: A little boy and a pile of manure

In the story, a farm boy fervently hoped and expected to receive a pony as a gift. Running to the barn where he expected to find the pony, he saw nothing but piles and piles of manure. Undaunted, the boy happily started digging through the manure, until his father found him and asked what he was doing. "With all that manure," the boy answered, "there's got to be a pony in here someplace."
14. "Here's looking at you, kid," said Ronald Reagan in a toast to a prominent American on her birthday. Who was he toasting?

The 1987 party honoring Washington Post Company president Katharine Graham on her 70th birthday was one of the highlights of 1980s Washington society. Despite the animosity between the paper and the White House, Reagan delivered a warm and classy toast, capped off with Humphrey Bogart's well-remembered line from "Casablanca."
15. "I now begin the journey that will lead me into the sunset of my life. I know that for America there will always be a bright dawn ahead." From what are these words of Ronald Reagan?


Answer: His 1994 statement announcing that he had Alzheimer's Disease 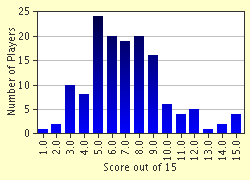