I was horrified to find that, apart from one on Emmeline Pankhurst, there were no quizzes on the suffragettes. There are so many other suffragettes and there is so much they did, and they deserve to have a quiz on them! Good luck!

No! Most of the more famous suffragettes were from privileged families, but others, like the quite well known Annie Kenney, were middle or working class and were just as devoted to the cause as the rich women.
2. Why is the suffragette Emily Wilding-Davison well known?


Answer: She was the first suffragette martyr

Emily Wilding-Davison felt that what the cause needed was a martyr. When she threw herself at the King's horse, she became that martyr. Unfortunately, the prime minister, Asquith, was unimpressed, and as a result women got even fewer rights. So poor Emily died to no avail!
3. What was Emily Wilding-Davison's most famous exploit - the one that killed her?


Answer: Throwing herself at the King's horse

Emily Wilding-Davison threw herself at the King's horse. This killed her. People today have heard of a woman doing this, but they probably wouldn't know her name. She also went on a hunger strike in prison and threw herself down an iron staircase- she only just survived that- but they aren't her famous exploits. She died during the Epsom races in 1913.
4. What were the names of Emmeline Pankhurst's daughters that helped her set up the suffragettes?

Christabel was Emmeline's eldest, born in 1880, and Sylvia was two years younger. They and their mother were very passionate about rights - not just women's rights, but rights for everyone. They had a younger sister, Adela, who also took a part in the suffragette societies before she relocated to Australia.
5. Who was the first woman to go on hunger strike?

Marjorie - known as Marion - was in prison and fasted for almost four days because she was put in a cell with rogues rather than treated as the political prisoner she was. Eventually, the prison authorities had to free her.
6. When all suffragette prisoners started to go on hunger strike, what did the authorities do to begin with?


Answer: They force-fed them

This didn't work, so in 1913 the government introduced the 'Cat and Mouse' Act. This allowed the government to release women hunger strikers from prison when they had grown weak and re-arrest them later. They did this so that they could not be blamed for the women's deaths. However, the women were too strong-willed to stop getting arrested!
7. Who formed the National Union of Women's Suffrage Societies?

This was a smaller, less militant suffragette society, formed by Millicent Fawcett in 1897.
8. When was the Women's Suffrage and Political Union formed?

It was formed when Millicent Fawcett's peaceful society failed to get anything done quickly, by Emmeline Pankhurst and her daughters Christabel and Sylvia.
9. When did women get the parliamentary vote in the UK?

They were a great asset to Britain during the war, and the new prime minister, David Lloyd George, was more flexible than the previous Asquith, who would not give them the vote, whatever they did!

(Various categories of women, such as property-owning widows, had been allowed to vote in some local elections since 1870).
10. What was the difference between suffragettes and suffragists?

Millicent Fawcett was the leader of the peaceful suffragists; Emmeline, Sylvia and Christabel Pankhurst were the leaders of the militant suffragettes. Many women believed that militance was needed to achieve their goal quickly, and got themselves into prison as soon as they got out of it! But they did achieve their goal in the end.
Source: Author eunomia 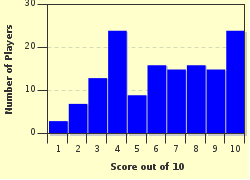 
Other Destinations
Explore Other Quizzes by eunomia