Ringing of "The Division Bell" Quiz

How much do you know about Pink Floyd's 1994 album?

Share on Facebook
Share on Twitter
Share by E-Mail
Author
manson_lover
Time
3 mins
Type
Multiple Choice
Quiz #
291,941
Updated
Jul 23 22
# Qns
10
Difficulty
Average
Avg Score
6 / 10
Plays
551
This quiz has 2 formats: you can play it as a or as shown below.
Scroll down to the bottom for the answer key.

Quiz Answer Key and Fun Facts
1. When was 'The Division Bell' released in the UK?

The album was released in the US on the 5 April 1994. The Division Bell was Pink Floyd's first Number one album in the US.
2. Who produced the album, along with David Gilmour?

Norman Smith was the producer of Pink Floyd's first and second albums 'Piper At The Gates Of Dawn' and 'Saucerful Of Secrets' and Glyn Johns produced The Who's album 'Who's Next'.
3. "Did you know it was all going to go so wrong for you?" is the first line from which song?

'Division Bell' was a Number one album both in the UK and the US. The first single from the album 'Take It Back' reached Number 23 in the UK charts.
4. "While the seeds of life and the seeds of change were planted" is from which song?


Answer: Coming Back To Life

The music and lyrics to 'Coming Back To Life' were solely written by David Gilmour.
5. "Do you want me to make a daisy chain for you?" is a lyric from which song?


Answer: What Do You Want From Me

'What Do You Want from Me' is a song about the lack of communication in a relationship, along with the songs 'A Great Day For Freedom' and 'Take It Back'.
6. 'Cluster One' has lyrics.

It is an instrumental written by David Gilmour and Richard Wright along with the track 'Marooned'.
7. "And all but the bitter residue slipped away" is the last line to which song?


Answer: A Great Day For Freedom

The title of the album was chosen by Douglas Adams (author of 'The Hitchhiker's Guide to the Galaxy'). The story goes that the three members couldn't agree on a name; some suggestions were 'Pow-wow' and 'Down To Earth', so Gilmour went to Adams (who is a good friend) for help. Adams said he had a suggestion but would only tell if Gilmour would donate Ł25,000 to the charity 'Save The Rhino'.

He agreed and the name was 'The Division Bell' taken from a line in the song 'High Hopes'.
8. "Can you see your days blighted by darkness" is from which song?

The artwork for the of the album was designed by Storm Thorgerson; the pair of three meter high metal sculptures on the front of the album were built by John Robertson. The sculptures were placed in a field in Cambrigeshire and photographed in all weathers and lighting for two weeks. The sculptures are now kept in the Rock n Roll Hall of Fame in Cleveland, Ohio.
9. "Our thoughts strayed constantly and without boundary" is a lyric to which song?

At the end of 'High Hopes', Gilmour's stepson Charlie can be heard hanging up on the band's manager, Steve O'Rouke, who pleaded to be allowed to feature on a Pink Floyd album.
10. "This bleeding heart's not beating much" is from which song?


Answer: Wearing The Inside Out

This song is sung by Richard Wright, his first lead vocal since 'Dark Side Of The Moon'.
Source: Author manson_lover 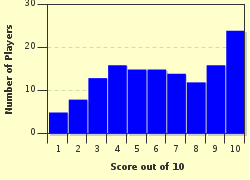 
Other Destinations
Explore Other Quizzes by manson_lover