One of the most iconic concept albums of all time, "The Wall" contains so many memorable tracks. How well do you remember the lyrics?

Quiz Answer Key and Fun Facts
1. From the opening track, "In the Flesh?": "So ya thought ya might like to go to the show To feel the warm thrill of confusion, that space cadet glow Tell me is something eluding you, _________?" What is the missing word?

The full stanza is:
"Tell me is something eluding you sunshine
Is this not what you expected to see
If you wanna find out what's behind these cold eyes
You'll just have to claw your way through this disguise"

The album opens with a truly memorable chord sequence to this song, which was originally to be called "The Show". The audience is introduced to the character of the rock star, Pink. The background sound effects of the dive bomber and then the baby crying subtly introduce the idea that Pink's father was killed in the war, leaving his mother alone to raise him.
Walters has said that the writing of "The Wall" was inspired by an incident when he spat at a fan trying to climb the fence separating the crowd from the band during the 1977 "In the Flesh?" tour, hence the eventual title of the opening track.
Track 21 on the album reprises the song, although now it is called "In the Flesh" (without the "?". This time, the same opening two lines are followed by:
"I've got some bad news for you, sunshine,
Pink isn't well, he stayed back at the hotel,
And they sent us along as a surrogate band,
And we're going to find out where you fans really stand."
2. After the first installment of "Another Brick in the Wall" comes "The Happiest Days of Our Lives". This is the concluding stanza of that track: "But in the town it was well known When they got home at night Their ________________ wives would thrash them Within inches of their lives" What are the missing words?

This track runs less than two minutes, with the first 25 seconds taken up by helicopter sound effects. This short track segues into "Another Brick in the Wall Part II", so it is often played as an extended intro to that track.

The track fills in the backstory of the embittered rock star Pink, tell of his experience at a school where strict teachers regularly treated pupils with contempt. The lyrics of this song are another of the autobiographical references from Roger Waters, reflecting his negative memories of school.
3. The final track on the first side of disc one is "Mother": "Hush now baby, baby don't you cry Mamma's going to check out all your girlfriends for you And mamma ____________________________ "? What are the missing words?


Answer: Won't Let Anyone Dirty Get Through

"Mother" is (IMHO) one of the really outstanding tracks on the album. The song lays out how Pink's adolescent sex life was controlled by his domineering mother, as she 'helps' him build the metaphorical wall in order to protect him from the outside world.
Roger and David share the lyrics on this track. Early on Gilmour (as the Mother) tells her son "Of course mother's gonna help build the wall", and the song concludes with Waters (as Pink) asking plaintively "Mother, did it need to be so high?"
Brilliant stuff!
4. The Blitz is remembered in "Goodbye Blue Sky": "D-d-did you see the _________ ones D-d-did you hear the _________ bombs D-d-did you ever wonder why we had to run for shelter when the promise Of a brave new world unfurled beneath the clear blue sky" What are the two missing words?

"Goodbye Blue Sky" opens the second side of Disc 1 on the album, but in the film it precedes "The Happiest Days of Our Lives".
Less than three minutes in length, the track begins starts by creating an impression of peace with a bird singing. Then comes the drone of the approaching bombers. "Look mummy, there's an airplane up in the sky" says a child.
During the 1990 "Live in Berlin" performances Joni Mitchell sang the lyrics for this song.
5. The rock star Pink is on the road, and enjoying the lifestyle in "Young Lust": "Will some _____ woman in this desert land Make me feel like a real man Take this rock 'n' roll refugee Oh, baby set me free"

Rich and famous now, Pink is on tour. Away from his mother and his wife, Pink seeks to relieve the boredom of the relentless trek from venue to venue via casual sex.
At the end of this blues/rock track we then Pink trying to call home from the U.S. -- "a collect call for Mrs. Floyd from Mr. Floyd". A man answers and keeps hanging up on the international operator, and thus Pink learns that his wife is cheating on him.
6. Pink's life spirals further and further out of control in "One of My Turns": "Run to the bedroom in the suitcase on the left You'll find my _________________ Don't look so frightened This is just a passing phase, one of my bad days" What are the missing words?

This is a song of three parts that begins with Pink inviting a star-struck groupie back to his hotel room. The groupie was played by Jenny Wright ("The World According to Garp") in the film, but on the album the part is voice by Toni Tennille of the 70s pop duo Captain & Tennille.
Ignoring the groupie, Pink muses on his failing marriage: "Day after day, love turns gray, like the skin of a dying man..." and expresses how he feels: "...cold as a razor blade, Tight as a tourniquet, Dry as a funeral drum". Then Pink suddenly explodes (as does the song), scaring the girl away and trashing the room.
The song ends with Pink descending into self-pity: "Why are you running away?"

Truly masterful song-writing from Roger Waters.
7. Bizarrely edited out of the film because someone thought it was getting too long, the second disc of the album begins with a truly great track, "Hey You": "Hey you, out there on your own Sitting _________________ Would you touch me" What are the missing words?


Answer: Naked by the Phone

Side two of the album (and the second half of the stage show) begins with the rock legend Pink behind the fully completed wall, cut off from the world and the society he has shunned. The fans still come to his concerts, but they don't really see him any more: "Standing in the aisles with itchy feet and fading smiles".
As the song goes on, Pink realizes that no one can hear him and that there is no escape: "But, it was only a fantasy. The wall was too high, as you can see. No matter how he tried, he could not break free. And the worms ate into his brain".
All I can say is "what were the filmmakers thinking". It truly is hard to believe that they chose to cut out one of the really iconic scenes and, for some fans, the best track on the album.
8. Pink's mental isolation behind the wall is summed up in "Nobody's Home": "I've got electric light, I've got _____________ Got amazing powers of observation And that is how I know when I try to get through On the telephone to you, there'll be nobody home" What are the missing words?

Sitting behind his mental wall, Pink is surrounded by all the possessions of stardom: "I've got the obligatory Hendrix perm, And the inevitable pinhole burns
All down the front of my favorite satin shirt..." What he doesn't have, though, is anyone to talk to.
"Nobody's Home" was the last song written for the album. In an interview 30 years on, David Gilmour picked this track as his favorite, commenting that it describes the state of mind of many touring rock stars.
9. I couldn't have a quiz about "The Wall" without including the iconic "Comfortably Numb": "There is no pain, you are receding A ____________________ on the horizon You are only coming through in waves Your lips move but I can't hear what you're sayin'" What are the missing words?

"Another Brick in the Wall" is probably the song that most casual watchers and listeners will know from "The Wall", but the favorite of many real Floyd fans and, certainly, of many guitar players, is surely "Comfortably Numb". Not only is this a fabulous rock song but it contains the greatest (okay, one of the greatest then) guitar solos ever written. Being one member of an 80,000-strong choir that sang along with "Comfortably Numb" at Wembley Stadium during the "Roger Waters - The Wall" tour of 2013 is something I'll always remember.
The last song on side one of Disc 2, this is where Pink's manager finds him unconscious in his trashed hotel room.
Roger sings the verses in the character of the doctor treating the adult Pink, whilst the chorus is sung by David, playing the part of the delirious Pink reverting to his childhood.
Just brilliant!
10. The album virtually ends with "The Trial", where Pink is accused of "showing feeling, showing feelings of almost human nature". He has a defence, though: "Crazy. Toys in the attic, I am crazy Truly _______________ They must have taken my marbles away" What are the missing words?

Pink's superstar life, filled with emotional turmoil and substance abuse, is judged. The witnesses against him are all those people who have driven him to the state in which he finds himself, the abusive schoolteacher, the dominant mother and the cheating wife.
Found guilty, Pink is sentenced to the worse possible fate: "Since, my friend, you have revealed your, deepest fear, I sentence you to be exposed before your peers... Tear down the wall!"
The packed courtroom erupts into chants of "Tear Down the Wall. Tear Down the Wall, etc.
Source: Author EnglishJedi 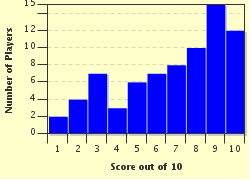