I Could Have Had a R8 Trivia Quiz

There are many types of fast cars including the Audi R8, but I decided instead to look at other types of transport which are slower paced and more unique. Come and take a look with me.

Quiz Answer Key and Fun Facts
1. The Asian tuk-tuk is a form of transport used as a taxi service to take as many as three passengers to their destination. How many wheels does it have?

Seen in Thai cities including Bangkok, these three-wheel vehicles are mainly used as an open air taxi service. Originally developed in Japan, the first tuk-tuk was seen on the streets of Thailand during the early 1960s, but called a Samlor by the local people: "sam" meaning three, and "lor" meaning wheel. Nowadays, the tuk-tuk uses modern fuels such as LPG to transport tourists to their destination, police through the narrow cobbled alleys, and also goods to various places in the city.
2. The Wuppertal Schwebebahn is a suspended monorail that can be found in which country?

Wuppertal in western Germany is a small city situated along the Wupper valley near to Dusseldorf. The Wuppertal Suspension Railway, or Wuppertal Schwebebahn, was first opened in 1901 to link together a group of industrial townships along the valley. Suspended from a fixed track, the monorail is 12 metres above the river and made from approximately 19,200 tonnes of steel, including the railway stations and supporting frames. It carries 82,000 passengers each day between its 20 stations along just over 13km of track.
3. Which form of transport, first introduced in the early 19th century, was the dandy-horse?

This contraption was very similar in style to the modern day bicycle except it did not have any pedals. Invented by German aristocrat Baron Drais von Sauerbronn in 1818, it had a wooden and wrought iron frame, saddle, handlebars and two wheels. The rider would sit on the saddle and propel himself along by pushing his feet against the ground. It was often a rocky ride as it had no suspension. The Baron called it Laufmaschine which meant "running machine" (not laugh machine!).
4. The Carmelit is a form of public transport in Haifa, Israel, which first opened in 1959. What is so unusual about it?


Answer: It is an underground funicular

Opened in 1959, this underground funicular goes partially up and down Mount Carmel in Haifa. The 1.8 km track transports approximately 8,000 people each day along an inclination and declination of 274 meters. The six stations link the financial district from places of entertainment, but the usage of the line has decreased in years because not many people live along its route. Locals prefer to take the overground bus service called Egged.
5. Used by people in America and parts of Europe, this sociable cycling machine can seat up to 12 people, including a hired driver who steers and uses the brakes, and a bar tender to serve alcoholic drinks. What is another name for the beer bike or pub crawler?

The appearance of the pedibus is like a mobile dining table on wheels. People sit around the outside of the table and a bar tender is in the middle serving drinks. A hired driver steers and brakes while the people who are drinking and partying have to cycle in unison by pumping their legs on the pedals hidden under the table top. The pedibus is a tourist attraction which can be hired hourly or daily, and can also be used to celebrate birthdays and other events.
6. What form of sea transport is the CMA CGM Marco Polo?

CMA CGM is a French company which transport containers around the world by sea. Each of their container ships is Explorer class and named after a famous explorer; Christophe Colomb, Amerigo Vespucci, Magellan, Corte Real, Laperouse and the Marco Polo. The Marco Polo launched her maiden voyage on 7 November 2012 and became the first of its kind, holding a massive capacity of 16,020 TEU (twenty-foot equivalent unit) containers.
7. What word is the name you would call disposable rubbish, as well a type of human powered transport which can carry a single person?

The litter was also known as a sedan chair or palanquin. A covered chair or bed would be lifted using poles which were carried by two or more servants or slaves, in front and behind the raised platform. Some litters were very ornate and covered by curtains as they carried Chinese emperors. Others were simply made by using two strong bamboos with a cane chair and umbrella. They were used throughout Asia, the Far East, Europe and the Americas.
8. Which American invented the two-wheeled Segway in 2001?

Dean Kamen is a businessman and inventor who had already worked with producing new inventions for the health industry. These included a drug infusion pump, portable dialysis machines and all terrain electric wheel chair called the iBOT. It was after introducing this that he came up with the idea of the Segway. The battery powered vehicle uses body weight to move the vehicle forward and increase speed, and backwards as a breaking system. The upright handlebar can be moved to position the Segway in a left or right direction.
9. Introduced in France during the early 1840s, the charabanc was the forerunner for which modern type of transport?

The name charabanc derived from the French word meaning "cart with benches". These horse drawn carriages had open tops and were used initially to take large groups hunting or to race meetings. They later became popular as a way of transporting company employees to their yearly trip to the seaside. Motorised buses slowly replaced the charabanc during the 1920s.
10. What types of transport were the Short Sunderland, Le Canard and the Bat Boat?

The sea plane, float plane or flying boat have been a feature of sea/air travel since tests were first carried out in 1905. French aviator and engineer Henri Fabre carried out the first independent flight in a float plane on March 28, 1910. He called her Le Canard, or The Duck. The Sopwith Bat Boat was a British design introduced in 1913, but its demise came two years later because of mechanical problems and the hull rotting. During World War II, the sea plane became very popular for carrying out coastline patrols and the flying boat bomber, Short Sunderland, was one of the most used.
Source: Author Plodd 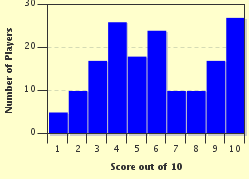 Related Quizzes
This quiz is part of series Commission #27:

You're not seeing double...but we're not making things any easier. For this Commission, launched in the Author's Lounge in March 2013, all participants received one or two titles, and each pair differed only slightly. Some wrote one, others wrote both.