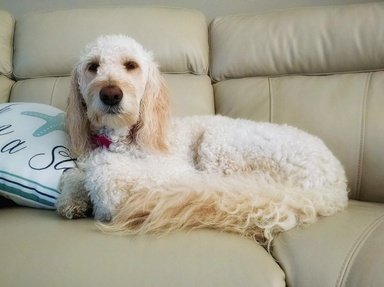 A Dog Quiz from a Cat Person

This quiz is about dogs. We, the cat people, love them, too! Have fun!
This is a renovated/adopted version of an old quiz by author LilSpikey

Quiz Answer Key and Fun Facts
1. Were dogs once worshipped as gods in Egypt, like cats?

The dog, like the cat, existed as a major or minor deity in many ancient civilizations. It was one of the earliest domesticated animals, as early as the late Paleolithic era, shortly after the domestication of goats and sheep. Dogs were worshipped worldwide, from Ancient Egypt to Mexico, Nepal and India. Anubis, the powerful Egyptian god of the underworld, is the most well-known among the dog gods.

The Egyptians had more dog deities, including Duamutef, the son of Horus, and Wepwawet, the brother of Anubis, who assisted the souls of the dead in the underworld.

In other civilizations, we see Cerberus, the three-headed guardian of the Greek underworld, Xolotl, the Aztec dog god of fire and lightning, and Bau, the Mesopotamian goddess of dogs.
2. What action do dogs do instead of sweating?

Even though dogs sweat through their paws and nose, they use panting to get their hot breath away from their body and inhale cooler air which, by coming in contact with the moist lining of the nose, mouth, throat and lungs, lowers body temperature. This method of cooling off when the temperature of the environment is high is not used solely by canines.

Other animals known to pant are birds and some species of reptiles.
3. Where did Dachshunds come from?

Dachshunds, meaning "badger dog" in German, are also called sausage dogs, wiener dogs, Doxie and Dashie. This hound breed was developed in Germany more than 600 years ago to hunt tunneling animals such as foxes, rabbits, and badgers with their short legs, muscular and long body and broad chest, characteristics that make it easy for them to dig holes and chase out the prey.

They are highly intelligent, brave, playful, and somewhat stubborn dogs that can be hunters, companions, watchdogs, and show dogs. Dachshunds are steadily among the ten most popular dog breeds worldwide.
4. In Greek mythology, what was the name of Odysseus' dog?

Homer narrates the story of Odysseus's dog Argos in the "Odyssey." After fighting in Troy for ten years and another ten years of wandering the Mediterranean Sea trying to reach Ithaca, Odysseus returns to his island. Disguised as a beggar and aided by his son Telemachus he approaches his palace where his wife Penelope has waited for him for these twenty years while avoiding the suitors that fight for her hand and the kingdom of Ithaca. Argos, very old, filthy, emaciated, covered with ticks and fleas, hasn't seen his master since he was a puppy and, yet, recognizes him immediately and wags his tail without being able to get up. Odysseus sheds a tear and continues toward the palace while Argos draws his last breath.

The scene, one of the most emotional among the rhapsodies of the "Odyssey," is described in Book 17, lines 290-327.
5. Where did the Chow Chows come from?

The Chow Chow is an ancient Chinese dog breed that originated in Northern China or Mongolia as far as 2000 years ago. It is a stocky, sturdily built dog with a characteristic ruff or mane that makes it look like a miniature lion. Other distinctive features are the blue-black tongue, double coat, and stiff walk.

It belongs to the spitz-type dogs, even though it is believed that it predates them. Chow Chows are described as having a cat-like personality because they are very clean, aloof and less eager to please, and more independent than most dog breeds.

They have been used for sled-pulling, hunting, and guarding livestock and were even bred for their meat.
6. How many muscles move a dog's ears?

A dog's ears contain about 18 muscles, which are used to uplift, lower, rotate, tilt, and move each ear independently. These movements of the ears help the dog to gather sounds and communicate with other animals or humans by expressing intention, mood and emotions.

The dog's external ear is comprised of the auricle and the ear canal. The auricular muscles control the movement of the auricle and are divided into four groups, the caudal, dorsal, rostral and ventral. The caudal group rotates the ear and moves it backward.

The dorsal group elevates the ear; the ventral group pushes the ear down, and the rostral group rotates the ear and moves it forward. Cats, on the other hand, are better equipped. They have 32 ear muscles, which allow them to perform even more movements to pinpoint the noise source and rotate their ears 180 degrees.
7. Dogs can be right-pawed or left-pawed.

Dogs can be lefties, righties, or ambilateral - using either paw, much like ambidextrous people. Researchers have developed various methods to estimate whether a dog is right-pawed or left-pawed. One of the most popular ones is the Kong Test. The dog is given a rubber tube called Kong, which he has to hold with its paw in order to access the treats hidden inside it.

The number of times the dog holds the tube with either paw or both paws are counted, and the dominant trait is measured. Another method to determine laterality is the First-stepping.

This method is not food motivated and has shown different results from the Kong Test. It counts the times each paw takes the first step from a standing position on a flat level. It needs to be replicated several times in order to reach reliable conclusions.

In this method, most dogs seem to show a right-paw preference.
8. What kind of dog breed was the first famous Rin Tin Tin dog?

American soldier Lee Duncan rescued a German Shepherd dog from a WWI battlefield and named him Rin Tin Tin, nicknamed "Rinty." He took him back to the USA with him and trained him to act in silent movies. Rin Tin Tin acted in 27 Hollywood movies and became a worldwide success.

His success contributed to the popularity of the German Shepherd breed, which remains among the top three most popular dogs to this day. After the original Rin Tin Tin died in 1932, more German Shepherd dogs assumed his role and name in the movies, among them some of Rin Tin Tin's offsprings and their descendants.
9. Basenjis cannot bark but they can do what?

The African Basenji is called the "barkless" dog. They are small, compact dogs, graceful, very clean and odorless, intelligent, and energetic. However, their most unique feature is that they don't produce a barking sound like most other dog breeds but communicate their feelings and moods with a sound that resembles a yodel, a chortle, or a howl. Most probably, the reason for this is the short depth of the Basenji's larynx, which makes it difficult for the vocal cords to vibrate properly and produce a bark.

The Basenjis are an ancient breed that originated in central Africa and only became known to Europeans in the Congo in the 19th century.
10. Which country did the Borzoi come from?

The tall, graceful, princely breed with the silky coat originated in Russia in the 16th century, and it was also called the Russian Wolfhound because it was used in hunting wolves. Its name means "fast" in ancient Russian, and it was bred from Persian, European and Russian hounds. Borzois are large dogs with a gentle personality which is overpowered by their hunting instincts when they come in contact with small animals, like cats, hare or squirrels.

In general, they are demanding in their maintenance and need to run, exercise and stretch out a lot.

They can be good companions to people who are active themselves.
Source: Author tiye

Related Quizzes
1. Dog Myths and Facts Average
2. Another Dose of Doggerel Average
3. Canine Conundrums for all Occasions Average
4. How Much Is That Puppy in the Window- Really? Difficult
5. What Breed of Dog Did They Have? Impossible
6. Dog Acronyms Tough
7. Love, Doggedly Tough
8. Dogs Allowed Tough
9. Dogs of Distinction Tough
10. Canine Capers Tough
11. Cropped, Docked or Natural in the USA Tough
12. It's a Dog's Life! Average


Other Destinations
Explore Other Quizzes by tiye