This remarkable dog, that traces its roots to Native Americans, Spanish conquistadors and French explorers in Louisiana, deserves its own quiz. Here it is!

Share on Facebook
Share on Twitter
Share by E-Mail
Author
naugros
Time
4 mins
Type
Multiple Choice
Quiz #
294,922
Updated
Dec 03 21
# Qns
10
Difficulty
Average
Avg Score
7 / 10
Plays
771
Awards
Top 35% Quiz
This quiz has 2 formats: you can play it as a or as shown below.
Scroll down to the bottom for the answer key.

Quiz Answer Key and Fun Facts
1. What other names is the Catahoula Leopard Dog known by?

The dog gets its name from Catahoula Parish and/or Catahoula Lake in Louisiana. This has been a chicken/egg argument and depends on who you ask if the lake is named after the parish (AKC.org) or the parish after the lake (wikipedia.org).

As you'll see below, it's more likely that the lake came first.
2. Not all of the alternate names for this breed include the word "leopard". The reason is that not all examples of the breed have the merle coat that gives it a "leopard-like" appearance. Which below best describes a merle coat?


Answer: A solid base color with lighter patches, creating a mottled effect

The patchwork coat has larger patches and is usually lighter-colored than a merle. It is comparable to the harlequin coat pattern seen in some Great Danes.
3. I have a Catahoula mix named Anastasia and almost everyone comments on her eyes. Ana's eyes are very typical of a Catahoula. What's so remarkable about them?


Answer: They are different colors

Ana has one brown eye and one ice blue eye. Her blue eye can be referred to as "cracked". Some curs have both eyes "cracked". A "cracked" eye is usually light-colored with a spot, streak or even a full half of the eye a different color.

The scientific term for this is heterochromia.
4. There are many theories as to the origins of the Catahoula. The most widely accepted one is that they are descendants from "war dogs" (thought to be greyhounds and mastiffs) brought to the New World. Which conquistador is thought to have left these "war dogs" behind?

The "war dogs" were found by the natives and it was thought they were bred with the red wolves of the region. Don Abney, an expert on the breed, forwards this theory in his book and on his website: www.abneycatahoulas.com.

However, recent DNA testing shows that it was more likely that the Catahoula descended from domesticated dogs that the Native Americans possessed rather than a wild species.

Despite the DNA evidence, many still prescribe to Abney's theory.
5. Catahoulas are used to hunt many species including mountain lions and bears, but that is not what they are best known for hunting. Many Catahoulas have been brought to Australia to help hunt what?

Another result of the failed de Soto expedition was the introduction of feral pigs into the South. De Soto travelled with swine that were his emergency meals on four legs. He would not slaughter them for food unless in dire need. Consequently, the herd grew into a large size.

When the expedition failed, the survivors could not bring back all that pork, so they slaughtered and cured what they could, gave many of the swine to the natives and released the remainder to the wild.

The area's "razorback" is a descendant of these animals.
6. Other than the "war dogs", it is thought that there was one more breed that was interbred with the dogs of the Native Americans to make the breed we know today as the Catahoula Cur. This occurred in the 1800s when the French settled into Louisiana. Which of their dogs is thought to have been the final ingredient in the Catahoula recipe?

The Beauceron looks like a leaner version of a Rottweiler without a docked tail. Like the Rottweiler, the Beauceron is a ferocious attack dog and a daunting guardian but, at home with its family, is a big mush that loves to play with the children.
7. What Native American tribe is thought to have played a large role in the development of the Catahoula?

The word Catahoula is a Francophone version of a Choctaw word, Couthaougoula, which is what they called their land. It translates to "sacred lake", thus answering the argument in Q1...hopefully.
8. Which president is known to have used Catahoula Leopard Dogs on many of his hunting expeditions?

There are two reasons you may not have chosen the correct answer.

1) You may have thought that Teddy was TOO obvious an answer since everyone knows he was a big hunter, or

2) You chose Andrew Jackson because you knew of his involvement in the Battle of New Orleans, which means he spent some time in Louisiana and may have come across these dogs.

Either way, I understand.
9. The Catahoula Leopard Dog is the state dog of Louisiana.

Governor Edwin Edwards signed a bill making the Catahoula Leopard Dog the state dog of Louisiana in 1979.
10. Although the Catahoula is not an AKC registered breed, it has been recorded in the Foundation Stock Service since 1996. If the Catahoula ever eventually is shown at Westminster, what group would the AKC have it compete in?

Although the Catahoula is often thought of as a hunter, it gets its prey by hemming it in for its masters. In effect, it herds wild animals. Many Catahoula trials focus on its herding abilities and it is even used in South America to herd cattle.

Oddly enough, its hunting tactics are not dissimilar to that of the Norwegian Elkhound, which is used to hold large prey, like moose and bear, at bay until the hunter arrives. However, the Norwegian Elkhound is placed in the Hound Group. Although the Catahoula is sometimes called a hound, its hunting style is not considered "hounding" and does not fit into that group. Some would argue that the same is true of Norwegians.
Source: Author naugros

This quiz was reviewed by FunTrivia editor crisw before going online.
Any errors found in FunTrivia content are routinely corrected through our feedback system.
Most Recent Scores
Dec 25 2022 : mandy2: 7/10
Dec 16 2022 : Andyboy2021: 10/10 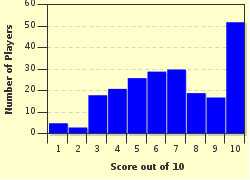 
Other Destinations
Explore Other Quizzes by naugros