Steven Berkoff has an extensive resume, in theatre, movies, and television. See how much you know about this prolific actor.

Share on Facebook
Share on Twitter
Share by E-Mail
Author
TonyTheDad
Time
5 mins
Type
Multiple Choice
Quiz #
288,701
Updated
Dec 03 21
# Qns
10
Difficulty
Tough
Avg Score
6 / 10
Plays
283
This quiz has 2 formats: you can play it as a or as shown below.
Scroll down to the bottom for the answer key.

Quiz Answer Key and Fun Facts
1. Steven Berkoff co-starred as a ruthless drug smuggler who used his ritzy art business to aid in his smuggling activities. What was the name of this comedy/action film of the 1980s?

This film, one of Eddie Murphy's first, blended the action and drama of a cop movie with Eddie's wild comedy. Steven Berkoff's chilling delivery makes his role as Victor Maitland, the art/drug dealer, a very memorable performance.
2. What World War II-era leader did Steven Berkoff portray in the mini-series "War and Remembrance"?

"War and Remembrance" was the most expensive mini-series ever at the time it was produced, with a price tag of over $100 million. Steven Berkoff is Jewish, and portrayed Adolf Hitler, whose "Final Solution" was to eradicate the Jewish people.
3. In which James Bond movie did Steven Berkoff portray a Russian general?

He played an arms merchant Hagath in the DS9 episode "Business as Usual" (aired 1997). He starts doing business with Quark, who uses his holosuite to demostrate the weapons for sale to their customers.
5. Berkoff appeared in "A Clockwork Orange" (1971), along with which actor who would play a future "Star Trek" villain?

Ricardo Montalban played Khan in the "Star Trek" episode "Space Seed" and in the movie "Star Trek II: The Wrath of Khan". Christopher Lloyd played Kruge in "Star Trek III: The Search for Spock". Rene Auberjonois played Col. West in "Star Trek VI: The Undiscovered Country".
6. Besides "A Clockwork Orange" (1971), which other Stanley Kubrick film did Berkoff have a role in?

"Barry Lyndon" starred Ryan O'Neal as the titular character. Berkoff portrays Lord Ludd.
7. Although Berkoff is quite accomplished in Shakespearean characters and plays in live theatre, he only had a part in one Shakespearean movie (named the same as the play) during the 1960s and 1970s. It is __________ .

This 1964 made-for-TV movie starred Christopher Plummer as Hamlet. It was the second production of "Hamlet" to be shot on location in Elsinore, Denmark, after a 1910 silent version. Berkoff portrayed Lucianus.
8. Berkoff wrote and performed in a TV-movie adaptation of this story written by American author Edgar Allan Poe.

This adaptation was presented on British TV in 1991 as part of the series "Without Walls".
9. Berkoff worked on movie or TV productions during the 1980s with all of the following actors, who've portrayed James Bond, except for _______ .

Berkoff played Sagan to Sean Connery's O'Niel in "Outland" (1981). He portrayed Karl Von Eiderfeld in the 1986 miniseries "Sins". This miniseries starred Timothy Dalton as Edmund Junot and Joan Collins as Helene Junot. He played General Orlov in "Octopussy" (1983), to Roger Moore's Bond. He also was a guest star in two episodes of "The Saint", the 1960s TV show starring ROger Moore.
10. Three of the following are Russian/Soviet characters that Berkoff has portrayed. The odd one out is ________ .

Capt. Tupolev (played by Stellan Skarsgĺrd) was the Soviet submarine captain that was ordered to search for and destroy Capt. Ramius (Sean Connery) and his submarine Red October in "The Hunt for Red October" (1990).

Igor Kurchatov was a character in "The Half Life of Timofey Berezin" (2006), about a disgruntled worker at a Russian nuclear facility. Gen. Orlov was from "Octopussy" (1983). Col. Ilya Kazak was part of a rogue KGB team out to kill Kate McQuean (played by Cindy Crawford) in the movie "Fair Game" (1995).
Source: Author TonyTheDad

This quiz was reviewed by FunTrivia editor gtho4 before going online.
Any errors found in FunTrivia content are routinely corrected through our feedback system.
Most Recent Scores
Nov 06 2022 : ClarkyB: 10/10
Oct 17 2022 : Guest 174: 5/10 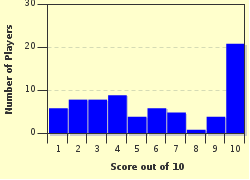 
Other Destinations
Explore Other Quizzes by TonyTheDad