Tallulah Bankhead's name is famous but how well do you know her life and career ?

Quiz Answer Key and Fun Facts
1. What was her first play in London?

The producer was Gerald Du Maurier.
2. Which great actress did she admire and mimicked at parties?

She became a life long friend of the three Barrymore siblings.
3. What was her first Noel Coward play?

The theme of the play (two women getting drunk and talking about an ex-lover) provoked the wrath of the moral leagues.
4. Huge groups of hysterical fans attended all her performances. What name was given to them?

One of them became her secretary and companion for the best part of her life.
5. Whom did she marry ... and divorce?

It was her only and short-lived marriage.
6. Who wrote "The Green Hat"?

It was rumoured that the novel was based on her affair with Lord Arlington. The author was part of the same crowd.
7. Who played her part in the film adaptation of "The Green Hat"?

The title was changed to "A Woman of Affairs" directed by Clarence Brown.
8. She was in George Cukor's "The Women"?

She did work with Cukor but on an earlier film called "Tarnished Lady".
9. Who was her leading man in "Faithless"?

Brook vas in "Tarnished Lady", Cooper in "The Devil and the Deep" and March in "My Sin".
10. Who played her part in the film adaptation of "Forsaking All Others"?

The movie starred Robert Montgomery and Clark Gable.
11. Bette Davis played in the film version of "The Little Foxes" but what other Bankhead role did she play on film?

Bankhead was to play "Jezebel" on stage but she had to pull out at the last moment and was replaced by Miriam Hopkins.
12. Who played her part in the film adaptation of "Clash by Night"?

Bankead never brought any of her stage parts to the screen.
13. What was the name of her radio program?

A one hour extravaganza that included the biggest names in show business at the time.
14. What film was she in with Ethel and Lionel Barrymore?

Lots of theatre stars had small roles in this movie.
15. When did she die? 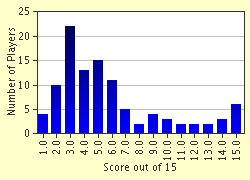 Related Quizzes
1. Tallulah Bankhead Tough
2. Who is Curtis Armstrong? Average
3. Walk to the Side of the Mountain Average
4. Black Magic Woman Average
5. Love the Attenboroughs Average
6. Comedy of Errors Easier
7. Warren Beatty : The Man and His Movies Average
8. The Film History of Ingmar Bergman Average
9. Bacall and Bogie Average
10. My Name Is Frances - Not Aunt Bee! Average
11. The Life and Times of David Boreanaz Average
12. The Jack Black Rap Easier


Other Destinations
Explore Other Quizzes by 4maxine