All Types of Numbers Trivia Quiz

Every question is from a different category. Each will use numbers, so good luck!

Quiz Answer Key and Fun Facts
1. History: How many legitimate grandchildren did Henry VIII of England have?

Isaac Newton went on to make some great discoveries in science and mathematics. He is well-known for his work with the laws of motion. The Julian calendar was still in use at the time of his birth - by modern count, his birthday would be Jan 4 of the next year.
3. Geography: How many countries border the Central African Republic?

Shells are used mainly for defense, although some shells increase other stats as well. The Ironclad Shell is found in Cavi Cape, but requires the spike ball to access. It is considered to be one of the best shells, along with the King Shell.
5. Animals: How many bones does a shark have?

A shark's skeleton is made of cartilage, not bones. There are many different species of shark, including the Great White, Hammerhead, and Angel sharks.
6. Sports: In which year were the Olympics first held in London?

This was the fourth Olympics. The first was in Athens, the second was in Paris, and the third was in St. Louis.
7. Music: How many lines are there on the stave?

With a treble clef, these are E, G, B, D, and F. They can be remembered as "Every Good Boy Deserves Fun". The spaces spell out "FACE".
8. For Children: How many thieves were in the story of Ali Baba?

Ali Baba was the character in the story "Ali Baba and the Forty Thieves". There was even a Bengali song called "Ali Baba" by Anjan Dutta.
9. Literature: According to the famous novel, how many leagues are under the sea?

"Twenty Thousand Leagues Under the Sea" is a book by Jules Verne. A league is an imperial unit of length, equivalent to three nautical miles.
10. Sci/Tech: What is the sum of the logarithmic (or geometric) average and the arithmetic average of 18 and 50? 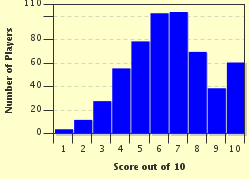 
Other Destinations
Explore Other Quizzes by BTD6_maker