A Matter Of Numbers Trivia Quiz

Numbers matter. There are the traditional 'Holy Numbers' in the Bible, theology, architecture, etc. There are the numbers in the system of measures and weights. This quiz is about a few basics.

Quiz Answer Key and Fun Facts
1. How many face cards (also called picture or court cards) are there in a pack of game-cards?

Four Kings, four Queens and four Jacks (or Knaves). Other numbers in games: 64 squares in a chessboard and 100 in a chequers board. Eight pawns per side, two rooks, two bishops, two knights, etc.

Originally face cards were called court cards. They were superior in rank to the numerals. In some games however some numerals (such as the ace and the ten) became superior to the court or face cards. Yet, this did not make them into face cards yet as by definition a face card has a representation of a human figure.

Jokers are not counted as face cards. Probably because originally they were not "court cards".
2. How many Wonders of the Ancient World were there?

The Seven Wonders: Pyramids Egypt; Hanging Gardens Babylon; Statue of Zeus at Olympia; Temple of Artemis at Ephesus; Mausoleum of Halicarnassus; Colossus of Rhodes; Lighthouse of Alexandria.
3. According to the Bible, how many Commandments did Moses bring back from Mt Sinai?

In St. Augustine's view there was only ONE basic commandment: 'Ama et fac quod vis', which can be understood as :"If you are inspired by the Love of God, you will act right". Rabelais took this principle over for his Abbey of Theleme. The hippies made their own interpretation of this view. The May 1968 movement in France even turned it into a very unholy slogan.
4. For how many days did it rain at the times of the Great Flood?

Also Lent has 40 days.
5. Which of these 'holy sevens' is an incorrect one?

Note: Pluto lost its status as a planet in 2006. (National Geographic Website, 2006).
6. Which of these sevens is the only correct one?

They are the daughters of Zeus and Mnemosyne. Twelve inches in a foot (and three feet in a yard). Four quarts in a gallon, which makes eight pints (but sixteen ounces in a pound).
7. In what fairy-tale do these seven occur: Doc, Happy, Grumpy, Sneezy, Bashful, Sleepy and Dopey?

These are the names of Snow White's dwarfs in the Disney version of the story. The Smurfs are a creation of Peyo. The Wild Swans are by H.C. Andersen. The Wolf and the Seven Little Goats and Snow white belong to the fairy-tales collected by the Brothers Grimm.
8. Of what famous group of three + one are these the names: Porthos, Aramis and Athos? The Three _________

The fourth one is of course d'Artagnan.
9. How many 'world seas' are there, according to a centuries-old standing expression?

The expression the "seven seas" is a figure of speech dating back to the Romans ("septem maria"). It has been used to refer to different bodies of water at various times and places. The original "seven seas" seem to have been the Indian Ocean, Black Sea, Caspian Sea, Adriatic Sea, Persian Gulf, Mediterranean Sea and the Red Sea. Today we recognize more than 50 seas worldwide.

A sea is defined as a division of the ocean which is enclosed or partially enclosed by land. The Caspian Sea, Dead Sea and Aral Sea are only "seas" in name. Technically speaking they are "saltwater lakes". On the other hand the Gulf of Mexico and the Hudson Bay do not get the name "sea" though, again technically speaking, they are seas. Linguistically the stock-phrase is "the seven seas".
10. What is a popular nickname for the clubhouse at a golf course?

Seventh Day was the day of rest indeed. The Seventh Heaven is for VIPS in the Hereafter. The Eleventh Commandment has been used as a name for restaurants,pubs etc. and probably comes down to: DO not forget to relax from the other ten, time and again. The Nineteenth Hole is of course for relaxing too.
Source: Author flem-ish 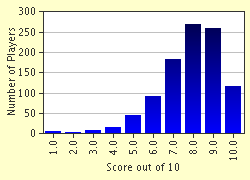