Playing by the Numbers: Part I Quiz

Can you identify the person, novel, movie, song or location which corresponds to the numbers given?

No. 10 Downing Street, London SW1A 2AA, England has been the headquarters of Her Majesty's Government for over 300 years and contains over 100 rooms.
2. Nineteen Eighty-Four

This novel which was published in 1949 is by the English author George Orwell. The novel is also known as "1984". The story is about a fictional country that is run by a corrupt government through public surveillance and manipulation.
3. Twelve O'Clock High

"Twelve O'Clock High" (1949) is an American war drama depicting the lives of the crews of the US Army's Eighth Air Force who fly bombing missions over Germany and occupied France. The movie stars Gregory Peck and received four Academy Award nominations.
4. Hundred

Hundred is the name of a town in West Virginia which was founded by Henry Church. When Henry died in 1860 aged 109 he was simply known as "Old Hundred".
Therefore the town was named after him. There are a total of eight towns in the USA whose names are numbers, some of which are: Eighty-Eight, Kentucky, Seventy-Six, Kentucky, Eighty Four, Pennsylvania and Sixes, Oregon.
5. The Three Stooges

The Three Stooges were an American vaudeville comedy act during the early 20th Century. They made short films and their trademark was physical farce and slapstick comedy. Moe and Larry stayed with the act from 1930-1969 with Curly, Shemp, Joe and Curly Joe making up the trio over the years. In all, The Three Stooges appeared in over 220 films.
6. 1600

The official address of the White House is 1600 Pennsylvania Ave NW, Washington DC 20500, United States. It has been the official residence of the President of the United States of America since John Adams in 1800.
7. 9 to 5

The song "9 to 5" was written and performed by Dolly Parton in the 1980 comedy movie of the same name. The song reached number one on the US Billboard Hot 100, the Billboard Hot Country Singles and the RPM Country Tracks.
8. Stalag 17

"Stalag 17" is an American war movie depicting US airmen held prisoner in a German POW camp. William Holden won the Academy award for Best Actor for his role as J.J. Sefton. Both Charlton Heston and Kirk Douglas were considered for the role of J.J.Sefton, however, a reluctant William Holden took the part.
9. Catch 22

Joseph Heller (1923-1999) was an American novelist, playwright and short story teller. He is best known for his satirical novel "Catch 22". Heller started the novel in 1953 and it was finally published in 1961. The story follows the lives of US Army pilots during WWII. Based on the novel, the phrase "Catch 22" has become part of the English language referring to an unsolvable circumstance where one can receive two or more conflicting messages or solutions that contradict each other.
10. 50 Cent

Curtis James Jackson III is an American rapper, actor and businessman who is professionally known as 50 Cent. He began selling drugs as a youngster and was shot a number of times in a 2000 shooting incident. As a musician he has sold over 30 million albums world wide and has won many awards, including a Grammy award.
Source: Author zambesi 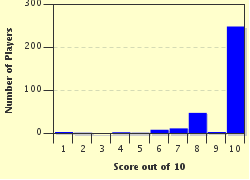 Related Quizzes
1. A Matter Of Numbers Average
2. A New Year's Countdown Average
3. All Types of Numbers Average
4. Another Numbers Game Average
5. As Easy As Pi Average
6. Can I Get Your Number? Difficult
7. Counting Up To Twenty Very Easy
8. Double Happiness Very Easy
9. Ever Wonder about the Number Average
10. How Long Is a Piece of String? Average
11. I've Got Your Number Average
12. It Adds Up Difficult