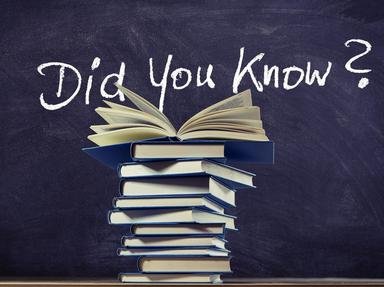 Have another go at the spectrum of FunTrivia categories! Twenty questions of random fun!

Quiz Answer Key and Fun Facts
1. ANIMALS: Which of the following pigeon species became extinct in the early 20th century?

The Passenger pigeon, or Ectopistes migratorius, was a species of pigeon native to North America at the time of the arrival of the Europeans in the 15th century. Reports of the huge flocks of Passenger pigeons give experts cause to believe that the species numbered between 3-5 billion birds at the time.

The bird species went from being one of the most abundant (still in the 19th century) to extinction in the early 20th century. A number of factors contributed to their rapid decline, chief among them believed to be when pigeon meat was commercialized for the feeding of slaves and the poor, triggering hunting on a massive scale.
2. BRAIN TEASERS: Mary's father has four children; three are named Nana, Nene, and Nini. So what is the fourth child's name?

Congratulations if you got this one right! If not, reread the question carefully: MARY's father has four children... which means that the four children are named Nana, Nene, Nini and Mary... and NOT Nono like you thought.
3. CELEBRITIES: Which of these comedians hosted the most Academy Awards ceremonies in the 20th century?

Bob Hope (1903-2003) hosted the Oscars a grand total of 18 times during his lifetime, with his last time being for the 50th Academy Awards in 1978. Billy Crystal hosted the second highest number of times (up until the year 2000) with seven appearances. Johnny Carson had the job five times and Whoopi Goldberg three (up to the 72nd Oscars in 2000).
4. ENTERTAINMENT: A number of superheroes have been able to count themselves among the Avengers of the Marvel Universe. Which of these has never been a member?

Superman, of course, has never been a member of Marvel Comics' Avengers. Superman lives within the DC Comics universe, and while there have been crossover stories written, Superman has never been a member of the Avengers. The group affiliation that Superman had with DC Comics was the Justice League of America.
5. FOR CHILDREN: What popular Disney movie series, starring Johnny Depp, was adopted by LEGO as a theme for new construction sets and video games in 2011?


Answer: Pirates of the Caribbean

Released at approximately the same time in May 2011, "LEGO: Pirates of the Caribbean" continued the successful run of movie-related releases by the company already accomplished through "Star Wars", "Indiana Jones" and the "Harry Potter" movies.
6. GENERAL KNOWLEDGE: Secondary colors are made by the mixing of two primary colors. Based on 'Traditional Colour Theory', which of the following is NOT a secondary color?

The three 'traditional' primary colours are red, yellow and blue. Red and yellow mix to make orange, red and blue make purple, and blue and yellow make green. Since the 17th century, the traditional colour theory had the RYB model, using red, yellow and blue as the primary colours. Since that time, criticism of that system has allowed for the more scientifically-based 'CMYK' model, utilizing cyan, magenta, yellow, and 'key' (black) as primary colours.
7. GEOGRAPHY: The geographical center of North America is marked with a monument within which U.S. state?

A stone cairn marks the geographical center of North America in Rugby, North Dakota. The coordinates marked on the monument read N48° 21' 15.8" W99° 59' 53.1". This spot was determined by the U.S. Geographical Survey of 1931, and the cairn was built in 1932 by the local Boy Scouts and other volunteers.
8. HISTORY: Alaska and Hawaii were both admitted to the Union in 1959; the 49th and 50th states to do so. Did that happen before or after Newfoundland joined Confederation as the last (10th) Canadian province?

Alaska's entry into the Union occurred on January 3rd, 1959, while Hawaii came in later in the year on August 21st. Newfoundland's entry into Canadian Confederation happened ten years prior to that, on March 31st, 1949. The province's name was officially changed to Newfoundland and Labrador in 2001.
9. HOBBIES: An artisan who forms stone, minerals or gemstones... the word means 'concerned with stone.' What word?

Also referred to as a lapidary, the term is Latin in origin; lapidarius (of stone). A philatelist collects stamps, a numismatist collects coins and currency, and a philhellene is one who is enamored of Greek culture.
10. HUMANITIES: In Greek mythology, the Moirae (or Fates) spun, measured and cut each person's thread of life. Which of these was NOT one of the Moirae?

Clotho was the spinner of the thread of life, Lachesis was the one who measured the span of each person's life, and Atropos chose the manner of a person's death, and when it was their time, would cut the thread with her shears.

Demeter was the goddess of the harvest, the fertility of the earth, and the seasons.
11. LITERATURE: Which of these books is not part of Douglas Adams' series "The Hitchhiker's Guide to the Galaxy"?


Answer: The Long Dark Tea-Time of the Soul

"The Long Dark Tea-Time of the Soul" was one of two books featuring the character of detective Dirk Gently, the other book appropriately being titled, "Dirk Gently's Holistic Detective Agency". That book was described by Douglas Adams as being "a kind of ghost-horror-detective-time-travel-romantic-comedy-epic, mainly concerned with mud, music and quantum mechanics."

"The Hitchhiker's Guide to the Galaxy" began as a BBC radio serial in 1978, and the five books (by Douglas Adams) in the series were all written between 1979 and 1992, along with a sixth book written after Adams' death by Eoin Colfer.

The two books not named yet within this question are "Mostly Harmless" and the posthumously written "And Another Thing..."
12. MOVIES: What actor, of "Doctor Who" fame, played the role of Barty Crouch, Jr. in "Harry Potter and the Goblet of Fire"?

Tennant's role as the evil Barty Crouch, Jr. was the polar opposite of the exuberant yet mysterious Doctor, which he played for four years from 2006 until 2009. "Harry Potter and the Goblet of Fire" was released in 2005.

David Tennant was born in Scotland as David John McDonald in 1971. In my opinion, he did a terrific job hiding his Scottish accent in his role as the doctor, since I had no idea of his Scottish heritage until hearing him in an interview.
13. MUSIC: Many woodwind instruments use a reed to produce their sound. Which of these instruments does not use a reed?

The piccolo, along with the flute, is played by blowing a focused stream of air across a hole, in the same way that one would make a sound blowing across a bottle-top. The clarinet and saxophone families all use single reeds attached to plastic or metal mouthpieces, while the oboe (and bassoon and English horn) use double reeds, where a single reed is folded in half, clipped at the end, and shaped until the two halves (tied together) can be blown through into the instrument.
14. PEOPLE: This politician was the premier of Manitoba from 1999 until his appointment as Canada's ambassador to the United States in 2009. What is his name?

Gary Doer joined Manitoba's New Democratic Party in the 1970s, eventually winning a seat in the 1986 election in the riding of Concordia in Winnipeg. Doer took over the leadership of the NDP in 1988, but did not become premier of Manitoba until his party won the 1999 election. He was Manitoba's 20th premier.
15. RELIGION: Of Jesus' 12 disciples, which two were the 'sons of Zebedee'?

Mark 1:19,20 KJV - "19 And when he had gone a little farther thence, he saw James the son of Zebedee, and John his brother, who also were in the ship mending their nets. 20 And straightway he called them: and they left their father Zebedee in the ship with the hired servants, and went after him."
16. SCI/TECH: What's that gizmo called? You know... the "device for measuring or maintaining orientation, based on the principles of conservation of angular momentum".

The earliest known gyroscope was developed by Johann Gottlieb Friedrich von Bohnenberger (1765-1831), which he first wrote about in 1817, referring to it as 'the machine'. It was further developed and refined by Walter R. Johnson and Pierre-Simon Laplace before it came to the attention of Léon Foucault, who first called it a gyroscope and used it to see Earth's rotation.

Quotation taken from the Wikipedia page on gyroscopes.
17. SPORTS: The National Hockey League has one jersey number that has been retired league-wide. What 'Great One' wore number 99?

Wayne Gretzky first wore the number 99 with the Sault Ste. Marie Greyhounds of the Ontario Hockey League at the age of 16. He wanted to wear the number 9 - the number worn by Gordie Howe - but another player already was wearing it, so he claimed number 99.

Gretzky retired (appropriately) in 1999 with 61 NHL records either held alone or shared.
18. TELEVISION: Jeff Probst has been the host of which long-running American reality TV series?

"Survivor" first aired in the year 2000 ("Survivor: Borneo"), with Richard Hatch being the first winner of the "Survivor" franchise. Other editions of the show have ranged the globe for locations, always in tropical regions that provide opportunities for the contestants to be scantily clad.
19. VIDEO GAMES: Who first appeared in 1983 as the second controller character in the arcade "Mario Bros." game?

Luigi is Mario's slightly younger fraternal twin brother. Luigi's first opportunity to have a solo adventure was "Mario is Missing", released in 1992. The game was made for PC and SNES and had Luigi having to rescue Mario, who had been captured and imprisoned by Bowser in Antarctica.
20. WORLD: It is called Pascua in Spanish, Pasen in Dutch, Wielkanoc in Polish, and Ostern in German. What Christian holiday is it in English?

Easter celebrates the resurrection of Jesus Christ after his death on the cross (Good Friday). It is the central Christian holiday, celebrating the foundation of the entire faith - without Christ's resurrection, Christianity would not exist.
Source: Author reedy 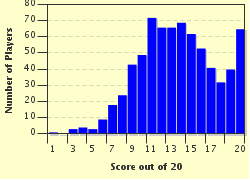 Related Quizzes
This quiz is part of series Generally Speaking:

Have a go at a few General quiz series that I have created.