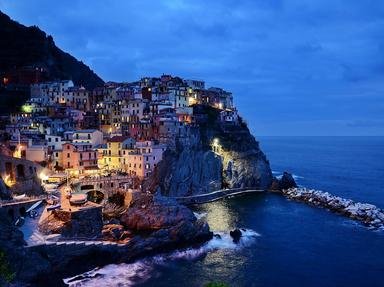 Northern Italy has a lot to offer, and this quiz looks at ten different facets of the Lombardy Region from its people to its places to its food, fashion, and facets. Good luck!

Share on Facebook
Share on Twitter
Share by E-Mail
Author
kyleisalive
Time
4 mins
Type
Multiple Choice
Quiz #
395,731
Updated
Dec 03 21
# Qns
10
Difficulty
Average
Avg Score
7 / 10
Plays
139
Awards
Top 20% Quiz
This quiz has 2 formats: you can play it as a or as shown below.
Scroll down to the bottom for the answer key.

Quiz Answer Key and Fun Facts
1. One of Italy's many famous cultural landmarks, Teatro Alla Scala can be found in Milan. It's used for which of these?

La Scala opened in 1778 and has since hosted opera premieres by Salieri, Rossini, and Verdi. Built on the grounds of the Santa Maria alla Scala church (which was demolished to make room for the theatre), La Scala was built near the center of Milan in its old downtown area.

A short walk across the way from the Duomo and across the plaza from city hall (Palazzo Marino), it's one of the many landmarks at the city's cultural core. La Scala was bombed during the Second World War, but three years of repairs led to a reopening led by famed conductor Arturo Toscanini, who earlier led the New York Philharmonic, and who was born just south of the Region of Lombardy (in Parma).
2. What Lombard city was the birthplace of philosopher Pliny the Elder, who died during the eruption of Mount Vesuvius?

Although Pliny the Elder died during the eruption of Vesuvius that wiped out Pompeii and Herculaneum in 79AD, he was succeeded by Pliny the Younger, his son, who wrote of the eruption many years later and later acted on the Roman Senate. Pliny the Elder is perhaps best known for writing "Naturalis Historia". Como is also the birthplace of scientists, former popes, and poets.

In modern days, it's become an upscale tourist destination known for its pristine lake at the base of the Pre-Alps. It's beautiful enough that it's also contained a number of celebrity homes, notably those of George Clooney, Madonna, and Gianni Versace.
3. The Lepontine and Rhaetian Alps of Lombardy are part of the Western Limestone Alps, part of a chain that stretches into what adjacent stretch of mountains, also a protected area of Northern Italy?

The Dolomites are part of three other regions in the northeast of Italy-- Belluno, South Tyrol and Trentino-- and are not found in Lombardy, but there are several other Pre-Alp regions found all along the northern border of the country, notably near Bergamo, Como, and Brescia.

The four-kilometre-tall Piz Bernina can be found on the Swiss-Italian border in the Rhaetian Alps and while formally accessed from the Swiss Olympic city St. Moritz, it lends its name to Bernina Pass which connects said city with the town of Tirano.
4. Which metal band, known for its male and female lead vocals, hails from the city of Milan, Italy?

Formed in the 1990s, Lacuna Coil has become one of the most popular names in the goth metal subgenre, becoming the face of heavy-sound bands to feature both a male and female vocalist. For several decades, these were roles filled by Andrea Ferro and Cristina Scabbia, both from Northern Italy (with Scabbia being from Milan).

The band's albums never started hitting the major charts (internationally) until the mid-to-late 2000s with "Karmacode". The song "Our Truth", from said album, hit number one on the UK Rock Chart.
5. Milan's Galleria Vittorio Emanuele II is named after which of the following?


Answer: A king of Italy

Constructed by Giuseppe Mengoni (who died falling off the galleria's roof), Galleria Vittorio Emanuele II is one of the many elaborate structures of Central Milan and it connects Piazza della Scala to the Duomo on the opposite side, creating a lengthy shopping centre in its arcade.

It's said that if you head to the center of the Galleria, stand with your heel in the groin of the bull depicted on the floor, and spin backwards three times, you'll be bestowed with good luck. Vittorio Emanuele II was King of Italy in the 19th century, proceeding Napoleon.
6. One of Lombardy's most-visited destinations, which of these has a UNESCO-protected, fortified upper city?

Sitting at the base of the Bergamo Alps, the city of Bergamo is a beautiful destination known for its city walls built to protect the citadel of the city in the 16th century. This, of course, also includes the distinctive Santa Maria Maggiore, built over four centuries during medieval times. Bergamo was at one time, a seat for northern Italian dukes, but it has since grown to be one of the most important hubs of Lombardy for both its cultural significance and its industry.

It's second only to Milan in terms of tourists in the way of cities in the region.
7. Campione d'Italia is an exclave of Lombardy which is completely surrounded by which of these adjacent nations?

Campione d'Italia is completely surrounded by Ticino, one of the southernmost regions of Switzerland, and if you stand on Monte San Salvatore in Lugano, Switzerland, you can look down at the Swiss border, across Lake Lugano to Campione d'Italia, and further over the mountains to where Italy actually begins.

The reason for this is that Campione d'Italia is only accessible by a lengthy road that cuts through Switzerland, so while you could hike to Campione d'Italia from Italy in under half an hour, a drive would probably take fifteen minutes; the road is twenty times longer.
8. Of these Milan-headquartered fashion houses, which one was established the earliest?

Prada has them all beat by decades! Starting in 1913, Prada was founded by Milanese fashion designer Mario Prada; it's known for its leather handbags amongst other high fashion items. It shares the scene with several other designer brands since Milan is considered one of the fashion capitals of the world and is home to one of the most expensive boutique streets on the planet. Armani was introduced in 1975, Versace in 1978, and Dolce & Gabbana in 1985. All of them have grown to be multi-billion dollar companies known the world over for their luxury.
9. Which of these artworks is found in the Convent of Santa Maria delle Grazie in Milan, Italy?

While all of these works of art are Italian-made, only three are permanently housed in Italy, and two of those are frescos, paintings done on wet plaster. "The Last Supper", painted by da Vinci, is in a refractory building next to the otherwise unassuming Santa Maria delle Grazie. Painted with tempera in the late 15th century, the fresco has been worn down by the years and is probably best-seen in its countless recreations. "The Creation of Adam" is on the ceiling of the Sistine Chapel in Vatican City, the Statue of David is in Florence, and the "Mona Lisa" is in the Louvre in Paris.
10. The Milano cookie is named after Milan, Italy, where it was first created.

Created by the U.S. cookie makers at Pepperidge Farm, the Milano was made to reflect a European style in a line of cookies first released to stores in the 1950s. Perhaps most popular in North America (and packaged as 'Monaco' cookies in Canada for many years), the Milano consists of two biscuits with chocolate filling in between. Variations of the Milano containing chocolate-fruit fillings and mint chocolate have also been common in grocery stores.

They did not originate in Milan whatsoever.
Source: Author kyleisalive

This quiz was reviewed by FunTrivia editor trident before going online.
Any errors found in FunTrivia content are routinely corrected through our feedback system.
Most Recent Scores
Jan 26 2023 : Guest 86: 6/10
Jan 14 2023 : mjgrimsey: 2/10