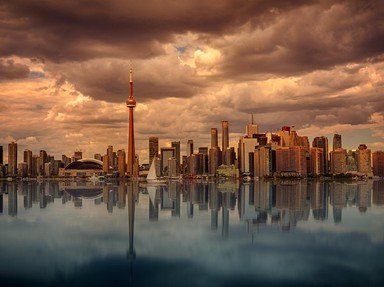 This vast and beautiful country has much to offer. Can you correctly identify all these places within it, both real and fictional?

Avonlea is a fictional place where Lucy Maud Montgomery's "Anne of Green Gables" book series was set. It is described as being located on the Canadian province of Prince Edward Island. When Prince William of the British royal family visited Canada in 2011 with his wife Catherine, she especially requested for a trip to the province as the "Anne of Green Gables" series had been a childhood favourite.
2. "Honeymoon Capital of the World"

Niagara Falls is the name given to a group of three separate waterfalls found along the US-Canada border, namely the American Falls, Bridal Veil Falls and the Horseshoe Falls with the latter being the largest of the three. The falls lie within the US state of New York and the Canadian province of Ontario. A popular tourist site, the first couple to reportedly visit during their honeymoon were the daughter of the US Vice President Aaron Burr and her husband in 1801. The site was then promoted as a honeymoon destination by the New York Central Railroad after the American Civil War. Its popularity also received a boost when the Marilyn Monroe starrer "Niagara" was filmed there in the 1950s.

In my view, the falls are best viewed and enjoyed from the Canadian side and are definitely a must visit for anyone travelling to the region.
3. Early Viking settlement

L'Anse aux Meadows is a UNESCO designated World Heritage Site. It is located on the northern tip of the island of Newfoundland and is regarded as one of the earliest Norse settlements in North America pre-dating Columbus' better known exploration of the continent by almost 500 years.

This important archaeological discovery was made by a Norwegian couple - Helge Ingstad and Anne Stine Ingstad, in 1960.
4. Venue of the 2010 Winter Olympics

Vancouver is another large Canadian city and is located along the Pacific coast. It was chosen as the host for the 2010 Winter Olympics which are also informally referred to as Vancouver 2010. This was the second time that Canada hosted the Winter Olympics after the 1988 games were held in Calgary.
5. Site of the world's highest tides

The Bay of Fundy is found in the eastern part of Canada along the Atlantic Coast. It is located between the provinces of Nova Scotia and New Brunswick. It is considered to be the site of among the highest tides in the world. There are a number of small coastal communities and also areas protected as national and provincial parks along the bay.
6. Home of the Ogopogo monster

Lake Okanagan is located in British Columbia. Ogopogo is a mythical monster believed to live within the lake and is depicted in the form of a water serpent. The legend of Ogopogo is considered to have originated among the First Nations people who lived within the region. Some theories state that they referred to a water deity or spirit and not an actual creature.
7. "Polar Bear Capital of the World"

Churchill is located in the northern part of the province of Manitoba along the shores of the Hudson Bay. The place's claim to fame is the large number of polar bears that move inland from the bay in the autumn season. It is one of the few places with a large human settlement where polar bears can be observed in the wild.

This feature is a top draw for many tourists earning it the nickname of the "Polar Bear Capital of the World".
8. Venue of Expo 67

Montreal is located in the province of Quebec and is one of the largest cities of Canada. It was originally named Ville-Marie which in French means 'City of Mary' after the Virgin Mary, mother of Jesus. Expo 67 was a World's Fair held in 1967 in Montreal and generally considered one of the most successful of such events in the 20th century. Later, Montreal also hosted the Summer Olympic games in 1976.
9. Sinking of the SS Edmund Fitzgerald

The SS Edmund Fitzgerald was a large freighter transporting iron ore in the Great Lakes region. On the 10th of November, 1975, it was caught in a storm in Lake Superior and sank with all the 29 people on board the ship losing their lives. The exact cause of the sinking has not yet been determined.

This incident inspired the song "The Wreck of the Edmund Fitzgerald" by the Canadian singer Gordon Lightfoot.
10. Annual rodeo event - "The Greatest Outdoor Show on Earth"

Calgary is in Canadian province of Alberta. The Calgary Stampede is a ten day long annual rodeo event held every July that is billed as "The Greatest Outdoor Show on Earth". The festival also has various parades, stage shows, concerts and other competitions. The Stampede is closely tied to the city's identity leading to it being nicknamed "Cowtown".
Source: Author zorba_scank 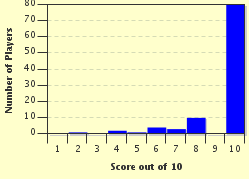