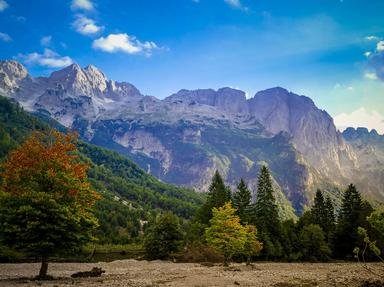 Though much in the news in recent years, this small Balkan country is not well known. There are plenty of multiple choice questions. Test your knowledge and have fun.

Quiz Answer Key and Fun Facts
1. Which of the following countries (or territories) does Albania *not* border on?

Albania borders on Montenegro, Macedonia (Former Yugoslav Republic of), Kosovo and on Greece.
2. On which sea is most of Albania's coastline?

The main port is Dürres, sometimes also known by its Italian name, Durazzo.
3. There is disagreement about the population of Albania. Which of these ranges is generally accepted?

There also many Albanians in Kosovo and there is an Albanian community in the Former Yugoslav Republic of Macedonia.
4. What is the approximate area of Albania in square miles?

The country is small and mountainous, with few natural resources.
5. What is the capital of Albania?

Tirana is the Italian version of the name. Before independence, it was a no more than a village. A few other places were bigger, such as Elbasan, but were less central.
6. What is the main port of Albania?

Durres is sometimes called by its Italian name, Durazzo. For a time, Durres was part of the Venetian Empire.
7. For nearly four centuries Albania was part of an Empire. Which?

Under Skanderbeg, the Albanians managed to resist the Ottoman Turks till 1468 - much longer than other areas in the Balkans.
8. When did Albania gain its independence?

The independence of Albania was not widely recognized by other countries till the following year, 1913. Moreover, many Albanians lived - and still live - in adjacent countries and territories Macedonia and Kosovo.
9. In 1939 Albania was invaded by another country in the region. Which one?

Mussolini used Albania as the launch-pad for his attack on Greece in WWII.
10. The heraldic creature of Albania is the double-headed eagle. Which of these reasons is generally cited?


Answer: As the Byzantine flag it came to symbolize resistance to Ottoman rule

The double-headed eagle (on a purple ground) was also the flag of the Albanian national hero, Skanderbeg. He almost certainly used it because it was the flag of Byzantium.
Source: Author bloomsby 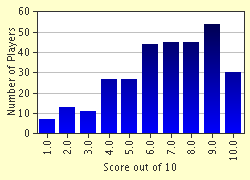