Take a trip around Hong Kong and learn about Britain's lost colony. A blend of old and new. All answers are as at the end of the year 2005.

Share on Facebook
Share on Twitter
Share by E-Mail
Author
mochyn
Time
4 mins
Type
Multiple Choice
Quiz #
227,482
Updated
Dec 03 21
# Qns
10
Difficulty
Tough
Avg Score
5 / 10
Plays
610
This quiz has 2 formats: you can play it as a or as shown below.
Scroll down to the bottom for the answer key.

Quiz Answer Key and Fun Facts
1. What year was Hong Kong handed back to China?

The last piece of Hong Kong to fall under the control of the British was the New Territories. This was purchased in 1898 on a 99 year lease which meant that it would revert back to Chinese ownership in 1997. At the meeting between the British and the Chinese in 1984, it was agreed that Kowloon and Hong Kong Island would be included in the handover.
2. A new airport was built in 1998. Where was it built?

Since Kai Tak airport was operating at capacity, it was decided to create a new airport on the outskirts of Hong Kong. The island of Chep Lap Kok was chosen and levelled. After the last flight on the 5th July 1998, there was a massive logistical move to the new airport, which opened the following morning on schedule.
3. Margaret Thatcher signed an agreement in 1984, handing Hong Kong back to China. Who signed for the Chinese side?

The agreement was signed by Margaret Thatcher and her Chinese counterpart, Zhao Ziyang although the most senior Chinese official present was Deng Xiaoping. Deng expressed a wish to visit Hong Kong after the handover but he died, aged 92, in February 1997, just months before the handover on 1st July 1997.
4. A clock tower stands in Tsim Sha Tsui. What is it a remnant of?

In the early days, the only way to get to Hong Kong Island, was to catch the train to the Star Ferry and then use the ferry to get to the island. Now as there are roads and underground trains to the island, the train station has been moved to a new location at Hung Hom, but the clock tower has been preserved as part of the original station.
5. The symbol of the Hong Kong Tourist Association is a Chinese junk.What is it called?

You can see the red Duk Ling on shop windows as a symbol which tells shoppers that this is a recommended place to shop.
6. What was the name of the first Chief Executive of Hong Kong?

Although not wanted in the public opinion polls carried out in Hong Kong prior to the handover, he was feted by the Chinese hierarchy. Since there was no democracy yet in Hong Kong, the choice of the first Chief Executive lay in the votes of 400 Hong Kong citizens chosen by the Chinese Government.

It was a one horse race as was the choice of his successor.Tung was Chief Executive from 1st July 1997 to 12th March 2005.
7. What is the name of Hong Kong's highest mountain?

At 957 metres , Tai Mo Shan or Big Hat Mountain is the highest point in Hong Kong.
8. What is the largest denomination bank note issued in Hong Kong?

Bank notes are only issued by The Hong Kong and Shanghai Bank,The Bank Of China and The Standard Chartered Bank.The highest denomination is $1000 and is yellowish gold in colour.The lowest is the $10 which is mainly purple in colour and was issued in response to the public's demand for a note to replace the $10 coin.This note is sought after during Chinese New Year when it is used to give as lucky money, a Chinese tradition.
9. What is Hong Kong's most visited theme park?

Since opening in Sept 2005, Disneyland has overtaken Ocean Park as the place most Hong Kong children would like to go.
10. On claiming Hong Kong in 1841, where did the British plant the flag?

They actually planted it at a place called Possession Point but with the reclamation of land in Hong Kong it is no longer on the coast but inland.
Source: Author mochyn

This quiz was reviewed by FunTrivia editor minch before going online.
Any errors found in FunTrivia content are routinely corrected through our feedback system.
Most Recent Scores
Jan 24 2023 : Guest 94: 2/10
Dec 24 2022 : Guest 82: 6/10 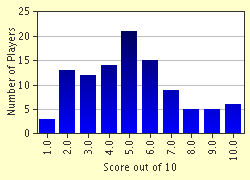 
Other Destinations
Explore Other Quizzes by mochyn