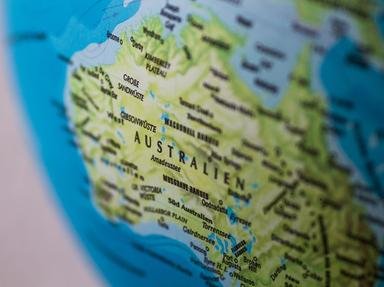 Where in Australia is That? Trivia Quiz

This quiz tests your understanding of the geography of Australia.

Quiz Answer Key and Fun Facts
1. Which is the only Australian state or territory capital city that is not located by the ocean?

Canberra is also the capital city of Australia, roughly located equal distance between Melbourne and Sydney. The city is the home of Parliament House, where national government issues are decided upon. Of the cities mentioned above Alice Springs also does not have a seaside location, however it is not a capital city.
2. Which Australian city is situated almost an equal distance between Adelaide and Darwin and is often simply referred to as 'The Alice'?

Alice Springs is located in the Northern Territory in an area known as Central Australia. The city is the second most populous settlement in the Territory and has a large indigenous population. One of the features of Alice Springs is the School of the Air that until recently provided education via radio waves for children that lived in remote areas of the Territory. Most children now receive their education via the internet.
3. The Yarra River passes through which Australian city?

This river begins in the Yarra ranges and empties into the ocean at Port Philip. The length of the river is around 240 kilometres. Some animals that can be found in the river include species of fish such as the Murray cod, jellyfish and occasionally dolphins.
4. Which Australian city is considered to be one of the world's most isolated cities? The Swan River passes through it.

Hobart is the capital of Tasmania. Tasmania and mainland Australia are separated by a body of water known as Bass Strait. Common access to Tasmania is gained by aeroplane or the ferry "Spirit of Tasmania". Hobart is usually noted as having a cooler climate than its closest state Victoria.
6. The landmarks the Harbour Bridge and Opera House are well known by tourists worldwide but they are located in which Australian state capital city?

Sydney is the most populated city in Australia and is home to many of Australia's tourist attractions. The Sydney Harbour Bridge passes over a body of water correctly named as Port Jackson but known by locals simply as Sydney Harbour. Port Jackson is the largest natural harbour in the world.
7. Which Australian state does a series of mountains known as the Great Dividing Range NOT pass through?

The Great Dividing range is the fourth longest mountain range on Earth. The mountains have a significant effect on the weather and temperatures on either side of the mountains can differ greatly. It begins at the Grampians near Melbourne and stretches more than 3,500 kilometres across the New South Wales and Queensland borders.
8. The Murray River creates the border between which two Australian States?

The Murray River is the longest river in Australia and stretches for more than 2000 kilometres and passes through three states. Some of the larger cities and towns that have settled near the Murray include Mildura, Murray Bridge, Wodonga and Echuca. The river is home to a number of animals including Murray cod, Murray short-necked turtle and platypus.
9. One of the most devastating cyclones to ever hit Australia occurred on Christmas Eve 1974 in which Australian capital city?

Cyclone Tracy was responsible for the death of more than 70 people, destroying over 70 percent of Darwin's buildings and leaving more than 40,000 people homeless. According to the Bureau of Meteorology, Australia records an average of 13 cyclones per year and more than half of these occur in the Western regions of Australia.
10. Which Australian lake is the lowest point in Australia?

Lake Eyre at its deepest point is 15 metres below sea level. It is located in the state of South Australia about 700 kilometres north of Adelaide. It is a salt lake and when full it is the largest lake in Australia, however the lake is rarely full. During the rainfall season a number of birds migrate to Lake Eyre, including Australian pelicans.
Source: Author emmco 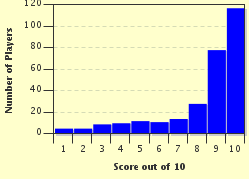 Related Quizzes
1. Picture Perfect! Tough
2. Everything Aussie Average
3. Australian Geography - Millionaire Format Average
4. The Big One Average
5. Australia: Between a Rock and a Hard Place Average
6. The Land 'Down Under' Average
7. The Land Down Under Average
8. Love Letters to Europe Easier
9. An Australian Trivia Muster Average
10. Where Am I In Australia? Average
11. True Blue Aussie Average
12. The Road Less Traveled Average


Other Destinations
Explore Other Quizzes by emmco