Another Man's Cause Trivia Quiz

The United States has often been involved in the political affairs of other countries, especially of the countries in Latin America. What do you know about them?

Quiz Answer Key and Fun Facts
1. What war was going on in Mexico when the United States first intervened there in the 20th century?

The Mexican Revolution began in 1910 when Francisco I. Madero, a Mexican politician, rebelled against the then President of Mexico and headed a revolt. After the rise and fall of several leaders, the revolution ended with the approving of the Mexican Constitution of 1917, although fighting continued till the end of the 1920s.

Despite the war clearly being another man's cause, the United States was actively involved during a few years, notably 1914 and 1916. A major reason for American involvement was that the revolution could potentially inflict a severe blow on the United States' economy, which at the time was linked to Mexico's economy, which as a matter of course deteriorated during the succession of conflicts.
2. What incident, related to the Ypiranga Incident, was the first battle between United States forces and Mexican troops during the US intervention in Mexico in the 1900s?

The Occupation of Veracruz had several causes, one of which was the Ypiranga Incident, when the United States attempted to intercept the Ypiranga, a ship allegedly bringing weapons to Mexico for the use of the Mexican government in power at the time. The relationship between the two countries had already been strained, however, and the incident (which culminated in the Ypiranga reaching Mexico, anyway) was merely a factor.

American forces entered Veracruz on April 21, 1914. During the ensuing conflict, approximately 20 Americans and 150 Mexicans lost their lives. The US marines occupied Veracruz until November.
3. In which country did the United States lead a coup d'etat in 1954, deposing the then President?

The CIA did most of the work, and the operation successfully culminated in the installation of Colonel Castillo as president. However, the operation was a longer term failure, since Castillo proved to be quite useless as a leader, and several coups d'etat later, Guatemala was plunged into a civil war. Truly, that was one instance where the country might have been better off dealing with its own causes.
4. In 1965 the United States occupied one of these Latin American countries for the second time in the 20th century. Which of these was it?

As a result of the civil war in the Dominican Republic and the Cold War which at the time was still continuing, US troops were sent to occupy the country for a period of time. However, the Dominican Loyalist party triumphed, and American troops were no longer needed. The United States withdrew after a year long occupation.

The first time America sent troops into the Dominican Republic was in the early 1900s during the Banana Wars.
5. Which Caribbean country, at the time undergoing various changes of leadership and conflicts, did the United States invade in 1983?

Since Grenada's independence from Britain in 1974, the nation had been through the revolution's leader, another revolution, a seizure of power by another party, and a military coup, which was in power until the invasion.

For political reasons, in particular fear of Communism, the United States sent troops into Grenada on the 25th of October, in 1983, ostensibly to overthrow the military government. In the aftermath, constitutional government was reestablished in Grenada.
6. Which manmade structure, worked on by two different countries before the US finished it in 1914, was an indirect cause for a US invasion of the Latin American country it belonged to, exactly 75 years later?

The Panama Canal was initially begun by Colombia. Construction was continued by France, and finally completed by the United States, which owned the canal until the signing of the Torrijos-Carter Treaties, which gave Panama ownership of the canal. Ten years later, however, US military forces had not left Panama, nor had many other US citizens, whose presence served as a reason for the invasion of Panama by the United States.
7. In the case of the 1989 invasion of Panama, was there ever an official declaration of war between Panama and the United States?

Although the Panamanian government stated that a "state of war existed between" the two countries, war was never formally declared, not that there needs to be a declaration of war before a war begins.

Ostensibly, the invasion's purposes were to protect the US citizens and troops in Panama, uphold democracy in Panama (yet another general was in power), and crack down on illegal handling of drugs. While who was ruling was clearly the Panamanians' business, the United States fought for their cause, deposed the ruler and saw another man elected before the troops were withdrawn in the early 1990s.
8. Relationships, mainly economic, between Cuba and the United States had roots that ran deep, going back to before the American Revolutionary War. As a result, when Cuba attempted to break from Spanish rule in the late 19th century, the Cubans looked quite naturally looked to the United States for help. Which war, viewed by some as the American intervention for Cuba, ensued?

War between the United States and Spain began and ended in 1898 with an American victory, making the US owner of Cuba until Cuba was granted independence in 1902, although US armies stayed in Cuba until the signing of the Platt Agreement, which stated that the United States had the right to intervene in Cuba's causes.
9. The United States' intervention in Cuban affairs did not end with Cuban Independence. After Cuba changed governments in 1959, the United States began once again concerning itself in another country's causes. Tension mounted, causing which major incident, in which Cuba was invaded by a CIA trained army?

The United States' Central Intelligence Agency formed and trained a group of Cuban exiles, who made the failed attempt to invade Cuba in 1961, the Bay of Pigs Invasion. That was the worst fighting during the period of fighting. America and Cuba did not go to war, but relations between the two countries have remained strained ever since 1959.
10. When Haiti saw the arrival of United States in 1915, how many presidents had the country gone through within a period of four years?

1. Cincinnatus Leconte led a revolt and became president in 1911, and was killed in August of 1912.
2. Tancrčde Auguste led the country from the death of the previous president to his death in May, 1913.
3. Michel Oreste was president from Auguste's death to his own deposition in the first month of 1914.
4. Oreste Zamor served as president from the month of overthrowing Michel Oreste to October of the same year.
5. Joseph Davilmar Théodore seized power in October, 1914, and lasted as president till February of 1915 when he was forced to resign due to his inability to manage the country.
6. Vilbrun Guillaume Sam became the next president, and important personage because he helped Leconte become president, overthrew Zamor (and later ordered his death), and was president for 4 months until July of 1915.

Fearing for the future of American-Haiti relations, the United States sent armed forces, which occupied Haiti for nineteen years. Between 1994-1995, America returned to Haiti to remove yet another government set up because of another coup d'etat.
Source: Author Mariamir 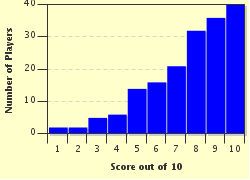 
Other Destinations
Explore Other Quizzes by Mariamir