Let's see how much you know about this cozy little country's history! If you ever get the opportunity, I highly recommend visiting it! Have fun and good luck!

Quiz Answer Key and Fun Facts
1. What is the capital of Costa Rica?

San José is the largest city in Costa Rica.
2. What is the name of the Costa Rican Army?

Costa Rica does not have an army. It was abolished in 1949.
3. Who was the first European explorer to make landfall at Costa Rica?

Costa Rica was discovered on his fourth and final voyage to the "New World".
4. What country lies north of Costa Rica?

Costa Rica only borders two countries. They are Nicaragua to the north and Panama to the south.
5. When was Costa Rica discovered by Europeans?

The Spaniards were never able to subdue the natives, though.
6. What does Costa Rica mean in English?

The Spaniards were so impressed by gold ornaments displayed by the natives that they decided it was the richest coast they had encountered.
7. What language do Costa Ricans speak?

Their language evolved from the Spaniards. When visiting Costa Rica, one will notice they use a dialect similar to Spain.
8. Costa Rica was declared independent of Spain in what year?

The separation from Spain was peaceful.
9. Costa Rica is the country of many small exports, which grouping is from there?

Costa Rican's economics have relied on their many small exports. Then five years ago, Intel put a manufacturing plant in the heart of the country.
10. How much tax would a local Costa Rican have to pay on a brand new automobile?

That's right! That means a car costing $20k would actually cost you $40k (unless you were to import it if you moved there).
Source: Author jillfreddy 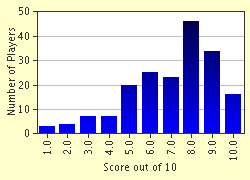 Related Quizzes
1. Another Man's Cause Average
2. At a Glance: A History of Caribbean Nations Difficult
3. An Episode in the Life of a Banana Republic Average
4. A Sad Finish 2 Average
5. Latin American Events of the 19th Century Difficult
6. Bolivar: The Other Great American Revolutionary Tough
7. History of Port-au-Prince Average
8. Latin American Mixture Average
9. South American History Sampler Average
10. West Indies - History In The Isles Average
11. Oh No! The Bananas are Under Attack! Average
12. Tales of Guyana Average


Other Destinations
Explore Other Quizzes by jillfreddy