We know they are the big four in Mesoamerican pre-history, but which one is which? This quiz might help sort things out.

Quiz Answer Key and Fun Facts
1. Which is reckoned to have built the first cities?

1500 BC is a reasonable approximation for the first Olmec cities. The first Maya cities date from around 750 BC, the first Inca cities around 1200 AD, and the earliest Aztec cities from about 1325 AD.
2. Which ancient civilization in the Americas developed what is considered the most sophisticated system of writing?

It's the only one that linguists have managed to translate into modern languages, at any rate. It is still being taught in Mexico in many areas where it is currently spoken. The Inca used knotted ropes known as quipu in lieu of writing. The Aztec system did not include an alphabet and was internally inconsistent.

The Olmec used a system that was relatively simplistic compared that to the Maya.
3. Cortez was responsible for the fall of which empire?

Full name Hernán Cortés de Monroy y Pizarro. Neil Young wrote a song about him called "Cortez the Killer". He is traditionally regarded as the archetypal brutal conquistador, but there are few reliable sources. He was born in Spain in 1485. He died in 1547, also in Spain.
4. Which civilization created the well-known giant stone heads?

The Inca had a quite advanced civilization, but never developed a system of writing. They were the largest civilization in the Americas before Columbus. The Spanish conquest of the Incan Empire began in 1532 and was completed forty years later.
6. The ill-fated Emperor Atahualpa ruled which of these?

He was murdered in the course of the conquest by Francisco Pizarro, although Pizarro claimed to have been against the deed. Atahualpa was forced to give a tremendous amount of gold and silver to Pizarro, allegedly in exchange for his life. The deal was not honored, and Atahualpa was garrotted.
7. Which present day country was home to the Aztecs?

The Aztec Empire spanned both the Atlantic and Pacific coasts of central Mexico. Their capital was Tenochtitlan. The Aztecs are regarded as the last significant mesoamerican civilization.
8. Which civilization spoke the Nahuatl language?

The Aztec civilization could be referred to as all those peoples who used the language, but there is some debate. Nahuatl refers to Aztec branch of the Uto-Aztecan language family. Some English words have Nahuatl origins, including chocolate, avocado, and peyote.
9. Which was the first to develop a 365 day a year calendar?

The Maya people were advanced as far as astronomical knowledge was concerned. Some contemporary persons believed the Maya calendar predicted the end of the world in 2012. Among the manifestations of the alleged belief was a major Hollywood movie called "2012". Most scientists posit the world did not end in 2012.
10. Which culture was called by another "the rubber people"?

Olmec by Aztec. The Olmec used rubber for many purposes. Among them was making balls for a game best translated as "Ball Game". It was a game one did not want to lose.
Source: Author DaMoopies 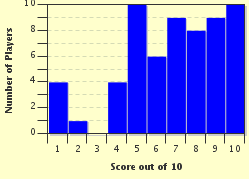 Related Quizzes
1. Another Man's Cause Average
2. At a Glance: A History of Caribbean Nations Difficult
3. An Episode in the Life of a Banana Republic Average
4. A Sad Finish 2 Average
5. Costa Rica History Average
6. Latin American Events of the 19th Century Difficult
7. Bolivar: The Other Great American Revolutionary Tough
8. History of Port-au-Prince Average
9. Latin American Mixture Average
10. South American History Sampler Average
11. West Indies - History In The Isles Average
12. Oh No! The Bananas are Under Attack! Average


Other Destinations
Explore Other Quizzes by DaMoopies