History of the Dominican Republic from the beginning of the twentieth century. This quiz starts where Part I ended.

Quiz Answer Key and Fun Facts
1. By 1916 the Dominican Republic had been in a state of civil war for five years (having been close to civil war many years before that). What were the two major factions vying for power in 1916, before the U.S. government established a formal (illegal) military government over the country in November of that year?

These two factions had been prominent from the first years of the century, and had lost power during the administration of president Ramón Cáceres. When Cáceres was assassinated in 1911, however, the two parties returned to the fore and the country was largely split into Jimenista and Horacista factions until direct U.S. occupation.
2. One of the most well-known (and notorious) characters of Dominican history is General Rafael Leonidas Trujillo Molina, who would become dictator over the country within 6 years of the end of U.S. occupation. He got his start by joining the U.S.-created military (the Guardia Nacional Dominicana, or GND), however, in what year?

The GND was not created until April 1917. Trujillo joined up on December 18 (a date he had celebrated throughout the country during his dictatorship) of 1918. By 1921 he had advanced through the ranks, and by 1928 (4 years after U.S. withdrawal in 1924) he was head of the Dominican military and, in that year, changed the name of the military to the "National Army" (Ejército Nacional).
3. The first U.S. military governor of the Dominican Republic was, ironically, only a captain of the U.S. Navy at the time he took the post. He was also the man who named the military government in November 1916. Who was he?

Thomas Snowden was the second military governor--and probably the most controversial. In fact, while Knapp in many ways tried to include Dominicans (if only in the capacity of advisors) in the military government, Snowden pushed them out; his public statement in 1919, in which he announced that the United States would be governing the D.R. for a very long time to come (perhaps for generations) strengthened the Dominican resistance movement and began the first real steps toward U.S. withdrawal. Sumner Welles, who wrote an incredibly in-depth two-volume history of the Dominican Republic, was U.S. special commissioner in the Dominican Republic and aided in executing the plans for U.S. withdrawal.
4. In this year during the U.S. occupation, when many countries worldwide were suffering severe recessions, the Dominican Republic actually had a booming economy, called "La Danza de los Millones" ("The Dance of Millions"). During what year did the Dominican Republic reap most of the benefits of this economic boom?

Having had most of its trade redirected toward the United States and away from European economies during the occupation, the Dominican Republic was able to reap the benefits of a strong U.S. economy while its former trading partners (primarily Germany) suffered severe recession.

Unfortunately, this economic boom only lasted about one year, and by the following year the country was nearing economic ruin.
5. Trujillo came to full power over the country in 1930, pursuing caudillo-type dictatorial policies and repressing the citizenry with a very strong U.S.-trained National Army. In 1937, on the orders of the openly racist dictator, Haitians were massacred primarily along which river?

Even the U.S. temporarily turned its support away from Trujillo's dictatorship due to international reaction against the massacre--this diplomatic censure was very short-lived, however, and Trujillo continued to rule until his assassination in 1961; the question of the Haitian massacre was settled, at least in the opinion of the United States, when Trujillo's government paid slightly over half a million dollars in compensation to the Haitian government.

The Ozama River runs through the capital city of Santo Domingo.
6. When Fidel Castro came to power in the Cuban Revolution of 1959, he was very supportive of the Trujillo government and offered subsidies to help build up the Dominican military.

Castro was actually active in trying to aid Dominican exiles in the overthrow of Trujillo's government.
7. Rafael Trujillo was assassinated in 1961 (the anniversary of which is celebrated today in the Dominican Republic). The United States was not done with intervening--when civil war again threatened the country in the years after Trujillo's death, the United States intervened militarily under whose U.S. presidency?

This brief but very destructive intervention occurred in 1965, and was used by President Johnson to distract the public attention from dissatisfaction with Vietnam. Johnson lied blatantly about the Dominican situation on national television for weeks and failed to let on that the government being overthrown by the U.S. was an elected democracy trying to regain power--but Johnson's approval ratings shot up during the brief period (only to fall again afterward, due to escalation of the Vietnam conflict).

The democratically elected leader who was trying to regain power in 1965 was Juan Bosch, also a prolific writer about Dominican history and politics--he was not Communist, but argued that the (very few) Communists in the Dominican Republic should be tolerated; not acceptable to the United States during Johnson's Cold War years of "containment".
8. Which man who gained his power primarily under the Trujillo regime came back to power in the presidency repeatedly in the decades following Trujillo's assassination and played a major role in Dominican politics until his death, even when he wasn't in the office of the presidency?

Balaguer defeated Bosch in the 1966 elections with U.S. support; he became president again from 1986-1996, and ran yet again in 2000, though he did not win that election (he won 24.6% of the vote in the first round). Hipólito Mejía became the Dominican president that year instead.
9. In what year did Cuba restore diplomatic relations with the Dominican Republic?

Castro restored relations with the Dominican Republic on April 8 of 1998, visiting the country on April 20th of the same year. This was the same year that the devastating Hurricane Georges hit the Dominican Republic in September, killing at least 12 people.
10. On May 24, 2004, the island of Hispaniola was hit by torrential rains and damaging floods. Of the following numbers, which most closely represents the death toll for the entire island?

The Haitian town of Mopau, alone, suffered around 1,000 casualties in the flooding.
Source: Author socratessoul 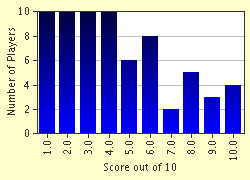 Related Quizzes
1. A Sad Finish 2 Average
2. An Episode in the Life of a Banana Republic Average
3. Another Man's Cause Average
4. At a Glance: A History of Caribbean Nations Difficult
5. Aztec, Inca, Olmec, or Maya? Average
6. Bolivar: The Other Great American Revolutionary Tough
7. Costa Rica History Average
8. Grenades over Grenada Average
9. History of Montevideo Average
10. History of Port-au-Prince Average
11. History of the Bahamas: Discovery Tough
12. Jesuit Reductions in South America Tough


Other Destinations
Explore Other Quizzes by socratessoul