The title says it all.

Quiz Answer Key and Fun Facts
1. True or false : The ancient Maya were a peace-loving society ruled by astrologer-mathematicians.

Despite romanticized misconceptions to the contrary, the ancient Maya were ruled by warlords and had a taste for human sacrifice, incessant warfare, and all kinds of other mean, nasty things.
2. Which of the following is NOT the site of a Mayan city?

Monte Alban is a Zapotec site in Oaxaca. Pulltrouser Swamp, despite its unlikely name, is a Mayan site in Belize (formerly British Honduras) where such descriptive place-names are not particularly uncommon.
3. Among their many achievements, the Ancient Maya are NOT credited with:

While everyone knows that the Maya knew about the quantity zero, many of us continue to labor under the delusion that the wheel and the 'true' arch did not exist in the pre-columbian New World. In actuality, the Maya world contains many examples of the 'true' arch. That the corbelled arch is the far more common architectural device has been attributed by some archaeologists to the fact that it is a far more stable construct.

In Central America, one of the world's most seismically active areas, it is not surprising that builders would opt for an arch that favored stability during earthquakes.

As for the wheel, numerous pre-Columbian wheeled artifacts -- mostly toy figures -- have been found. That the wheel was not in widespread use as transport is not surprising when we consider that the Maya had no draft animals.
4. Of the estimated thousands of Mayan books or codices that existed at the time of Spanish conquest, how many are known to currently exist?

The four known codices are the Dresden Codex, the Paris Codex, the Madrid Codex and the Grolier Codex. The names of the first three are based on the European cities where they currently reside. Through the World Court, Mexico is in the process of trying to gain possession. Thus far, efforts to this end have been hampered by the fact that the provenance of each codex is debatable.

While it seems likely that at least two of three came from Mexican lands, Belize, Honduras, Guatemala and El Salvador can also lay claim to the cultural patrimony that created them.
5. In current archaeological circles, it is thought that Teotihuacan conquered much of the Mayan lands.

There is much evidence to suggest a strong trading relationship between Teotihuacan and some of the Mayan city states but there is little that indicates a subordinate position on the part of the Maya. As argued by some archaeolgists, the difficulty with the supposition that Teotihuacan was able to conquer the Mayan city states lies in the fact that there were no beasts of burden in Mezo-America.

As such, all provisions had to be carried on the backs of soldiers themselves. As Napoleon said, 'An army travels on its stomach.' The notion that Teotihuacan would have been able to mobilize an army against an amorphous group of powerful city states that were over a thousand miles to its south, requires a set of provisos that are so specialized that Occam's razor demands that we look for a simpler explanation. Too, there is no period-specific set of cultural commonalities among the various Maya city states that suggests the kind of homogeneity we expect to see when one people is ruled by another.
6. True or false: The Maya developed the only full-fledged written language in the New World.

While virtually all of the complex Mezo-American cultures used some kind of notation for accounting and general records, the Maya, based on current information, were the only culture to develop a fully articulated writing system that was capable of expressing compound sentences and abstract ideas.
7. Of the following, which city-state was NOT a major center of Mayan culture during the 'classic period'?

In common with all of the other city-states of Northern Yucatan, Chichen Itza did not come into its fluoresence until the post-classic. The cities at Palenque, Tikal and Copan had by then, fallen into decline.
8. The Maya civilization is widely thought to have been influenced by which pre-Mayan culture?

Olmec. Not much to say about this one. The Aztec and Zapotec were not contemporary with the ancient Maya. The Inca lived on a completely different continent.
9. What does the Mayan word 'balam' mean?

'Balam' means jaguar. As in the the name of one of the rulers of Palenque, 'Yax Kan Balam,' pronounced 'yash kahn bahlahm.' It means 'Lord Serpent Jaguar.'
10. The ancient Maya developed a functional calendar that is ___ .


Answer: more accurate than our own 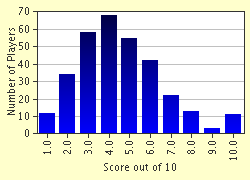 
Other Destinations
Explore Other Quizzes by maddogmorgan