Time to make some tea! But how much do you know about this wonderful herb and drink? Take my quiz to find out! Good luck!

Quiz Answer Key and Fun Facts
1. Tea has been widely consumed in China for thousands of years, but during what Dynasty did it spread to Japan?

Tea grows spontaneously in the wild only in China, India, and Burma. Its origin is a stretch of land around Northern Burma and Southern China. When it was first consumed in China, it was quickly spread to other countries in Asia. Eventually, Buddhist monks travelling to Japan brought tea with them and spread it to the island nation.
2. Robert Fortune can be attributed to transporting tea from China to what country in 1848 in order to help the British Empire?

Britain badly wanted to cultivate tea in India, as they wanted to sell it to India for a profit. In order to do so, they sent Robert Fortune on a secret mission to collect tea plants and bring them to India. The mission had to be secret because China was in between its Opium Wars with Britain and didn't want foreigners.

Despite his mission being a success, plants native to the Himalaya region in India were more successful than the plants Fortune brought from China, and were used by the British instead.
3. Brooke Bond launched what tea brand in 1930 by marketing its tea as a pre-meal drink to help you digest your food?

PG Tips used to be called Pre-Gest-Tee, which meant you were supposed to drink it before your meal to aid digestion. Marketing tea as able to aid digestion was banned after World War II, so the name was changed to PG Tips. In 2007, Unilever, the owner of PG tips, made a promise to only use sustainable teas, and by 2012 they had achieved their goal.
4. Chai tea is a popular drink in India and around the world, but what part of the tea is the Karha?

The Karha of Chai tea can be composed of many different ingredients. Cardamom is usually the dominant flavor, but cinnamon, anise seeds, ginger, and cloves are all also used. Generally, milk and water are boiled together, and then the black tea leaves are infused, followed by the spices. Chai tea was invented when the British refined teas that already existed in India.
5. Earl Grey Tea, a type of tea with a citrus flavor, gets its distinctive flavor from the extract of a fruit that shares its name with what citrus fruit?

Earl Grey Tea uses the Bergamot orange, which, despite its name, is actually a cross between the sweet lemon and the bitter orange. Bergamot oranges are most commonly grown in Reggio, in Calabria, Italy. There are many different types of Earl Grey Tea, and Earl Grey Tea can be used as a flavoring in many different things, such as cakes and savory sauces.
6. Oolong tea is a well enjoyed tea by many, but what does oolong mean when translated from Mandarin Chinese to English?

Oolong tea is known for the special process that is needed to create it. The plants need to be withered in the sun then oxidated. Due to the different amounts of sun and oxidation possible, there are many varieties of oolong teas, and many different flavors of tea possible.
7. Despite its name, Orange Pekoe tea is not orange. It is actually what type of tea?

Orange Pekoe Tea gets its name from the Orange Pekoe Scale, a scale which is used to measure a tea's quality. In most regions of the world it describes whole tea leaves of a medium quality. In North America, however, it generally describes any sort of black tea.
8. Sleepytime Tea is a popular drink made by Celestial Seasonings, but what is so special about it?


Answer: It contains no tea leaves

Sleepytime tea is what's known as an herbal tea, which means that it contains herbs but no tea leaves. It is meant to be consumed in a normal fashion, and is caffeine free. The name Sleepytime gets its name from the valerian, which is a sedative, found in the tea.
9. White tea is a lesser known but still popular drink from around the world, but what color is the tea after it is prepared and boiled?

White tea is the healthiest out of teas that come from Camellia sinensis, the plant that is also the source of black and green teas. The differences come in the process needed to make the teas. White tea is made when leaves and buds of the plant are withered in sunlight to create the light color. Black tea is oxidated to create the dark color. Green tea is simply the natural leaves of the Camellia sinensis plant.
10. Bubble tea, which originated in Taiwan, has spherical balls of what ingredient inside?

Bubble tea gets its name from the Chinese word boba, which means large. This is due to the large balls of tapioca found in the tea. It is most popular in Taiwan. Unfortunately, there have been known scandals involving the uses of additives in bubble tea, resulting in a major scandal in Taiwan in 2011 due to a carcinogen being added to some brands of the tea.
Source: Author Oidioid32123 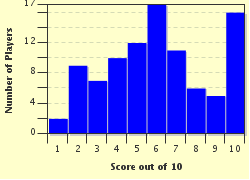 
Other Destinations
Explore Other Quizzes by Oidioid32123