The Joy of Not Cooking! Trivia Quiz

Let's go on a worldwide tour, and see some, well, oddly themed restaurants that you can visit. Some knowledge of Geography might help!

Quiz Answer Key and Fun Facts
1. Is an M16 Carbine meat sandwich what you fancy? What about a vegetarian side called a "Terrorist Meal". If you answered yes, you can come on down to Buns and Guns Restaurant in which Middle Eastern city, devastated by a war in 2006?

Everything is military-themed inside the restaurant, and patrons can listen to the sound of helicopters in the background while eating their meal. The restaurant's manager Yussaf Ibrahim says that his eatery tries to reflect the mood of the Lebanon capital during the 2006 war with neighboring Israel in which Beirut was leveled by Israeli bombings. Take caution however, a poster at the front of the restaurant simply states the company slogan that "Sandwiches Can Kill You".
2. While in Tokyo, how about a stop at "Nyotaimori". The name makes it sound like a nice place you think. But "Nyotaimori" translates into English as "female body plate". This restaurant takes to the tradition of eating what off of a nude women's body?

The concept of "Nyotaimori" is taken to a whole new level. An edible body, with skin made of dough and sauce looking like dough is wheeled out on a hospital gurney. The hostess (or nurse) then cuts into the body with a scalpel to open it up, and letting customers dig around with the edible organs.

The practice of Nyotaimori is not common in Japanese culture but has gained notoriety worldwide for what it is.
3. A restaurant with a death theme isn't the most ideal place to have a meal, but if it is you can head to the Eternity Restaurant in Truskavets, Ukraine. What is this building shaped like?

Built by a group of undertakers, the restaurant opened up in 2008 near the Ukraine border with Poland. The coffin isn't that big (20 meters long x6 meters wide x 6 meters tall), but it did grab the title as world's largest coffin when it opened. The coffin is made completely of pine, and visitors can dine on a meal called "Let's Meet in Paradise".

Inside, wreaths line the walls and there is one candle on each table, adding to the funeral feel.
4. This next restaurant angered lots of people in the nearby area when it opened. The restaurant "Hitler's Cross" is oddly not in Germany, or Europe for that matter. In which city was this restaurant?

The o in cross was designed to look like a swastika and the restaurant displayed a giant picture of the German chancellor when it opened in 2006. It only lasted a week however before the city ordered them to get rid of all Nazi and Hitler memoribilia.

The cafe then became the "Cross Cafe". The restaurant's owner told the media that the name was chosen because "We wanted to be different. This is one name that will stay in people's minds ... we want to tell people we are different in the way he was different."
5. Long before the Lord of the Rings movies, there was the Hobbit House in Manila, Philippines.

Started by former American Peace Corps volunteer and Tolkein fan Jim Turner, the restaurant is staffed completely by dwarfs ands other small people, which lets the place claim that they have "the smallest waiters in the world". Most of the staff were rescued from the slums and streets of Manila by Turner himself.

His staff won't just serve tables, they'll entertain. The Hobbit House frequently has hobbit jugglers, magicians, comics, dancers, flame-eaters and quite possibly the world's smallest Elvis impersonator.
6. If you're sick of waiters, welcome to the 21st century, and the first Robot-Staffed Restaurant in what country?

Patrons to the restaurant located in Nuremberg can choose their meal from a touchpad once arriving and wait for it to come to you via metal tracks that snake their way through the ceiling from the kitchen to all of the tables. Don't worry however, it is manpower still making the dishes in the back, an automatic chef still isn't invented yet.
7. Huh? While on vacation in Taipei, one can have a break at the Modern what restaurant?

From the plungers that hang as lights to the meals that come in minature toilet bowls, the chain of "Modern Toilet" restaurants through Taipei, China and Japan aim to duplicate the bathroom in their three-story eateries. Sitting on Western-style toilets as chairs, visitors can also enjoy chocolate ice cream served resembling feces. Isn't that appetizing?
8. In the United States, the chain "Johnny Rockets" interior resemble which decade?

Coming with jukebox and Coca-Cola memorabilia, the chain was founded in 1986 in Los Angeles, and had 300 outlets across America by 2010. The menu, interior, and presentation are based on "The Apple Pan" restaurant in 1947. At some locations, staff have been known to sing and dance every half hour. The fries are usually served with a ketchup smiley face is trademarked by the company.
9. Giving a whole new meaning to "serving time", this restaurant's entire staff has a diverse background.. some are robbers, other murderers. Yes, the jailbirds are the chefs for the public at the Fortezza Medicea Jail Restaurant where?

Under the watchful eye of prison guards, convicts of all backgrounds serve up dishes to the general public. All cutlery is plastic, and tables have to be booked weeks in advance due to the popularity of the food and atmosphere. The rehabilitation scheme was started in 2006 by the prison.
10. Nothing sounds more safe than the "Heart Attack Grill" right? In which "L" city is this restaurant, where everyone over 350 pounds eats free?

For the burger lovers who don't know what a diet is, the "single", "double", "triple" or "quadruple bypass surgery" burgers. The single contains *only* 8 ounces of meat, while 32 ounces are inside the quadruple. Those 32 ounces are made up of four half-pound patties, eight slices of cheese, and 16 strips of bacon. Your orders are taken by stethoscope-wielding nurses, you write prescriptions for your bypass surgery burger.
Source: Author George95 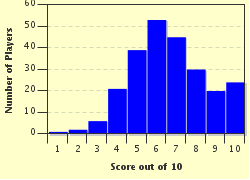 
Other Destinations
Explore Other Quizzes by George95