Try your luck on this one.

Quiz Answer Key and Fun Facts
1. In what country did chess originate?

Around 6th century A.D. Known as the Royal Game
2. Who was the long time host of 'Match Game'?

3. Which of the following chess pieces moves only diagonally?

5. What is the highest cribbage score possible in one hand?

6. What do players conquer in the end of the game of 'Risk'?

The ultimate game in global warfare made by Parker Brothers.
7. How many different colored wedges are there in Trival Pursuit?

Blue,Pink,Yellow, Brown, Green, Orange
8. Name the game that had a picture of Vincent Price on the box.

9. In what country did the modern version of badminton originate?

First played about 1873. May have started in the 1860s in India by British officers but not confirmed.
10. What is the highest ranking suit in bridge?

All bridge games stem from the game of whist.Order of suit rankings-spades,hearts,diamonds,clubs.
Source: Author steiny1 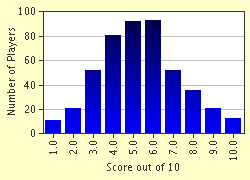 
Other Destinations
Explore Other Quizzes by steiny1