A quiz about those toys that have been entertaining kids, professionals and collectors for generations.

Quiz Answer Key and Fun Facts
1. How long have yo-yo's been around?

The yo-yo is thought to have been invented in either China or Greece based on archeological finds in those area's. There is also evidence of yo-yo's in ancient Egypt. Although these toys weren't like the modern day toy they have a lot of similarities.
2. What does the word "yo-yo" mean?

It is 'Tagalog' (the Philippine native language) for come-come.
3. The yo-yo was once used as a weapon.

The story goes that the yo-yo would have blades attached and the attacker would hide in a tree and sling it down on an unsuspecting victim. There is no evidence backing this story up and the physics of the yo-yo make this type of weapon unlikely.
4. The yo-yo is the second oldest toy in the world.

This is another widely held story with no evidence to back it up.
5. When was the first ever world yo-yo competition held?

The first world yo-yo competition was held in London,England in 1932. 13 year-old Harvey Lowe was the winner.
6. Who is the father of the modern yo-yo?

Pedro Flores started the Flores Yo-Yo Company and later sold it to Donald Duncan.
7. The yo-yo has been known by many other different names down through history.

It has been known by the following names; "bandalore" and "quiz" in Great Britain, "incroyable", "l'emigrette" and "coblentz" in France, and "disc" in Greece.
8. Where is The National Yo-Yo Musuem located in the U.S.?

It houses the world's largest public display of yo-yo's including the 256 lbs. "Big-yo".
9. On April 12th, 1985 the Yo-Yo was first taken into space. It was taken aboard a U.S. space shuttle, which shuttle was it?

The yo-yo could be thrown at slow speeds and it would follow the string to its end and rebound back, but however it would not sleep due to the lack of gravity. It was also taken aboard Atlantis on July 31st, 1992 and video taped.
10. As of May of 2004, what was the highest price ever paid for a yo-yo?

It was a yo-yo signed by former president Richard M. Nixon. He presented to Roy Acuff at the Grand Ole Opry in Nashville,Tennessee in 1974. It would later sell for $16,029.00 at an Acuff estate auction.
Source: Author fertigline 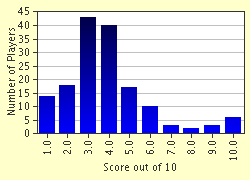 
Other Destinations
Explore Other Quizzes by fertigline