How much do you know about Basic linguistics? | Quiz

This quiz tries to give a taste of linguistics by presenting some of the basic problems.

Quiz Answer Key and Fun Facts
1. Which part of linguistics deals with the study of meanings of the lexical entries, expressions, and sentences of a certain language?

Semiotics deals with the study of signs, syntax with sentences and logic with the correct rules of deduction.
2. A morpheme is the smallest meaningful unit of a language. According to that definition, how many morphemes can be found in the word "imperfections"?

The four morphemes are:

Let's have a look at how it works. Starting out from the adjective 'perfect', by adding the suffix '-ion' to it, we get the noun 'perfection'. Now, if we add the prefix 'im-', we'll still have a noun: 'imperfection', but meaning exactly the opposite of 'perfection'. Finally, by adding '-s', the mark of the plural, we'll get 'imperfections' meaning 'more than one thing that is not perfect'.
3. "Right" and "write", "lead" and "lead", and "well" and "well" are, respectively, what?


Answer: It is a common language developed by a group of people who do not have a language in common.

Pidgin languages do have a very simple grammatical and phonological structure. Historically, they have arisen in trading situations or in places where people from many backgrounds were thrown together.
5. Which one of these is NOT a linguistic theory or a theory of language?


Answer: Either of these

This is a case of structural ambiguity: the meaning of the sentence depends on which constituents you group together. "(Child-teaching expert) Noun Phrase which should really be hyphenated (to speak) Verb Phrase" or "(Child) Noun Phrase (teaching expert to speak) Verb Phrase". The peculiar style of English newspaper titles also adds to the ambiguity of sense.
7. "I don't want nothing." The above sentence is a case of what phenomenon?

Double negatives are considered grammatically incorrect in today's standard English. However this wasn't the case until the 17th century, when prescriptive grammars became popular. These works deemed double negation as illogical, based on the laws of logic (see double negative elimination).

However, double negatives are perfectly common in Romance and Slavic languages, as well as in both modern and ancient Greek, Hungarian, Finnish and Japanese.
8. "A verb is an expression that refers to an action, or a state of being." What is wrong with that definition?


Answer: Both of these.

Definitions of lexical categories based on their meaning can be misleading; instead it may be better rely on syntactic and morphological criteria. For example, verbs are the types of lexical items that can have inflections.
9. In linguistics, what is called the "critical age"?


Answer: The age after which children lose the ability of rapid language acquisition.

If a child is not exposed to a language before the critical age, they will find it much more difficult to acquire a language fully. It is very unlikely that they ever be able to speak any language on a level comparable to that of a native speaker.
10. If "un-" in "unbelievable" is a prefix, and "-ity" in "serenity" is a suffix, then which of these is a circumfix?

Circumfixes are extremely common in Malay and in Georgian, but some cases of them exist in other languages too. In German and Dutch it's a way of forming the past participle, in Berber the circumfix "t...t" is a mark of the feminine, and in Hungarian the superlative is formed by the circumfix "leg...bb".
Source: Author nyul 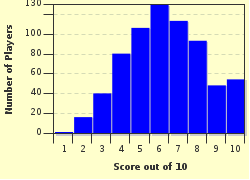 
Other Destinations
Explore Other Quizzes by nyul