Sample some questions from ancient Greece that cover literature, art and the like. Good luck!

Quiz Answer Key and Fun Facts
1. The opening line of a play by which playwright reads: 'Ismene, dear sister, You would think that we had already suffered enough...'?

This is the opening line of 'Antigone'. Greek drama developed from celebrations honoring Dionysus...(it says 'interesting info'...this isn't interesting is it?)
2. Which poet wrote: 'Water is best, and gold, like a blazing fire in the night, stands out supreme of all lordly wealth.'?

This is from 'Olympian Odes'.
3. In which of his plays did Aristophanes write: 'Well. I'm afraid you've come a fool's errand. Your wives have gone.'?

This is probably the source of the phrase 'fool's errand'.
4. Who wrote that a life of reason was: 'a life in the possession of intelligence, thought, knowledge, and a complete memory of everything, but without an atom of pleasure, or indeed pain, in a condition of utter insensibility to such things.'?

This is from 'Dialogues with Philebus'. The quote is from Socrates in the dialogue.
5. Which of the following is not credited with being an architect of the Parthenon?

Phidias handled most of the sculptural work, while the other two focused on the actually planning of the building.
6. To what age was Ovid referring when he wrote: 'Truth, modesty, and shame, the world forsook: Fraud, avarice, and force, their places took.'?

One of my favorite poems of this famous ancient poet from the island of Lesbos (as many of my friends are aware since I force it on them often).
8. Who said: 'Practice makes perfect.'?

I know...everyone has said this...but ostensibly this famous cynic who lived in a tub said it first.
9. Who said: 'We can only explain you, young man, by assuming that your father was drunk the night he begot you.'?

I know...I know...two Diogenes questions in a row...but I couldn't resist. Who could resist a man who had the temerity to ask Alexander the Great to step out of his light?
10. It was said of which Greek artist that his grapes were so lifelike birds tried to peck at them?

Zeuxis and Parrhasios were rather intense rivals. Parrhasios invited Zeuxis in to view a painting which he had covered by a curtain. When Zeuxis went to lift the curtain, he discovered it was nothing but paint.
Source: Author thejazzkickazz 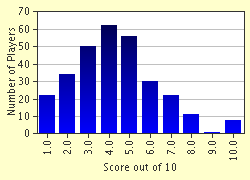