Every Jane Austen plot hinges on one or more romances (real and imagined). How much do you know about romantic attachments among JA characters? PS--please join Friends Group #116, the Jane Austen Lovers group (see homepage).

Quiz Answer Key and Fun Facts
1. Who does NOT propose marriage to Elizabeth Bennet?

Wickham seems to flirt with Elizabeth, but she doesn't have enough money to tempt him. He ends up marrying the youngest Bennet sister, Lydia. But first Wickham and Lydia live together in sin!
2. Who is in love with Harriet Smith?

Harriet falls in love with, in this order: Farmer Robert Martin, Mr. Elton, Mr. Knightley, and Robert Martin again (she ultimately marries the good farmer). But only Mr. Martin falls for Harriet.
3. Whom does Mr. Willoughby love best?

He marries Miss Grey for her money, but he doesn't love her. He apparently makes love to Colonel Brandon's ward (who gets pregnant, we assume) but he can't love or respect her much, since he leaves her in the lurch. He clearly loves Marianne, even though he abandons her for financial reasons. He feels some affection for Marianne's family, including Elinor.
4. How many women does Captain Frederick Wentworth fall in love with?

He loves Anne and Anne only, though he flirts with both of the Musgrove sisters, and people assume he is in love with Louisa.
5. In "Northanger Abbey," whom does Isabella Thorpe marry?

She's engaged to Catherine's brother James, but she jilts him once she sets her cap at Captain Tilney. Since the Captain is just toying with her, she ends up with no one--and it serves her right!
6. There are many married couples in Jane Austen. Which is a truly happy, loving couple?

At a young, impressionable age, Edward asks Lucy to marry him. Soon he repents (Lucy is a scheming, unrefined girl, despite her youth and good looks). He is too honorable to give up the engagement, even after he falls for Elinor Dashwood. Luckily his younger brother Robert steps in, leaving Edward free to marry Elinor, the woman he truly loves.
8. Which couple is secretly engaged?

Jane has no money and Frank is obligated to a rich, pernickety aunt who will surely disapprove of the match. They have to wait until Mrs. Churchill dies to announce the engagement, surprising everyone except Mr. Knightley. The secrecy causes all sorts of misunderstandings and bad feelings.
9. Why does Mr. Collins propose to his cousin Elizabeth?


Answer: He proposes to her for all of these reasons.

Mr. Collins's proposal is one of the funniest and most unromantic in all of English literature. When Elizabeth turns him down, he warns her that "your portion is unhappily so small that it will in all likelihood undo the effects of your loveliness and amiable qualifications."
10. Why doesn't Anne Elliot marry Captain Wentworth after his first proposal?


Answer: Lady Russell persuades her not to marry him.

As a young woman, Anne falls in love with Captain Wentworth and accepts his marriage proposal. Her dear friend and mother substitute Lady Russell convinces her that her suitor's prospects are not good enough, so Anne regretfully breaks her engagement. Lady Russell is somewhat snobbish and she doesn't think Captain Wentworth's rank in society is worthy of a baronet's daughter.

This is why the novel is called "Persuasion."
11. With whom does Catherine Morland fall in love?

She's young and naive, but she has the good taste to fall in love with a witty, well-principled young man who soon falls for her, too.
12. At one point in "Emma," the heroine speculates that she must be in love, but the feeling soon passes. Who is the man in question?

She is never really in love with Frank Churchill. He flirts with her a bit to cover up his secret engagement to Jane Fairfax. Mr. Elton may or may not be in love with Emma--he proposes to her, at any rate. Emma would never stoop to love Robert Martin, a lowly gentleman farmer. Mr. Knightley is the one she truly loves. Luckily, he loves her, too.
13. What goes wrong concerning Jane Bennet's romance with Mr. Bingley?


Answer: Mr. Bingley's sisters and friend whisk him away from Netherfield.

Mr. Bingley's friend Darcy convinces him that Jane is not in love with Bingley, and that her family is too vulgar to marry into. Though Bingley's sisters are friendly to Jane, they, too, think her family connections are too low. All three conspire to get Bingley safely out of Jane's reach.
14. Which of the Bennet sisters is least likely to marry?

Bookish, pompous Mary does not seem like marriage material. She might have been a good match for Mr. Collins, but he marries Charlotte Lucas. Kitty perhaps meets someone suitable while visiting the Darcys or the Bingleys.
15. What is the main element that causes Elizabeth Bennet to soften towards Mr. Darcy?

Elizabeth finds out that Darcy did not actually treat Mr. Wickham unfairly, as Wickham claimed. Even though she is angry at Darcy for breaking up Bingley and Jane, Elizabeth realizes that certain members of her family ARE a bit vulgar (so maybe Darcy was somewhat justified in warning his friend against an alliance with them).

After Darcy is very kind to her and the Gardiners at Pemberley, and later bribes Wickham into marrying Lydia, Elizabeth falls as deeply in love as he is. When he apparently tells his aunt, Lady Catherine, that he won't promise NOT to marry E., it seals the deal.
16. How does Marianne meet Willoughby?


Answer: She slips and injures her ankle. He rescues her.

This is a very romantic (and melodramatic) way to meet, no?
17. How do Elinor Dashwood and Edward Ferrars meet?


Answer: He is her sister-in-law's brother.

When Elinor's half-brother and his wife come to claim the late Mr. Dashwood's house, Mrs. John Dashwood invites her brother Edward to come for a visit. Much to his sister's dismay, Edward falls in love with Elinor.
18. What is the main impediment to Elinor and Edward's courtship?


Answer: Edward is engaged to another.

Edward is secretly engaged to Lucy Steele. Though falls out of love with Lucy soon afterwards, he is too honorable to back out of his commitment to her.
19. Whom does Margaret Dashwood marry?

In the movie "Sense and Sensibility," Margaret Dashwood is a more developed character than she is in the book. In my opinion, Jane Austen does not seem especially interested in children--she seems to think they have few distinct personality traits until they reach 17 or so. The exception to this might be the young Fanny Price.
20. What is the main impediment to Fanny Price's romance with Edmund Bertram?

Edmund falls for pretty, vivacious Mary, but when her brother runs away with Edmund's married sister, Mary reveals her flawed principles by failing to deplore the adulterous elopement, as Edmund does. The devastated Edmund falls into Fanny's waiting lap.

In my opinion, this is not one of the hottest love matches in Jane Austen. A professor of mine, Marvin Mudrick, wrote that it is hard to imagine a romantic Saturday evening at the Edmund Bertrams' home, after the prayer books are put away.
21. Why does Maria Bertram marry Mr. Rushworth?


Answer: He is very rich.

Maria is in love with Henry Crawford, but he is merely flirting with her. When she realizes this, she marries her fiance, Mr. Rushworth, a stupid but very wealthy man. After Henry falls in love with Fanny but can't persuade her to marry him, Maria and Henry rekindle their flirtation and start an adulterous affair.
22. Whom does Henry Crawford love?

Henry really does fall in love with Fanny. He runs off with Mrs. Rushworth only after Fanny rejects him.
23. How does Emma figure out that she loves Mr. Knightley?


Answer: All of these are factors.

Apparently, Emma's love for Mr. K sneaks up on her.
24. How does Captain Wentworth declare his love for Anne (for the second time)?


Answer: He slips her a secret letter.

The letter Wentworth writes is one of the best love letters in literature, in my opinion.
25. Why does Henry Tilney fall in love with Catherine Morland?


Answer: She is sweet, naive, and forthright, and she loves him.

Catherine is a more interesting character than she seems at first. She has good natural instincts and principles, but she isn't a prig. She's pretty, fresh, charming, loving, and brave.
Source: Author robynraymer 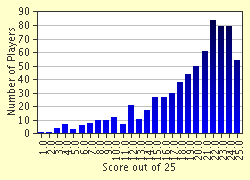