A Saucerful Of Secrets Trivia Quiz

Some boring questions for die-hards...

Share on Facebook
Share on Twitter
Share by E-Mail
Author
hexaChord
Time
7 mins
Type
Multiple Choice
Quiz #
116,832
Updated
Dec 03 21
# Qns
25
Difficulty
Difficult
Avg Score
11 / 25
Plays
1454
This quiz has 2 formats: you can play it as a or as shown below.
Scroll down to the bottom for the answer key.

"Paintbox" was the B-side of "Apples And Oranges", released in 1967.
2. Which of the following tracks was nearly released on "Ummagumma"?

The recording is on a lot of bootlegs.
3. Which of the following musicians has nothing to do with the early Floyd?

Stuart Brown had a band with some ex-members of Jokers Wild.
4. What concept did Roger Waters develop in 1978 besides "The Wall"?


Answer: The Pros and Cons of Hitch-Hiking

The band choose "The Wall" when Roger came up with two concepts for a new album.
5. Who replaced Roger Waters on "A Momentary Lapse Of Reason"?

Tony Levin might be the best bass player in the world. He is most famous for his work with King Crimson.
6. "In a while I'll find the time to make the sunshine mine. In a smile I saw a single needle in the sky." Which song are these lines from?

All of the given songs are from "Zabriskie Point", sadly a not well- known work of Pink Floyd.
7. Who appeared on an album by Arcadia ("So Red The Rose")?

Arcadia was a side project of some members of Duran Duran in the 80s.
8. "Ancient bonds are breaking, moving on and changing sides." Which song are these lines from?

All of the given songs are from "Obscured By Clouds", their second soundtrack for a Barbet Schroeder movie.
9. Who played bass on "One Of These Days"?

In fact, David plays the first bass you hear, and Roger later drops in.
10. What brand are David's main guitars?

Fender released a David Gilmour signature Strat in 2008.
11. Who produced the second album of The Damned ("Music For Pleasure")?

"Music For Pleasure" was released in 1977. Neither Nick Mason nor The Damned liked that album at all.
12. Which song on "The Wall" has a secret message?

It says "Congratulations, You have just discovered the secret message. Please send your answer to 'Old Pink', Care of the funny farm, Chalfont..." (spoken by Roger)
[...interrupted...]
"Roger, Caroline's on the phone..." (unknown voice, maybe James Guthrie)
13. Which synthesizer did the Floyd use for "On The Run"? (To make it more difficult I only give the company name!)

Yes, it was the famous VCS-3 - but that would have been too easy...
14. Which album features a guitar-synthesizer?

It was a Roland GR-500, the first guitar-synthesizer to hit the market. (Also used by Genesis and Queen)
15. Who produced Syd Barrett`s second album, "Barrett"?

June Bolan: "Syd Barrett had this quality like a candle that was about to be snuffed out at any minute. Really all illumination. An extraordinary, wonderful man. He took lots of LSD. Lots of people can take some LSD and cope with it in their lives, but if you take three or four trips every day..."
(As quoted by Gian Palacios for his article "Beyond the Wildwood with Brother Syd")
17. "I'm so afraid of mistakes that I made, taking every time that I wake, I feel like a hard-boiled butter man". Which song are these lines from?

The Floyd renamed their album "Eclipse" but later came back to the original title because the album by Medicine Head flopped.
19. Who did not write lyrics for "David Gilmour"?

Snowy White toured with Pink Floyd during the 70s. Later he worked with Roger Waters.
21. Who spoke the opening lines for "Astronomy Domine"?

Peter Jenner was the first manager of the Floyd.
22. When was "Arnold Layne" released?

"Arnold Layne" was the first official release of Pink Floyd and made it into the Top 20. Feb. 27 was the recording date of this single; May 23 was the release date of their second single, "See Emily Play".
23. Complete this "Biding My Time" lyric: "Wasting my time, Resting my mind And I'll never pine For ________"


Answer: the sad days and the bad days

" And I'll never pine
For the sad days and the bad days
When we was workin' from nine to five.
And if you don't mind
I'll spend my time
Here by the fire side
In the warm light of her eyes."
24. Which track has a part called "Celestial Voices"?


Answer: A Saucerful Of Secrets

It`s the last part of the track, where David sings. They also played it as a single track in "The Man and The Journey".
25. Who played drums on "When The Wind Blows"?

Freddie is closely related to members of the Ray Krenek Orchestra, a family polka band that has existed in Texas since the mid-1800's.
Source: Author hexaChord 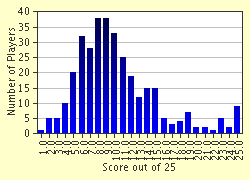 
Other Destinations
Explore Other Quizzes by hexaChord