Animals at the Gates of the Division Bell Quiz

A second Pink Floyd quiz...but more difficult! Do you know the lyrics, band members, and anything about the greatest band in history?!

Share on Facebook
Share on Twitter
Share by E-Mail
Author
Tricksta28
Time
5 mins
Type
Multiple Choice
Quiz #
318,825
Updated
Dec 03 21
# Qns
10
Difficulty
Tough
Avg Score
6 / 10
Plays
316
This quiz has 2 formats: you can play it as a or as shown below.
Scroll down to the bottom for the answer key.

Quiz Answer Key and Fun Facts
1. What was the hit that started it all for Pink Floyd? This was a single and not originally released on any album.

"Arnold Layne", Pink Floyd's first big hit, was about a transvestite. It's B-side was "Candy and a Currant Bun". Although the song can be seen on the bonus CD of "The Piper at the Gates of Dawn", it was originally released only as a single.
2. In an interview with Roger Waters and David Gilmour, they said these two albums were horrible and were embarrased by them. Which two albums were these?

Roger said that both "Atom Heart Mother" and "Ummagumma" were horrible albums and David said he would be embarrased if somebody asked him to play something from "Atom Heart Mother" and wouldn't dream of playing any of it.
3. In the movie "The Wall", Pink has a book with poems in it. The teacher walks over and starts reading one of the poems. The lyrics of the poem are from a earlier song by Pink Floyd. Which song is this?

During the song "The Happiest Days of our Lives", the song stops for about a minute and the teacher see's Pink writing in his poem book. He then takes it and reads what he has written, which happens to be some lyrics from the song "Money" off "The Dark Side of the Moon".
4. How many known songs has Nick Mason been the lead singer for?

Not many know about his fourth song "The Merry Xmas Song", but he was also lead singer on "Scream Thy Last Scream", "Corporal Clegg", and "One Of These Days".
5. "Into the distance A ribbon of black Stretched to the point of no turning back" Which song are these lyrics from?

These lyrics are from the song "Learning to Fly" off the album "A Momentary Lapse of Reason" and is the second song on the album. This is also the first album without vocals from Roger Waters.
6. The "In the Flesh Tour" had another name for it...what was it?

It was called this because they played the entire "Animals" album in a different sequence.
7. What was the last song Syd Barret produced for Pink Floyd, and seemed to fit for his departure? Hint - this is not a well known song.


Answer: Have You Got It Yet?

An unreleased song and unknown to all except for Roger Waters. He stated "He tried to play the song again, but couldn't. He put his guitar down and left." Waters can only remember parts of the song by humming it.
8. On the live album "Is There Anybody Out There?", Pink Floyd played the whole "The Wall" album plus two additional songs. What are these two songs?

During the live performance of "The Wall", Pink Floyd added two songs to the setlist. "What Shall We Do Now"" was actually planned for the album, but it was removed before it was realeased. "The Last Few Bricks" is supposed to be an instrumental between "Another Brick in the Wall Pt. III" and "Goodbye Cruel World".
9. What was the name of Pink Floyd's first full-length soundtrack provided for the movie with the same name?


Answer: Soundtrack from the Film More

Because Roger Waters and David Gilmour had many problems, they did not want to play together, but they managed. At the end of "Wish You Were Here" Rogers called the band back on stage, and they had a group hug.
Source: Author Tricksta28

This quiz was reviewed by FunTrivia editor ralzzz before going online.
Any errors found in FunTrivia content are routinely corrected through our feedback system.
Most Recent Scores
Feb 01 2023 : Guest 193: 6/10
Jan 11 2023 : Guest 98: 10/10 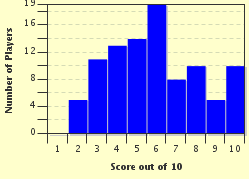 
Other Destinations
Explore Other Quizzes by Tricksta28