Here you will find ten songs including seven number ones, in which you need to choose the correct artist, song title or lyric specifics ... enjoy!

Quiz Answer Key and Fun Facts
1. Many of us enjoy a varied jewelry collection, though this artist says he "may never have much silver and gold", but he does have "something more precious and warmer to hold". Who sang this number one hit in 1984?

"I may never have much silver and gold
But I've got something more precious and warmer to hold
And that old rocking chair don't scare me like it used to
It doesn't matter, as long as I'm rockin' with you"

In 1984, "As Long As I'm Rockin' With You", was Conlee's sixth number one, totaling twelve weeks on the country charts; from his sixth studio album "In My Eyes".
2. The following line appears in which 1976 number one hit for Ronnie Milsap? "Our love keeps getting better and I'll gladly spend forever"


Answer: Stand By My Woman Man

"When she's down, she knows I'll be beside her
'Cause I'm not just her lover, I'm her friend
Our love keeps getting better and I'll gladly spend forever
standing by the woman who stands by her man"

This song spent two weeks at number one in 1976.

By 2012, Milsap had forty number one hits and twenty-six studio albums.
3. "A woman sure gets lonely When her man goes off to fight She reached out for my trembling hand As tear drops filled her eyes Then she said _______________ on the homefront too" To fill in the blank, do you recall the three words which are also part of the song's title?

For T.G. Sheppard, this song was his eleventh number one hit with three more number ones to follow.

Early in his career, T.G. once lived at Graceland ... he and Elvis were very close friends.
4. We've all heard the saying, there's no place like home ... and for most of us that's true. Well, this guy's work buddies "can't understand why a married man is in a hurry to ever go home". Who is the singer with this number five song from 1989?

Paul Overstreet's "All The Fun", was the third single (released in July, 1989) from his second studio album "Sowin' Love", peaking at number five in November of that year.
5. Here it is Saturday night. Brothers Bill and Jack are having a great time apparently, since they have a "belly full of beer and a possum in a sack". Who is the third brother looking on (the singer)?

"My brother Bill and my other brother Jack,
Belly full of beer and a possum in a sack.
Fifteen kids in the front porch light,
Louisiana Saturday night!"

Composed by Bob McDill and first recorded by Don Williams.
6. Though an unofficial holiday, Random Acts of "Kindness" Day (U.S. February 17th) is celebrated worldwide. Makes me wonder ... was this artist right on track, paving the way for RAK Day when he recorded this song back in 1969? From the chorus: "Just shine your light for everyone to see" Can you identify this highly decorated singer/songwriter/musician/actor?

Here is the second verse and chorus of "Try A Little Kindness":

"Try A Little Kindness" was a number two hit in 1969 for Glen Campbell. The song was certified gold by the Recording Industry Association of America (RIAA).

Born March 22, 1936 in Delight, Arkansas, Campbell was inducted into the Country Music Hall of Fame in 2005. In June 2011, Campbell disclosed his diagnosis of Alzheimer's Disease.
7. No one in this song is getting along ... everyone and everybody are against each other and everything. I'll name a few: The Pope, The Union, The President, The Senate, The City, The County, The State, The Banker, The Farmer, The Doctor, The Cops, The Laws and even The Devil. The singer himself says he is against: "_________ in the house" "_________ in the rain" From the below sets of words, can you pick the correct set to fill in the lyric gap?

Excluding the chorus, these are the three verses that comprise "I'm For Love":

Yes, it's Darlene's love that TGB is begging for. This song was a number one hit in 1988.

In 1993, TGB received Country Music Association's award for Vocal Event of the Year for "I Don't Need Your Rocking Chair" (George Jones with ten guest singers).
9. Below is the chorus from a 1984 number one hit by Gary Morris. Which is the correct title? "On the outside Baby's such a pretty girl On the inside baby ain't so pretty Pretty soon she'll find a lonely little world"

Early in his career, Morris worked for the presidential campaign of Jimmy Carter, performing at fundraisers. After a performance at the White House (post-election), Morris met Norro Wilson (a country music producer), who later signed him to Warner Brothers Records.
10. From a 1980 number one song, Johnny Lee sings the following first verse ... which word correctly fills in the blank? "Sometimes it seems the world's a jungle Through it all I was born to stumble Searching for _________ I never would find" 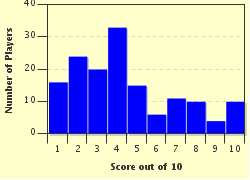